Founded in 1986, the Basic Income European Network (BIEN) was established to serve as a link between all individuals and groups interested in Basic Income (that is, a periodic cash payment unconditionally delivered to all on an individual basis, without means test or work requirement) and to foster informed discussion on this topic throughout the world. In 2006, BIEN became the Basic Income Earth Network.

Members of BIEN include academics, students and social policy practitioners as well as people actively engaged in political, social and religious organisations. They vary in terms of disciplinary backgrounds, political affiliations, age, and nationality.

The mission of the Basic Income Earth Network (BIEN) is to offer education to the wider public about alternative arguments about, proposals for, and problems concerning, basic income as idea, institution, and public policy practice. To this end, BIEN organises public conferences around the world on an annual basis, promotes research, serves as a research repository, and publishes news, research, and opinion articles. BIEN is associated with an academic journal, Basic Income Studies.

BIEN does not subscribe to any particular Basic Income scheme, but instead fosters evidenced-based research and plural debate about Basic Income. Opinions expressed on this website are not necessarily those of BIEN. BIEN remains neutral among competing arguments for and against Basic Income, and among different views on the relation of Basic Income with other ideas and policies.

BIEN is a Charitable Incorporated Organisation registered with the Charity Commission in the United Kingdom: registered charity number 1177066.

A translation in Chinese can be found here. 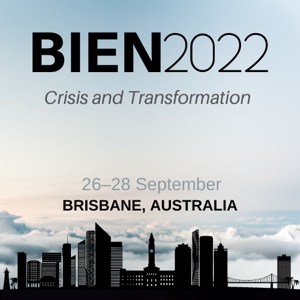