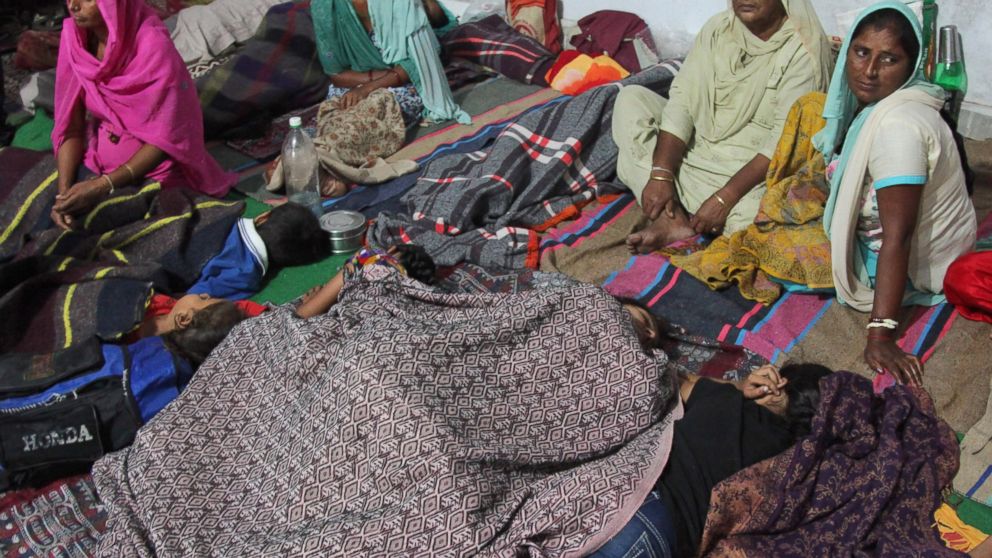 In this Thrusday, Oct. 9, 2014 photo, Indian women take shelter at Abdullian village, in Jammu and Kashmir state, India. A fierce trading of mortar shells and gunfire between India and Pakistan began Sunday night, marking the most serious violation of a 2003 cease-fire accord. (AP Photo/Channi Anand)
The Associated Press

Fighting in Kashmir between India and Pakistan subsided on Friday as Pakistan's prime minister met with advisers and military chiefs to discuss the latest spasm of violence in the disputed Himalayan region, which has killed at least 21 civilians over the past week.

The flare-up has been the most serious violation of a 2003 cease-fire accord between India and Pakistan.

The government in Islamabad said Prime Minister Nawaz Sharif convened the National Security Committee to discuss "tensions" along the so-called "Line of Control" that separates Pakistan-controlled Kashmir from Indian-held Kashmir.

A statement after the meeting said Pakistan was resolved to respond to any attempts to challenge its territorial integrity and sovereignty "with full force" and that its military was "fully prepared to deal with any adversity at our borders".

Clashes first erupted on Sunday as Muslims in the region were preparing to celebrate the key Islamic holiday of Eid al-Adha.

Over the following days, mortar-and-gunfire exchanges killed 13 Pakistani and eight Indian villagers. Scores were also wounded and tens of thousands were displaced, fleeing their homes to seek shelter with relatives in nearby villages.

Before the lull, an Indian security official said Pakistani troops used small arms and mortar shells late Thursday to target the Hiranagar sector in Indian-held Kashmir region of Jammu. The official said the intensity of the shelling was less, compared to previous days.

The top Indian administrative official in the region, who goes by the name of Shantmanu, said that Pakistani fire wounded at least 10 civilians overnight. He said 90 people, including six border guards, were wounded since Sunday and that the fighting displaced 50,000 Indian villagers.

A Pakistani security official also confirmed the lull in the fighting, saying Friday was the first day in a week that there have been "no exchanges of fire."

Both the Indian and the Pakistani security official spoke on condition of anonymity because they were not authorized to talk to media.

"Our response has been strong and measured," she said. "Fire is returned from where it comes."

Pakistan and India have a history of tense relations and fought two of the three major wars over the mountainous Himalayan region.

While the Line of Control is guarded by both the Pakistani and Indian armies, each country uses a separate paramilitary border force to guard the lower-altitude frontier, defined by coils of razor wire that snake across foothills marked by ancient villages, tangled bushes and fields of rice and corn.

India accuses Pakistan of training and arming insurgent groups which have been fighting for Kashmir's merger with Pakistan or its independence since 1989. Pakistan denies India's claim. Both claim the Muslim-dominated Kashmir region in its entirety.

View: Don't let your fur-ball miss out on the Halloween fun!
Lifestyle

View: Clinch Reflects on His Renowned Photographs
Entertainment
See It, Share It