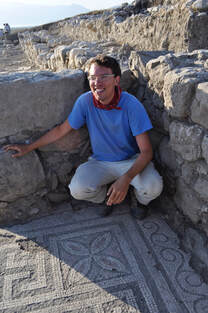 Dylan K. Rogers (Lecturer in Roman Art and Archaeology; Director, DMP Program in Archaeology) is a Classical Archaeologist, who specializes in Roman fountains and urbanism. From 2015-2019, Rogers served as the Assistant Director of the American School of Classical Studies at Athens (Greece), where he often led students on study trips throughout the Greek mainland and the islands of Crete and Sicily. He is the author of Water Culture in Roman Society (Brill, 2018), and the co-editor of the volumes, What’s New in Roman Greece? (National Hellenic Research Foundation, 2018) and The Cambridge Companion to Ancient Athens (Cambridge, 2021).

Growing up in Virginia, Rogers dreamed of becoming an Early American Archaeologist—and he once had the opportunity to excavate at Jamestown. But after living in Viterbo (Italy) in high school, he turned his attention to Classical Archaeology, and Rogers has excavated and conducted fieldwork throughout the Mediterranean. He has been a field participant on the Pompeii Archaeological Research Project: Porta Stabia, the excavations at Morgantina on the island of Sicily, and at rescue excavations near the site of Pylos in Greece. Rogers has served as a trench supervisor at the sites of Ancient Corinth in Greece and Hacimusalar Höyük in Turkey. He has been invited to excavate and be a member of the core research team of the Vulci 3000 Project in Italy. He has also acted as an Osteological Field Assistant on a project related to the restudy of human remains of the fifth-century BCE necropolis of Passo Marino at the site of Camarina in Sicily, with Dr. Carrie Sulosky Weaver. Rogers’ current research on fountains, which focuses on sensory experiences related to flowing water in antiquity, has taken him to numerous sites throughout the Roman world, including Egypt, England, France, Germany, Greece, Italy, Jordan, Portugal, Spain, and Turkey. A part of this research recently appeared in the American Journal of Archaeology (2021): "Sensing Water in Roman Greece: The Villa of Herodes Atticus at Eva-Loukou and the Sanctuary of Demeter and Kore at Eleusis."

Major research interests in the field of Classical Archaeology of Rogers include the relationship between Roman identity and art (especially sculpture and mosaics), Roman domestic religion, Roman gardens, the topography of the cities of Rome and Athens, and the reception of Antiquity from the Renaissance through the modern period. At UVa, Rogers courses include: Roman Art and Archaeology, Sex and the Ancient City, Painting in the Ancient Mediterranean World, Archaeology of Destruction, Art and Power, Pompeii: Life in a Roman City, and Senses, Architecture, and Water (graduate seminar). He also serves as the Director of the Distinguished Major Program in Archaeology, along with participating in various committees and research groups at the University, such as the Progressive Pedagogy Committee (Art Department, 2020-present) and "Classics and Racism" reading group (2019). Rogers is also the Secretary of the Charlottesville Society of the Archaeological Institute of America.