Posted By: Tri-State Transportation Campaign May 14, 2009

NJ TRANSIT and private carrier buses move a population nearly the size of the city of Cincinnati across the Hudson River every day, totaling 100 million bus passengers annually, twice as many passengers as travel into New York City by commuter rail.  A new report from the Campaign argues that the Port Authority of New York and New Jersey must do a better job of enhancing bus service across the river and accommodating existing and future bus passengers.

The report, “Express Route to Better Bus Service: How to Improve Bus Travel Across the Hudson River, and Beyond,” recommends both short and long term measures to improve bus service across the Hudson.  Recommendations include: 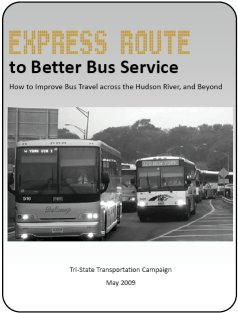 Amidst environmental and economic concerns, transit ridership in the New York region has grown significantly in recent years, according to the report.  Though the economic recession has very recently slowed ridership gains, the number of trips taken on NJ TRANSIT’s New York City-bound commuter bus routes has grown 18% over the past five years, carrying 52 million passengers in 2007, and is projected to increase another 18% by 2030 according to the Port Authority’s Strategic Plan. Interstate bus trips on carriers like GotoBus and MegaBus are also expected to grow.

The report finds that the express bus lane leading up to the Lincoln Tunnel has been so successful that is now the most efficient roadway in the country, carrying 62,000 riders in just four morning hours and nearing its capacity.  Bus system improvements are a relatively low cost way to manage limited road space more efficiently and accommodate the increased ridership that will come with the region’s economic recovery.

NY State Sen. Thomas Duane applauded the report, and noted the importance of finding places for interstate buses to park.

“I have been a longtime advocate of public transportation including enhanced bus service across the Hudson River. However, I believe it is equally important for the Port Authority to provide the charter, jitney and New Jersey Transit buses that regularly travel into Hell’s Kitchen a much-needed place to park so they no longer clog our neighborhood’s streets between trips,” Duane said. “While I was dismayed to see this idea removed from the Port Authority’s plans for the coming year, I would like to thank the Tri-State Transportation Campaign for identifying the need for this facility in its comprehensive, ground-breaking report on public transportation.”

A major finding of the report was that trans-Hudson bus service information, particularly for private carriers, is dispersed and hard to find, assuming it is available at all.  In an attempt to address that information gap, the Campaign announced a new website – www.tstc.org/bus – that demonstrates how the Port Authority could compile bus information into one, easily accessed, central location, as a companion to the report.

Get the report here.