Despite the pleas of advocates for more time, the MTA officially voted to end its lease agreement with Nassau County for the operation of Long Island Bus at its Wednesday board meeting. The county plans to turn the system over to a private operator next year, and is choosing between three companies that submitted bids to run LI Bus. 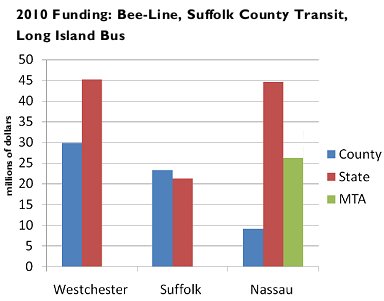 While the vote was unanimous, several board members expressed skepticism over Nassau County Executive Mangano’s ability to maintain the same level of service and fares while contributing less to a private operator than the $9.1 million the county provided to the MTA last year. The MTA had been subsidizing Nassau’s system, by $24 million in 2010, making the total local contribution to the system $33 million last year. But county officials have claimed a private bus system could be run with as little as $2.1 million in county funds annually — far less than Suffolk and Westchester Counties pay for their privately operated systems.

Some board members went so far as to say that if the County’s plans do not work out, the MTA should continue to operate LI Bus — if Nassau County takes full responsibility for operational funding.

In the meantime, the MTA begins an eight-month-long process of handing over the system to County Executive Mangano.  Transportation Nation reports that the County expects to announce a vendor for the system around May 15.  Upon this announcement, the proposed bid would go before the County Legislature for approval.

Information on the three bidders is not readily available, and multiple requests for information through the state Freedom of Information Act have been rebuffed.