Tri-State ventured down the Jersey Shore last week to get a first-hand look at the new bicycle accommodations on Route 35. Back in 2013, Tri-State was critical of the New Jersey Department of Transportation’s plan to rebuild Route 35 without any bicycle facilities, despite the fact that it’s a popular route for people who ride bikes. Fortunately we were able to work with NJDOT and they agreed to install dedicated bike lanes in some sections, with sharrows in other sections. Some of the upgrades are fantastic, while others still leave something to be desired. 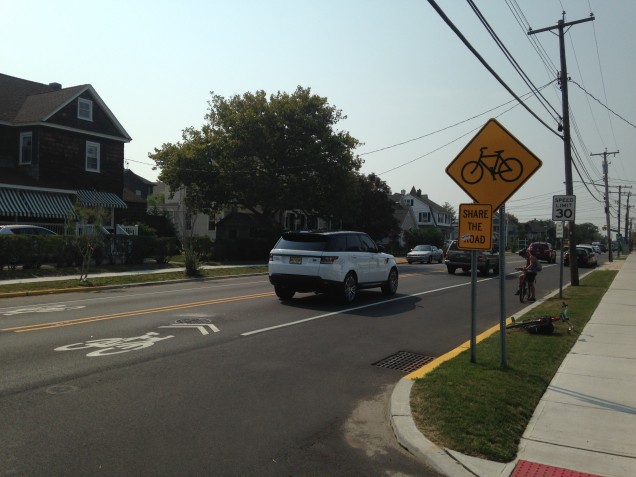 The trip began in Bay Head at the northern end of the newly revamped 12.5-mile section of Route 35. Because parking is allowed on the shoulders here, people on bikes have to share the travel lane with motor vehicle traffic. 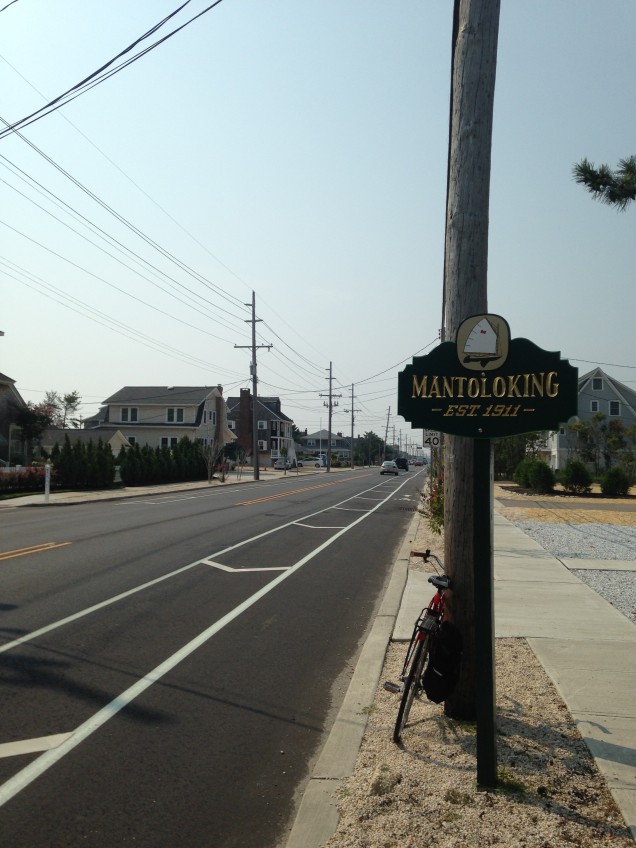 Heading south along Route 35 into Mantoloking, bicyclists enjoy a dedicated lane with a four-foot buffer.

Then, as we approached a signalized intersection, the buffer narrowed, transitioned into a dotted line, and the bike lane was supplanted by a sharrow. It’s a strange way to transition into an intersection: there’s no dedicated right turn lane here, and the roadway appears wide enough to have maintained a full bike lane (sans buffer). Perhaps a through bike lane, or a combined bike lane/turn lane would work better here, especially since, as you can see in the image on the right, that the buffered lane begins again south of the intersection. 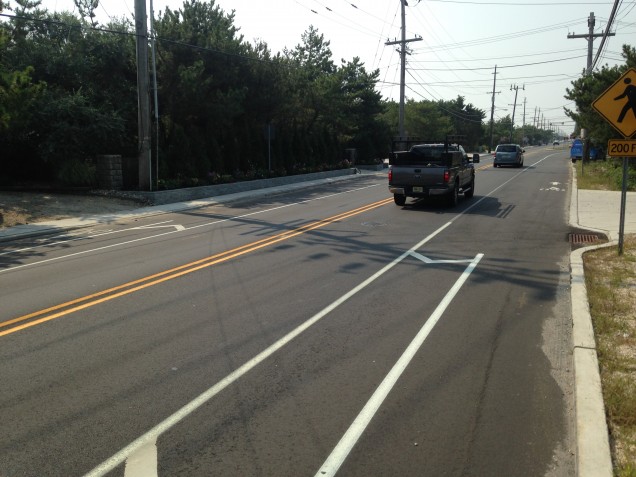 Continuing on towards Brick, the buffer disappears. 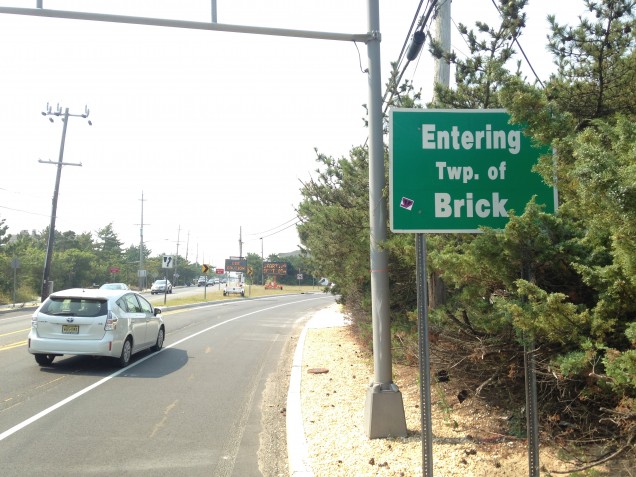 And as we enter Brick, the bike lane markings have also disappeared. 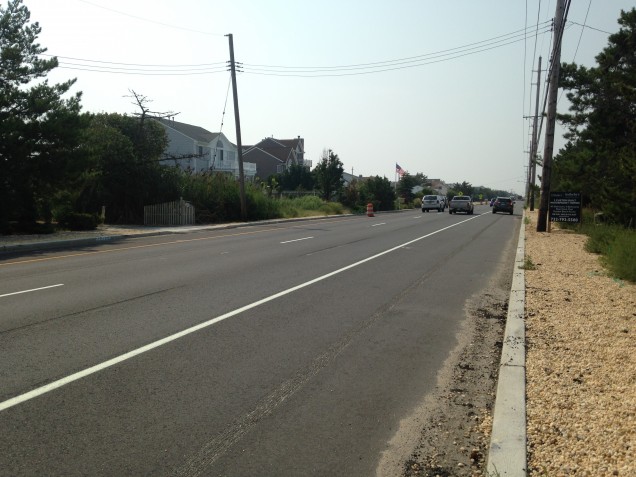 In this section of Route 35, the southbound lanes are separated from the northbound lanes, with mostly residential side streets in between them. In the southbound section, there are two travel lanes for drivers, and wide shoulders on both sides of the roadway. 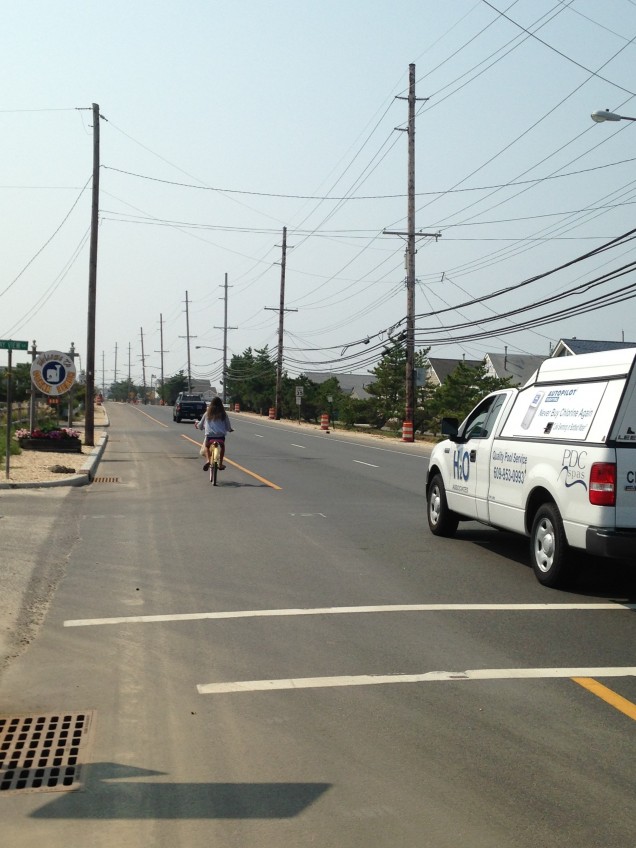 Since parking is not allowed on either side of Route 35 South in this segment, there’s a real opportunity to install some high-quality right-of-way for people on bikes. Perhaps a two-way cycle track could be installed on the east side of the roadway? Such an arrangement could provide for easy connections to the shops and restaurants on the northbound side via the many low-traffic, east-west residential streets. 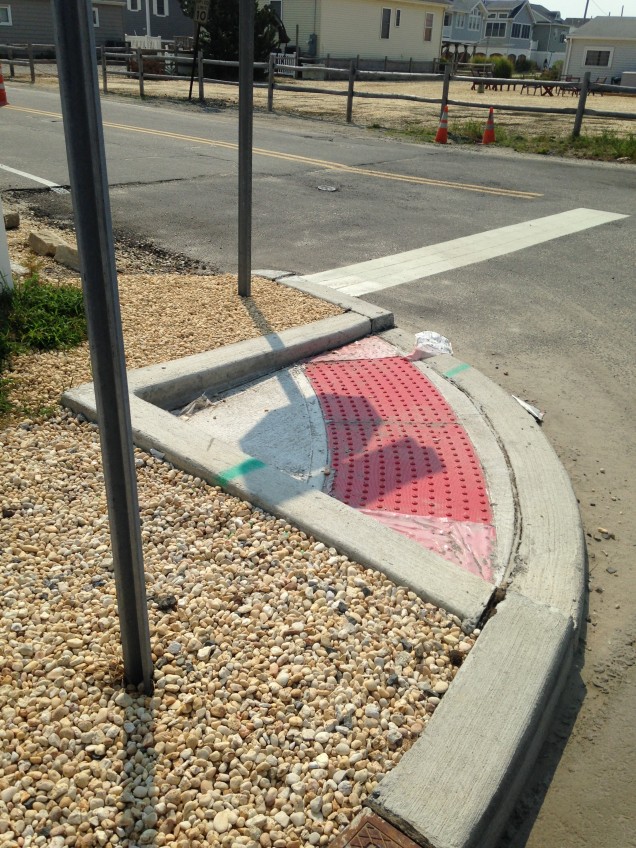 Or even better, a multi-use path, because the southbound side of Route 35 doesn’t exactly have the best sidewalks. 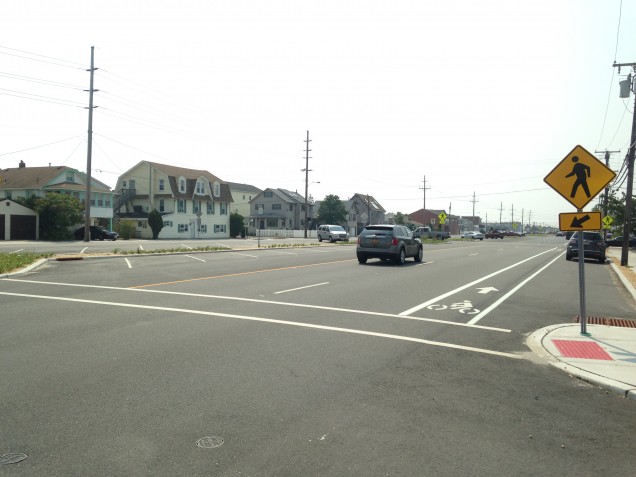 Route 35 swings westward and becomes more like an expressway south of Brick, so we continued south through Seaside Heights along Central Avenue into Seaside Park, where Route 35 and Central Avenue are coterminous once again.

There’s more on-street parking in this section, on both sides of the roadway in most areas. In the photo above, there’s angled parking in the median, with a 13-foot buffer behind the parking stalls, two 10-foot travel lanes, a four-foot bike lane, and a nine-foot curbside parking lane.

This section of Route 35 used to have three travel lanes and no buffer behind the angled parking spaces. The wide buffer (which some drivers used as a passing lane) likely provides some safety benefit for drivers backing out of parking spaces, but it shouldn’t come at the expense of wider bike lanes. A four-foot bike lane beside parallel parking is not wide enough by any standard: both AASHTO and NACTO call for bike lanes of at least five feet beside parallel parked cars.

Fortunately there’s plenty of real estate to work with here — and there’s precedent for narrower buffers behind angled parking stalls elsewhere along Route 35: 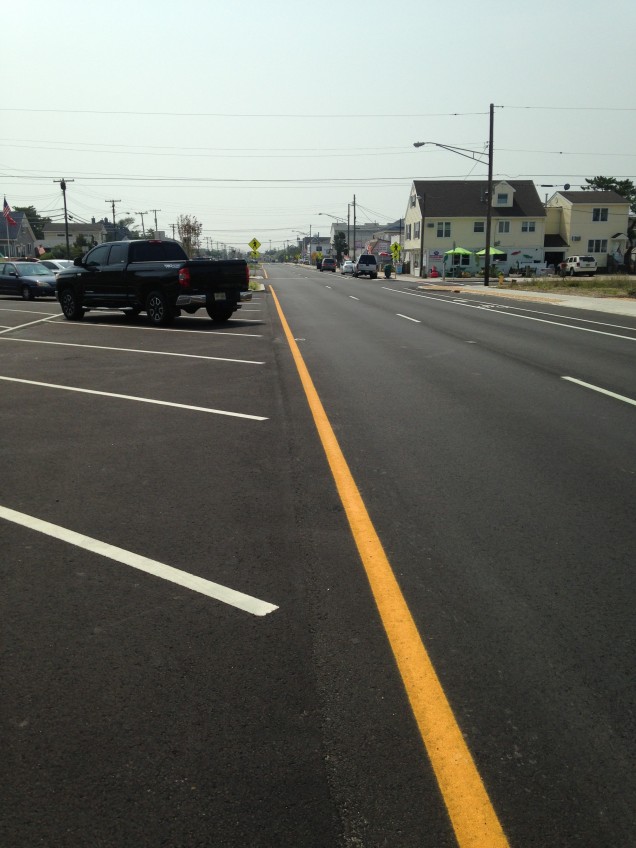 Shave a few feet from the buffer and there’s enough space for a buffered bike lane similar to the ones we used in Mantoloking. Turn the front-in angle parking to back-in angle parking, and drivers exiting parking spaces will be able to see oncoming traffic more easily, possibly eliminating the need for such a wide buffer: 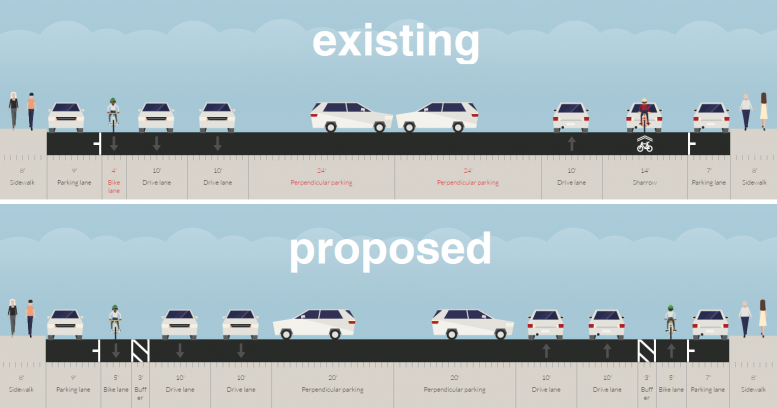 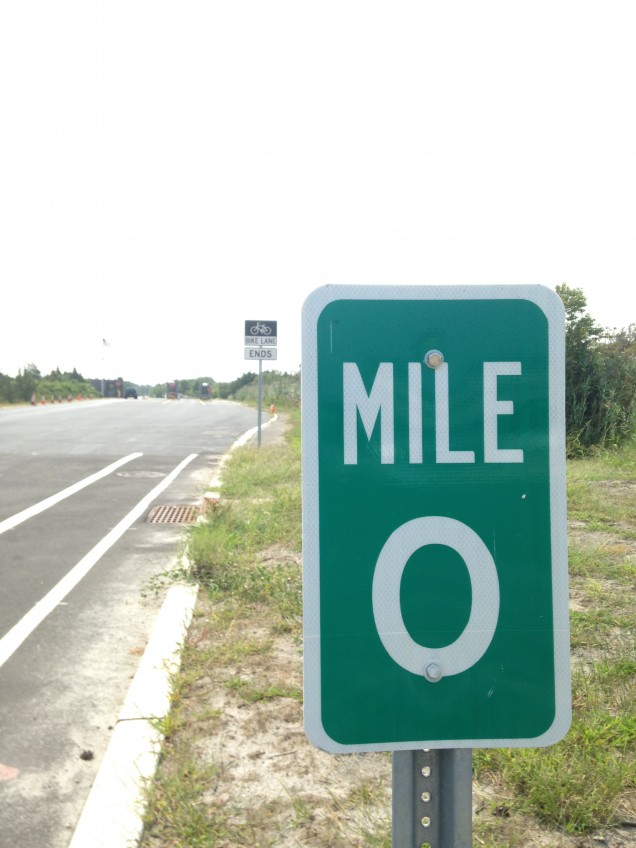 The bike lane ends at the entrance to Island Beach State Park, so we turned around and headed back north. 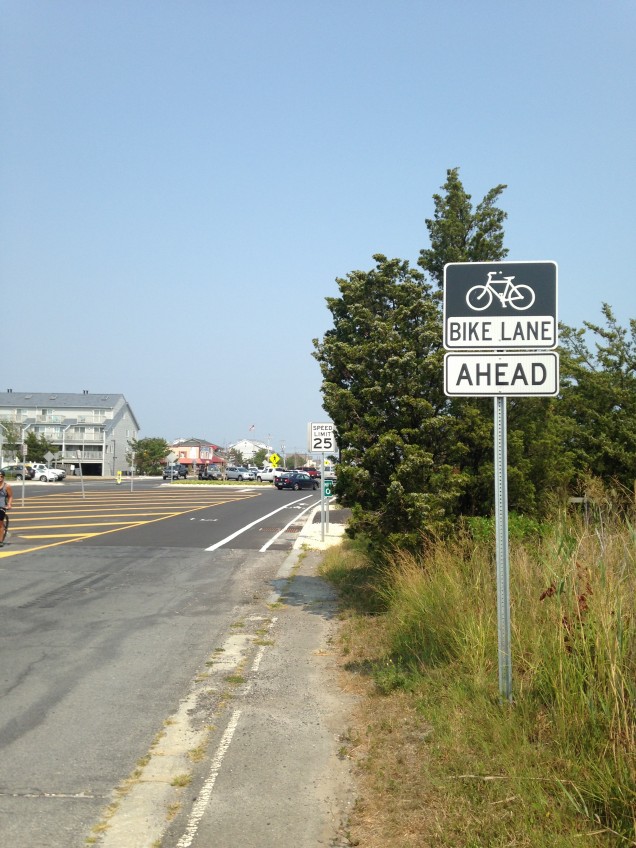 The northbound lanes are practically identical through Seaside Park. 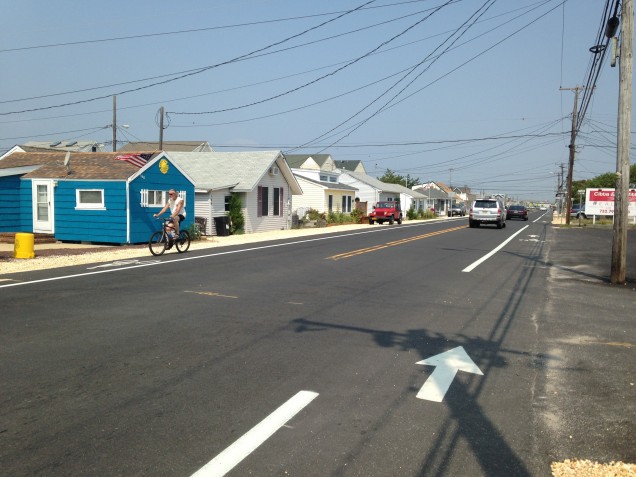 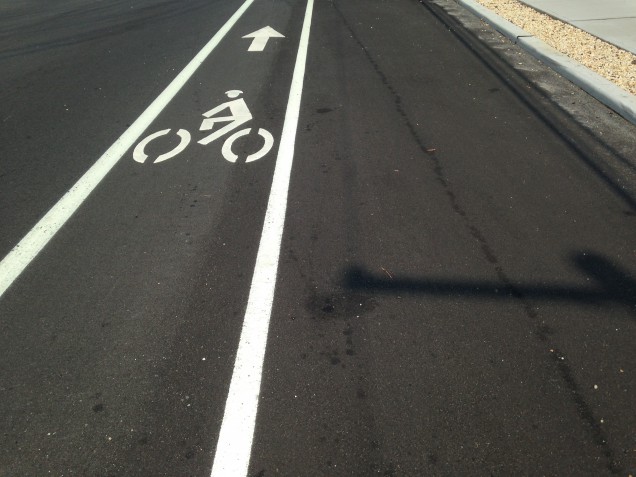 Then the parking lane returns. 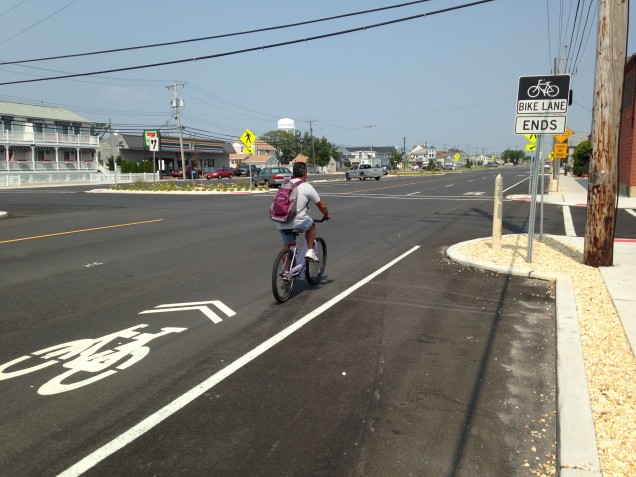 And the bike lane ends. Here again, there’s an especially wide buffer behind the angled parking in the median, and plenty of space for a bike lane. The parking lane on the northbound side is seven feet — the minimum allowed, with a 14 foot shared lane, a 10-foot travel lane, and a 13-foot buffer. Just like on the southbound side, there’s plenty of room for a full bike lanes of at least the five-foot minimum. 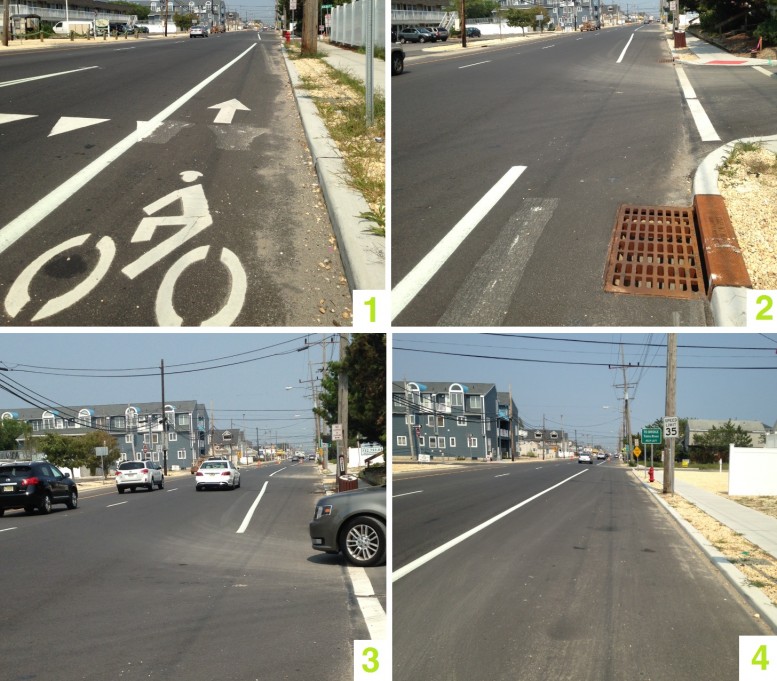 Headed north toward Tom’s River, the bike lane briefly re-appears and then transitions into a wide shoulder.

Back in Mantoloking, on the northbound side this time, we were puzzled to see sharrows when there’s a wide shoulder available. Who would want to share a lane with cars and trucks when there’s no curbside parking and the speed limit is 40 miles per hour? We didn’t.

The character of Route 35 is varied –a suburban arterial in some parts, an urban boulevard in others — and the road runs through several municipalities, each with its own set of street parking regulations. We should also point out that the rebuilding of Route 35 was divided into three separate contracts, each with its own consulting engineers. So it’s no surprise to see the corridor’s bicycle facilities change from segment to segment. What is surprising, however, is how much of Route 35 is missing dedicated bike lanes, even when there’s plenty of space for them. For example, why are bicyclists expected to share the road when they’re biking north along Route 35 in Mantoloking when there’s such a wide shoulder (which could be converted to a buffered bike lane like the one right across the street). Or why allocate space for a super-wide buffer between travel lanes and angled parking spaces, and then squeeze in a substandard four-foot bike lane beside parallel parking?

We must give NJDOT the credit it deserves for heeding our call for bike lanes on Route 35, and we applaud the progress that has been made so far. But if the department is serious about making sure bicyclists are safely accommodated on the Jersey Shore, there’s still work to be done.

1 Comment on "Route 35 on the Jersey Shore Is Getting Better for Bikes, but There Is More Work to Be Done"