Audio Cues play sound files, and thus accept sound files as their target. Audio Cues are built on QuickTime, making them able to play all file formats understood by QuickTime. These formats include WAVE, AIFF, MP3, and others. More than one Audio Cue may use the same sound file as a target. Note that compressed audio formats such as MP3 require more processing power to play than uncompressed formats such as WAVE and AIFF. Therefore, when you need to play many sounds simultaneously you will benefit from using uncompressed formats.
Audio Cues support up to 16 channels per file. (Some file formats, such as WAVE, can store more than two channels of audio in a single file.)
Audio Cues support up to 48 output channels to the designated audio device.
All Audio Cues assigned to the same audio output device are guaranteed to remain exactly synchronized. For example, if you have four stereo sound files inside a Group Cue that is set to "Start all children simultaneously", all eight channels of those files will play back with sample-accurate synchronization.
Audio Cues buffer their audio data for increased performance and decreased latency during playback. When an Audio Cue is loaded this buffer is filled.
Audio Cue Subtopics:

You may trim the head and tail of your sound file with the start and end time parameters. These may also be set visually with the waveform display.
Times may be reset to the natural beginning or end of the file with the arrow buttons next to the text fields.
When you assign a new file to the Audio Cue, the start and end times are reset to the natural beginning and end of the file.

The loop start and loop end times specify a portion of the file which you may choose to loop. These times may fall anywhere between the overall start and end times.
By default, the looping section will play through only once. (In other words, the looping section does not loop.) If you increase the play count to 2 or more the looped section will play the specified number of times.
The loop times may also be set visually with the waveform display.

Dragging the start time bar to remove silence at the beginning of a file.
You may adjust the start and end times by dragging the white time bars left and right across the waveform. (The bar is hidden if the start time is zero or the end time is the very end of the file.) If the cue is set to have any loops, you may also adjust the loop start and loop end times in the same way. (The looped section is drawn in green and outlined by a green rectangle.)

Click and drag to select a region.
When a region is selected the cue will temporarily only play that region (and loop it indefinitely). When the waveform view has focus the preview key will play and pause the cue. (The preview key is set in the workspace preferences—it is 'V' by default.)
Use the quick-set buttons at the top left to set the start and end (or the loop start and loop end) of the cue from the selected region.

The looping portion has been set from the selected segment.

You may customize the shape of the fade by clicking near the yellow fade curve to add a control point. Drag the control points to achieve the desired shape.

To adjust a volume knob or slider, click on it and drag the mouse up or down. Option-clicking on a knob or slider will alternately set the value to -INF dB (if not already -INF) or 0 dB.
The volume knobs and sliders are colored according to whether they are "live" or "dead". Saturated, opaque sliders and knobs are live, while gray transparent ones are dead. This distinction indicates that not all channels will apply to all output devices.
Each slider of an Audio Cue can be assigned a gang using the Gangs button. You assign any name as the gang of each channel. All channels with the same name will be adjusted together when you drag the volume sliders.
You can set default Gangs for new cues in the Audio Cue preferences.

The Levels tab allows you to set the initial volume of the Audio Cue when it begins to play. These are the levels a Fade Cue will adjust.
For example, consider fading a sound in from silence to full volume. You would first set the master level for the Audio Cue to -infinite dB. This will cause the Audio Cue to be silent when it first begins to play. You would then create a Fade Cue that adjusts the master level up to 0 dB. This would fade the sound to full volume.
If you have a Pro Audio License you can access up to 48 output channels with each Audio Cue.
When an audio cue is playing the current average power level and peak hold level are displayed inside the output sliders.

A stereo audio file routed to a two channel output device.
QLab dynamically adjusts the layout of the levels tab depending on how much space is available.

To conserve space the crosspoint knobs have been moved next to the output sliders.

The Trim tab allows you to adjust the final overall volume of each output channel. An example of their use would be if you have a series of fades operating on a single Audio Cue: the series of fades may be just right except that you want the entire sequence to be slightly louder. Instead of having to adjust each end volume of each fade separately, you can simply go to the Trim tab and change the master volume up in one place.
The Trim can only be changed manually; they can not be changed by a Fade Cue.
If you have a Pro Audio License you can access up to 48 output channels for each Audio Cue.

The Copy/Paste Levels tool is available from the Tools menu when an Audio Cue is selected. This tool can be used to copy the entire Levels matrix to the clipboard (including master, inputs, outputs, crosspoints, and gangs). Levels can then be pasted to anything that has audio levels, including Audio Cues, Fade Cues, and Video Cues.

The Audio Cue preferences allow you to map output patches to output devices, set a maximum volume limit for all audio, and set default volume levels and gangs for new Audio Cues. If you have the Pro Audio License you can also edit the global volume levels for audio devices.
To map a patch number to an audio device, click on the output patch you wish to map and drag the patch connector to the desired audio device. Note that you may have more than one patch connected to the same device.
If you have a Pro Audio License you will see buttons that allow you to edit the settings of each audio device. Those settings are described below. 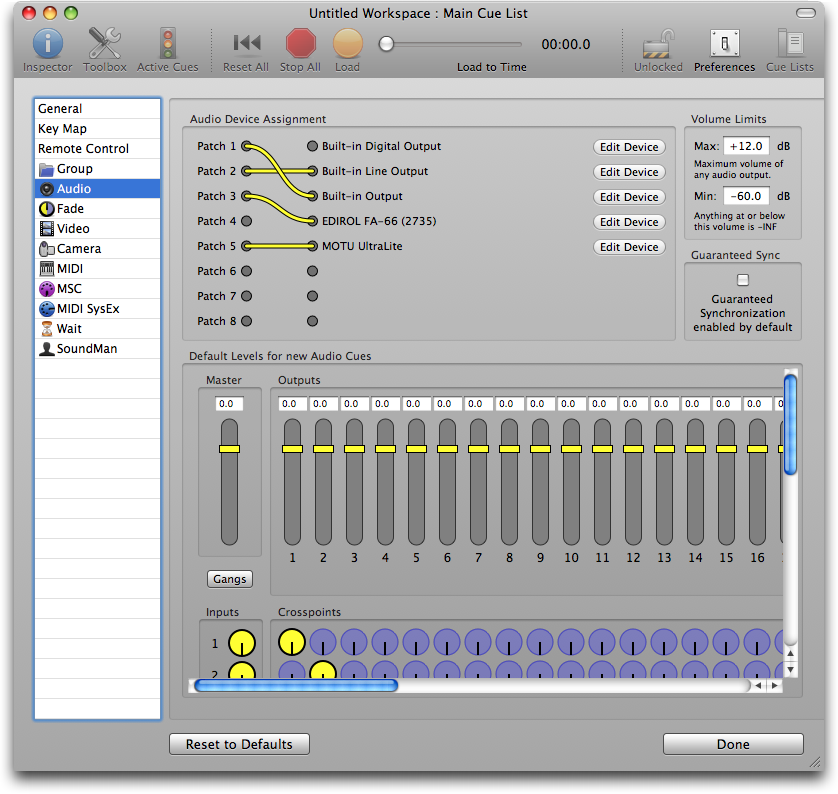 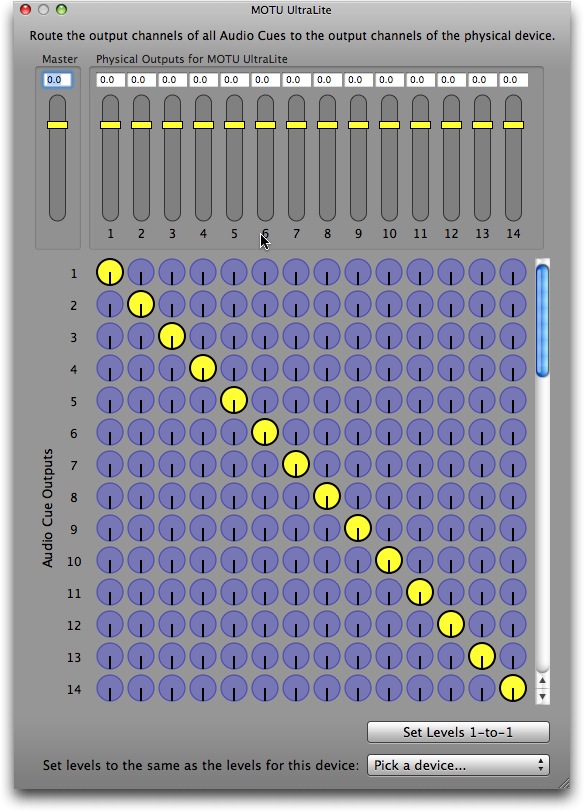 With a Pro Audio License you may adjust each audio device's master level matrix. These levels are global—the audio from every Audio Cue assigned to this output device will be affected by these level adjustments.
The crosspoints of the device matrix allow you to route Audio Cue output channels to different physical output channels on the device.
At the bottom of the device editor is a popup button which allows you to assign levels to the device from any other device this workspace has ever been connected to. This is especially useful when transferring the workspace to a new machine, where it may be necessary to set the original levels from a previous device into the global matrix for a new device.
This documentation is also available as a PDF document or within QLab under the Help menu.