The Library has a historically valuable collection of manuscripts. These range from medieval illuminated manuscripts and early modern case reports, statutes and treatises, to modern judicial opinions, correspondence, diaries and daybooks. Among medieval treasures is an illuminated Statuta Angliae nova, presented by Henry VI of England to Margaret of Anjou, and a miniature manuscript of Magna carta. Early modern material includes unpublished and notable case reports, treatises on the powers and limitations of English monarchs and discourses on the Court of Star Chamber. Modern manuscript holdings include US judges’ opinions and docket notebooks, as well as the Library’s extensive collection of early American law student notebooks from the Litchfield Law School.

Manuscripts in the Italian Statute Collection, Yale Law Library is a regularly updated list of complete manuscripts and printed books with manuscript additions.

Keep in mind that the Manuscripts and Archives Department of the Yale University Library has a large and rich collection of modern manuscript collections. They have provided an excellent Legal Subject Guide on their website. “The collection contains material that is relevant to a wide range of legal and law-related topics. It is especially helpful to researchers interested in the personal papers of lawyers and legal professionals who are Yale graduates, and to those researching the development of civil liberties law, civil rights law, and U.S. foreign relations.” 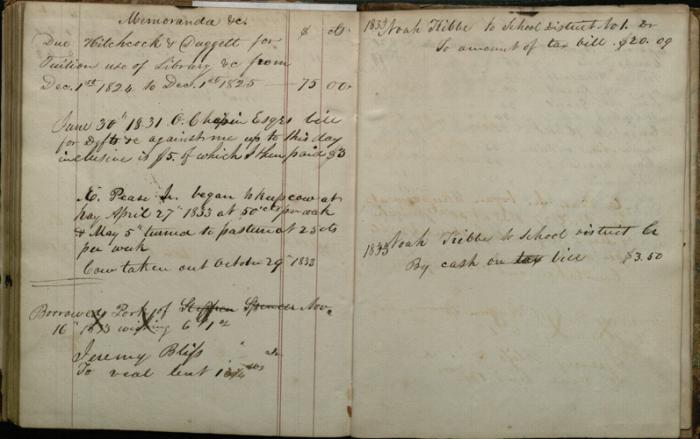 Account book of Aholiab Johnson (1799-1893) for his law practice in Stafford and Somers, Connecticut for the years 1824-1840. Gift of Lois s. Montbertrand (yale Law School Class of 1985). The first entry on the left records the $75 tuition for 1824-1825 that Johnson paid Samuel Hitchcock and David Daggett to attend the law school that became Yale Law School.