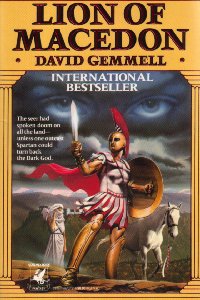 Any author who puts a bibliography in the back of his novels is begging to have his historical research taken seriously.  But when that research is so potluck as Gemmell's, the result is somewhat laughable.

Mr. Gemmell is a well-known, well-selling British epic fantasy author.  Perhaps that's why these two novels read like 'Dungeons and Dragons Does Greece,' or an episode of "Xena: The Warrior Princess."  The writing itself certainly isn't bad; both prose and plot show the experience at yarn-spinning that has made his fantasies sell into second and third printings.  But it would have been a better book had he simply dispensed with history altogether, since he does history so badly.  It is, simply put, a sloppy book, in terms of research.

Alexander isn't the protagonist, precisely.  In fact, Lion of Macedon begins decades before Alexander is even born, and the protagonist is Parmenion -- an truly interesting choice, on the face of it.  But Gemmell turns surprising twists.  In his author's note, he says, "History has all but forgotten Parmenion" -- a claim I think most historians would find amusing, at the very least -- then goes on to say, "No one can know whether [Parmenion] was the king of the Pelagonians, a Macedonian adventurer or a Thessalian mercenary."  In fact, we do have a pretty good idea, based on an inscription, that he was from the Upper Macedonian canton of Pelagonia, though whether he was basileus (king or prince) is mere speculation.  Whatever the case, there's nothing in the historical record to suggest he was NOT a Macedonian, and plenty to suggest that he was.

But Gemmell, in the end, inexplicably chose to ignore all three of his stated possibilities to make Parmenion a Spartan.  Authors do sometimes effect changes in historical facts for dramatic purposes ... but a change of this magnitude requires the author to then use that change in a correspondingly clever way, or at least to explain his reasons.  Gemmell does neither. 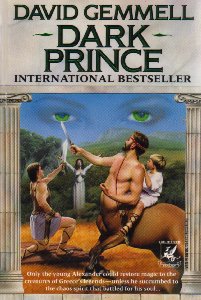 Historical accuracy goes downhill from there.  We do find occasional correct mention of obscure details from Macedonian history (lifted, no doubt, from N.G.L. Hammond).  Yet these are frequently set in bizarre juxtapositions beside complete misunderstandings of the court.  Either Gemmell didn't read carefully -- or he didn't care.  Other assorted details demonstrate further lack of understanding for or familiarity with ancient Greece or ancient Macedonia.  He mentions diamonds (the Greeks had never seen diamonds), he puts Parmenion in trousers at one point (no self-respecting Greek would wear trousers without a damn good cause), and he has Greek ships sitting at anchor off-shore instead of beaching for the night (they had anchors but normally beached -- particularly triremes).  Such detail errors might be forgiven if there were fewer of them, but in taking notes while reading, I filled twelve pages with just such "minor" inaccuracies.  At that point, the sheer weight of error makes them a major annoyance.  And the excuse, "But it's just fiction!" doesn't cut any mustard.  Practice the art of getting it right -- or write something else.  As noted at the outset, Gemmell would have done better to have stuck to pure fantasy adventure, not attempted quasi-history.

Another problem just as serious as Parmenion's Spartan heritage is Gemmell's use (or abuse) of Greek magic.  Fellow fantasy author Judith Tarr used the ancient's view of magic quite well in her Lord of the Two Lands.  But Gemmell's duology imposes a completely foreign type of magic on ancient Greece.  One almost expects to see elves and dwarves pop up.  His chief bad guy is the "Chaos Lord" and while it's true that Hesiod mentions Chaos as the first immortal being in his Theogony, Gemmell's Chaos sounds more like Tolkien's Lord Sauron, or perhaps the Christian Devil, than like anything the Greeks would have recognized.  Alexander is the son of this Chaos Lord, making him something like The Beast.  Much of the second novel concerns Alexander's attempt, with the aid of Parmenion and a Merlin-like Cheiron, to conquer the demonic side of his nature.  (In the end, he fails.)

What makes this alien magic especially sad is that the Greeks did have a rich mythology, as well as a tradition of magic, curses, binding spells, and witchcraft.  Chthonic Hekate was the goddess of witches, and Alexander's mother Olympias was, in fact, accused of being a witch even in antiquity -- but Gemmell makes no use of this bit of ancient gossip.  Instead, the "witch" in his novel is one of Olympias' servants and Olympias appears as a rather silly young girl.

So not only is the book guilty of gross historical misrepresentation and error, it is also guilty of serious oversight, as well as a fundamental misunderstanding of the Greek world view.  It seems, though, that Gemmell is not alone in these distorted perceptions.  SF/F Locus Magazine said, "The glory and magic of ancient Greece lives again in David Gemmell's Lion of Macedon, a sweeping historical fantasy that ... draws a detailed picture of the Grecian world just prior to the birth of Alexander the Great."  The reviewer from Locus apparently knows even less about Greece than Gemmell does.