historical region, Asia
Alternate titles: Anadolu, Asia Minor
print Print
Please select which sections you would like to print:
verifiedCite
While every effort has been made to follow citation style rules, there may be some discrepancies. Please refer to the appropriate style manual or other sources if you have any questions.
Select Citation Style
Share
Share to social media
Facebook Twitter
URL
https://www.britannica.com/place/Anatolia
Feedback
Thank you for your feedback 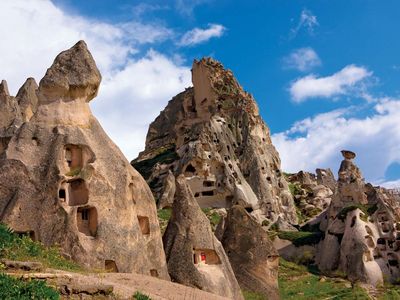 Where is Anatolia located?

Anatolia, also called Asia Minor, is the peninsula of land that today constitutes the Asian portion of Turkey. In geographic terms Anatolia may be described as the area in southwestern Asia bounded to the north by the Black Sea, to the east and south by the Southeastern Taurus Mountains and the Mediterranean Sea, and to the west by the Aegean Sea and Sea of Marmara.

When did the Mongols rule Anatolia?

In 1243 the Seljuq sultan Ghiyās̄ al-Dīn Kay-Khusraw II was crushed by the Mongol commander Bayjū at Köse Dağ between Sivas and Erzincan, and the Anatolian Seljuqs became vassals to the Mongols. In 1335 Mongol power collapsed, clearing the way for the political fragmentation of the beylik (principality) period in Anatolia and the rise of the Ottoman Empire.

When did the Phrygians arrive in Anatolia?

Greek tradition usually dates the migration of the Phrygians to Anatolia from Europe to roughly the period of the Trojan War in the early 12th century BCE.

When did Anatolia become part of the Ottoman Empire?

Turkish tribes created the Ottoman Empire in Anatolia, and it grew to be one of the most powerful states in the world during the 15th and 16th centuries. The Ottoman period spanned more than 600 years and came to an end in 1922, when it was replaced by the Turkish Republic.

Anatolia, Turkish Anadolu, also called Asia Minor, the peninsula of land that today constitutes the Asian portion of Turkey. Because of its location at the point where the continents of Asia and Europe meet, Anatolia was, from the beginnings of civilization, a crossroads for numerous peoples migrating or conquering from either continent.

This article discusses the history and cultures of ancient Anatolia beginning in prehistoric times and including the Hittite empire, the Achaemenian and Hellenistic periods, and Roman, Byzantine, and Seljuq rule. For later periods, see Ottoman Empire and Turkey, history of.

Anatolia may be defined in geographic terms as the area bounded to the north by the Black Sea, to the east and south by the Southeastern Taurus Mountains and the Mediterranean Sea, and to the west by the Aegean Sea and Sea of Marmara; culturally the area also includes the islands of the eastern Aegean Sea. In most prehistoric periods the regions to the south and west of Anatolia were under the influence of, respectively, Syria and the Balkans. Much visible evidence of the earliest cultures of Anatolia may have been lost owing to the large rise in sea levels that followed the end of the last Ice Age (about 10,000 years ago) and to deposition of deep alluvium in many coastal and inland valleys. Nevertheless, there are widespread—though little studied—signs of human occupation in cave sites from at least the Upper Paleolithic Period, and earlier Lower Paleolithic remains are evident in Yarımburgaz Cave near Istanbul. Rock engravings of animals on the walls of caves near Antalya, on the Mediterranean coast, suggest a relationship with the Upper Paleolithic art of western Europe. Associated with these are rock shelters, the stratified occupational debris of which has the potential finally to clarify the transitional phases between cave-dwelling society and the Neolithic economy of the first agricultural communities.

In the Middle East the first indications of the beginning of the Neolithic transition from food gathering to food producing can be dated to approximately 9000 bce; the true Neolithic began about 7300 bce, by which time farming and stock breeding were well established, and lasted until about 6250 bce. The Neolithic was succeeded by the Chalcolithic Period, during which metal weapons and tools gradually took their place beside their stone prototypes, and painted pottery came generally into use. The Chalcolithic ended in the middle centuries of the 4th millennium bce, when the invention of writing foreshadowed the rise of the great dynastic civilizations of Egypt and Mesopotamia, and was followed by periods of more advanced metalworking known as the Early and Middle Bronze Ages.