Hands-on with Samsung smartwatch — is it coming to a kid near you?

By Larry Magid on September 5, 2013 in Featured, SafeKids News Analysis

Are your kids about to get a smartwatch?  Probably not if they have their heart set on the new Samsung Galaxy Gear watch that was unveiled this week.  It costs a whopping $299 and it only works with a single phone — the Samsung Galaxy Note 3.  But, as a category, it could catch on with kids if the price drops to below $100.  If it does, it will be the first time in awhile that people under 20 want to wear watches. Traditional watches are  practically an endangered species thanks to phones telling time.

But, if kids do adopt to this technology, expect lots of interesting apps and a bit of parental consternation and media fear-mongering over what might go wrong.  Clearly, the watches will be used for geolocation (ConnectSafely.org partner Glympse has already announced a location tracking app for the Samsung watch) but kids will also be able to use it to keep in touch with each other, perhaps through texting.  And the Samsung watch has a camera which means photo taking is more convenient and more but potentially more secretive. Having said that, if smartwatches do catch on with kids, I’m quite confident that smart kids will use smartwatches smartly, as most do with phones and computers.

What follows is my first-look as published on Forbes.com

Samsung took the wraps off its Galaxy Gears smartwatch ahead of the IFA trade show in Berlin today, along with a new Galaxy 3 smartphone and a new Galaxy 10.1 tablet.

The phone and tablet have some interesting new features, but the buzz is all about the new watch.  The day before the announcement Samsung invited journalists for a sneak-peak and a little hands-on time. Clearly, a few minutes with a pre-release product is not equivalent to a full review, but it did give me a sense of how the product works and why some people would — or wouldn’t — want to own one.

And before you get too excited about the watch, know that it’s an accessory to Samsung’s new Galaxy Note 3.  It’s not a stand-alone device nor does it work with other smartphones or tablets, at least not yet.  A Samsung spokesperson said it will likely work with other Galaxy phones at some point, but not on day one.  So, if you’re thinking of getting “Galaxy Gear,” as they call it,  you’ll also need to buy a new Note 3.

At 1.44 by 2.2 by .44 inches, weighing 2.6 ounces (1.6 inch diagonal screen), it’s not the most demure watch on the planet but it is about as stylish as you can get for a watch with a glass and metal case and a plastic band.  The band comes in six colors: Jet Black, Mocha Gray, Wild Orange, Oatmeal Beige, Rose Gold and Lime Green.

Although the watch has some stand-alone features (time, pedometer and other downloadable apps), it’s mostly used as a companion to the soon-to-be-released Note 3 phone.  When paired to the phone via Bluetooth, you can use it as a speaker phone (there are two microphones for noise cancelation and a speaker on the band). Voice commands allow you to use it hands-free such as when you’re driving or carrying groceries with both hands. There is also a mini-phone dialer that you can tap with your fingers.  On my one test call, sound quality for both sides of the call was pretty good.  Not quite as good as if you’re talking directly on the phone, but very close. 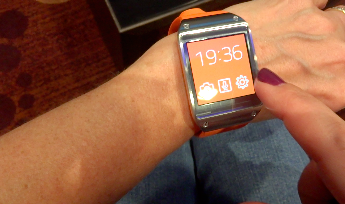 Galaxy Gear is expected to be available in the United States in October for $299.

The watch’s 1.9 megapixel still and video camera is pretty low resolution by today’s standards, but is convenient to snap a picture just by pressing an icon on the screen  The lens is on the side of the band so you can take a picture while you hold up your hand, as if you were checking the time. Unlike Google Glass, the watch doesn’t light up while you’re taking a picture, which could become a privacy issue.  Pictures can be viewed on the watch but are also transferred to the phone. The watch also has a voice recorder.

The watch can also be used to read emails and text messages and control music on the phone. The user interface consists of a home button and gestures like double tapping and swiping to bring up menus and swiping across the screen to go from one app to another.  On the pre-release device I tested, the gestures weren’t as responsive as I would hope for, but perhaps that will improve with the final product as well as time getting used to it.

A number of apps, including Glympse location tracker and RunKeeper fitness tracker will be available at or near launch. Other third party apps include Evernote, Path, Banjo, eBay and Pocket (a way to save web content to view later on any device).  See the chart on the next page for additional apps.

As you might expect from a device with a radio, a processor, a camera and a bright screen, battery life will be limited.  A Samsung executive told me that users will likely get about a day’s worth of use on a charge, depending on how much they use it and what they do with it.  There is no direct port to plug in a charger but the watch comes with an optional dock that connects to a standard Micro USB charging cord.  The charger is small and stylish but it is one more thing to carry.  Personally, the battery issue is probably my biggest single problem with this and other smartwatches.  It’s one more thing to have to remember to charge up everyday and its charger is one more thing to have to take with you when traveling.

As I said, a few minutes of hands-on is no substitute for a full review, but based on what I saw, it appears as if Samsung did a good job in creating a reasonably stylish smartwatch at a size and weight that will be palatable to many users.

My general thought about this and other smartwatches is that — while a nice accessory — it’s not yet a game changer. Based on the bundled apps, the watch doesn’t do anything that your phone doesn’t already do, so it’s main value as a phone accessory is allowing you to read your messages, snap photos or take calls without having to reach into your pocket to pull out your phone.  As with all devices that run apps, the real value of the phone will be in what the apps bring to the party and, frankly, I’m just as excited about the pedometer and promise of other standalone apps as I am in how the watch acts as a remote control and screen for a smartphone. I’m also anxious to see what enterprise and professional apps emerge. I can imagine this watch coming in handy for medical professionals, repair people and others who need information while using both hands for their work.

The hassle of having to charge it daily dims my enthusiasm.  I also question whether this or any other smartwatch solves a big enough problem to be universally compelling. After all, it’s not all that hard to take your phone out of your pocket. But I’m not passing judgement quite yet because I’d like to see how well the watch does in real-world tests and how useful it is when I have the chance to live with it for a few weeks.

What I can say is that I’m glad that Samsung was willing to take a chance.  Not all innovations succeed in the marketplace but they do advance the bar and often lead to better ideas down the road.

Challenging ‘Internet safety’ as a subject to be taught

Connectsafely’s new Parents’ Guides to both Instagram and Snapchat.