access over 3,600 websites and 1.9 million pages
about Australia's culture and recreation

Check out our top Australian Stories:

We have been embarrassingly ignorant about what actually happened in the many millions of years during which, Australia, our 'island ark', drifted in the southern ocean, but this ignorance is rapidly being dispelled. 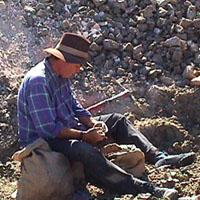 Our quota of biota

Pioneering fossil studies were undertaken in the Tirari Desert in South Australia by palaeontologists in the 1960s and 1970s. Since then Professor Michael Archer, with his team at the University of New South Wales and other colleagues from throughout Australia, have been responsible for discovering new information about the 100 million year history of our biota.

Fossils found at Lightning Ridge suggest that 110 million years ago Australia supported a number of different monotremes, but did not support any marsupials. Marsupials appear to have evolved in the northern hemisphere about 95 million years ago and spread to South America.

The first evidence we have of marsupials in Australia comes from the 55 million year old fossil site at Murgon in southern Queensland. This Murgon site has yielded a range of marsupial fossils, many with strong South American connections.

The Australia/America link is not surprising - Australia was linked to South America by Antarctica when Australia was part of the ancient land of Gondwana.

This connection between Australia and the Americas also enabled Australia's fauna to migrate with the result that a platypus has been found in 63 million year old rocks in Patagonia, South America.

As Australia drifted northwards after breaking free from Antarctica some 40 million years ago, this menagerie of strange and wonderful creatures was incubated in isolation.

The result has been a continent of biota unlike any other in the world.

Strange and unexpected beasts in our past

After a decade of work by Professor Archer and his team in collaboration with more than 80 scientists at a number of key fossil sites in Australia, an amazing array of strange, unexpected beasts is being discovered.

Yet these finds are not just about our past. This evidence of our past is essential in our efforts to understand and conserve what remains.

Undoubtedly the key site in this understanding is Riversleigh in north-west Queensland. Added to the World Heritage List in 1994, along with Naracoorte in South Australia, the fossils from Riversleigh represent an almost complete story of the evolution of Australia's terrestrial ecosystems over the past 25 million years. Riversleigh has been recognised as one of the most important fossil sites in the world.

Discoveries at Riversleigh continue to fill in the gaps in last 25 million years of Australian fauna history.

Some of the most recent finds include a jaw from a possum which is represented today by the Striped Possum from the rainforests of north-east Queensland and New Guinea; an almost complete skeleton of a thylacine (Tasmanian Tiger) and a bat which appears to be the ancestor of a New Zealand bat previously thought unique. 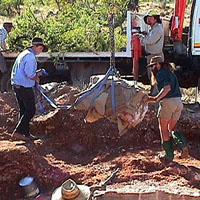 Professor Archer and his team, accompanied by Earthwatch volunteers, made further spectacular finds during their field trip in 1998. Several skulls from a wide range of ancient marsupials were recovered, but undoubtedly the major discovery was that of a complete skeleton of a 20 million year old diprotodontid, a large cow-sized herbivore.

A field trip to sites in the Tirari Desert near Lake Eyre, by Professor Archer's team, in association with the South Australian Museum, also produced a number of interesting specimens. These are the same sites where a lot of the pioneering work during the 1960s and 1970s on Australian fossils was done.

Discoveries from these sites, and other sites like Murgon, Lightning Ridge and Wellington Caves, are featured in the Australia's Lost Kingdoms exhibition developed by the Australian Museum, the Riversleigh Society and the University of New South Wales.

Providing the most comprehensive understanding

This major project tells the story of Australia's incredible evolution and will incorporate the latest fossil findings to provide the most comprehensive understanding of our ancient fossil history.

The exhibition enables people throughout Australia to appreciate what has gone into the natural creation of our unique environment and, more importantly, what this prehistoric record tells us we need to do if we are to help our modern biotas survive into the future.

The warnings are there in the fossil evidence. At least six different species of thylacines have been identified from the fossil deposits at Riversleigh. The number of thylacine species at Riversleigh decreases as the sediments become more recent, and we now know from other fossil sites around Australia of the thylacine's tragic decline in diversity and geographic range over time.

The thylacine example indicates that our study of Australian fossils is much more than interesting scientific research. By studying the evolution of both individual species and almost complete terrestrial ecosystems through time, we can better understand our present environment and the conservation status of our fauna.

During the celebration of the Centenary of Federation, this exhibition has reminded Australians of their extraordinary natural heritage and the responsibility they have to ensure its survival into the future. The exhibition provides Australians with the opportunity to learn more about the amazing history of their unique land.