access over 3,700 websites and 2 million pages
about Australia's culture and recreation

Check out our top Australian Stories:

With the establishment of the Colony of New South Wales in 1788, there was a need for land which was suitable for European agriculture. After the arrival of the First Fleet in Sydney, it quickly became apparent that the Colony needed to find suitable land and soils if the new Colony was to support itself.

Early on, in the first decades, farms were established at Parramatta. Later, many explorers were sent, or volunteered to travel north and south along the coast, and west into the inland to find sources of fresh water, sites for other settlements and suitable land for grazing sheep and farming. 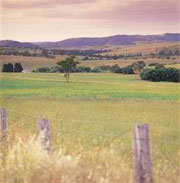 As explorers attempted to travel west into the inland, they were met with huge mountains, cliff faces and deep valleys. This part of the Great Dividing Range is known as the Blue Mountains and for many years they were feared as impassable - as no way through them could be found.

In 1818, three men – Blaxland, Lawson and Wentworth, who owned land near Sydney, were keen to find new areas for their sheep to graze. Despite the failures of other explorers, they decided to try and find a way through the mountains to see if there was good pastoral land beyond.

Led by Blaxland, they found a passage to the western plains, beyond the range, by following the top of a ridge. This route was based on earlier observations and explorations of the main ridge by George Caley, Francis Barrallier and John Wilson. Blaxland, Lawson and Wentworth saw that the land beyond the mountains was excellent for farming. Soon after their discovery of this track through the mountains, a road was built. Settlers began populating the area, bringing their livestock to graze on the open plains.

However, Aborigines had inhabited the Blue Mountains for at last 14,000 years before Blaxland, Lawson and Wentworth found the track through the mountain range. Evidence of their early occupation is visible today throughout the Blue Mountains area with many camp sites, axe grinding grooves, rock engravings, other art sites and stone tools evident. Today, all these relics are preserved and are under protection.

The name of the well known rock formation The Three Sisters, recognises its significance as a site to the Gundungurra people as part of their Seven Sisters Dreaming story that tells of a witchdoctor who turned three sisters into stone in order to protect them during a tribal battle.

Many places within the the Great Dividing Range are considered sacred sites by Aboriginal people. For example, the rocky outcrop we know as Mount Warning, was known as Wollumbin by the Bundjalung people. The Bundjalung dreamtime story of Wollumbin, tells us he is the Warrior Chief of the mountain.

The Bundjalung people believe the spirits of the mountains were warriors and the wounds they received in battle can be seen as scars on the side of the mountain. They say thunder and lightning are the effects of their battles. When you look toward Wollumbin from the north, you can see the face of the Warrior Chief in the mountain's outline.

In the Bogong Ranges, part of the Great Dividing Range, traditional Indigenous life included annual migrations of thousands of Aboriginal people from the valleys and plains up to the cooler summer climate of the Range. Here they would camp, just below the tree line, and feast on cori, Bogong moths (Agrotis infusa).

A way through in Queensland and Victoria

Cunningham's Gap, Queensland. Explorers can be seen in the foreground.
Image courtesy of the State Library of Victoria

Other explorers, such as Hume and Hovell, Major Mitchell (the Surveyor-General of New South Wales), Strzelecki, John Oxley and Allan Cunningham all explored the mountains and regions beyond the Ranges. Allan Cunningham joined John Oxley's expedition to the Lachlan and Macquarie rivers in 1817.

Cunningham, a botanist and explorer, found a way through the Range. Sent by Joseph Banks to New South Wales in 1816 to collect plants, Cunningham originally travelled inland from the Hunter River, in New South Wales north to the flat grazing lands of the Darling Downs, which he named. He was trying to find a route through to Moreton Bay but the mountain ranges were too steep, his party were running out of supplies and his animals were getting too weak.

Cunningham returned to Sydney and decided to explore inland from Moreton Bay the year after, 1828. He then found a way through the mountains, which is now called Cunningham's Gap. This opened up a 'road' for many settlers to travel to the Darling Downs with their flocks and herds, although the way was very rugged.

Hamilton Hume and William Hovell travelled together in 1824 on an exploratory expedition from NSW to near present day Geelong. The Explorer's favourable report on the country around Port Philip encouraged the pastoral expansion of the colony. 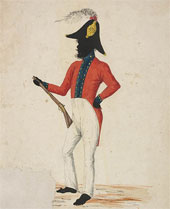 The Aborigine Piper, who accompanied Mitchell on his expeditions. Lithograph by Fernyhough, Sydney, c. 1836.
Image courtesy of the State Library of New South Wales.

Major Mitchell made a number of journeys into Australia's inland accompanied by the Aborigine Piper. In the mid 1830s on a trip south west, into what is known today as the state of Victoria, Mitchell found grazing land richer than he had seen in New South Wales.

John Piper was an Aborigine of the Wiradjuri people who accompanied Major Mitchell on his explorations in Victoria, and on his nine-month-long survey of the rivers of the Murray-Darling system. His advice and expertise was recognised with the gift of an old firelock gun, blankets, Mitchell's red coat, and a cocked hat which once belonged to Governor Darling. Piper was represented in this outfit by several colonial artists.

Mitchell named the Grampians Ranges – the western most tip of the Great Dividing Range and the pasture land around it 'Australia Felix'. The word felix is a latin word that means blessed or fortunate.

On his return to Sydney, Mitchell's news started a land rush of people keen to settle these areas and benefit from its rich soil and open plains.

Search over 3,500 Australian websites for information about: