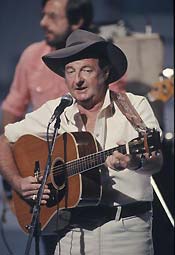 Country music, a derivative of folk music, originated in southern and western USA and consisted mainly of rural songs accompanied by a string instrument, usually a guitar or fiddle.

Country music in Australia has its origins in the folk songs sung from the 1780s to the 1920s, based around themes of Australian folklore, especially bush ranging, loneliness and isolation, endurance, drought, floods, droving and shearing. These themes still endure.

Country music can be defined by 'simple chords, strong storyline, memorable chorus and country instruments' (Max Ellis). Simple harmonies allow the music to be easily played and remembered. Strong storylines tell a tale, whether of a pub with no beer, or a broken heart. A memorable chorus supports the storyline and also assists with easy recall. Country instruments, such as the guitar, banjo, fiddle and harmonica create the distinctive country music sound.

By the 1930s country music was an established part of rural life in Australia. This was due in part to the widespread popularity of radio, which was introduced in 1923. Country music from the USA, especially the Carter Family, a musical family from Virginia, and Jimmie Rodgers (1897 - 1933), a railroad worker from Mississippi who sang complex yodels with a distinctive voice, became well known. 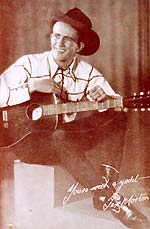 In the 1930s a recording artist had a great influence on the development of an Australian country music style. A New Zealand born singer and songwriter, Morton spent half of his lifetime in Australia and later sang his own songs about his experiences in Australia. His distinctive style influenced future country musicians and earned him the title of Father of Australian Country Music.

Buddy Williams (1918 - 1986), an orphan who was raised on a dairy farm near Dorrigo, was inspired by Tex Morton. From the age of 15, Williams busked with his guitar around the New South Wales (NSW) North Coast, Newcastle and Sydney. At the age of 21, Williams landed a recording contract with EMI in Sydney.

Australia 's first female solo country music recorded artist, Shirley Thoms (1925 - 1999), was only 16 when she recorded for the label Regal Zonophone. One of Thoms' most famous songs, Faithful Old Dog, emerged from her early recording sessions.

In 1952 a singer and performer called Smoky Dawson (1914-) began a radio show, called The Adventures of Smoky Dawson. This show stayed on air for ten years, and at its peak was broadcast on 69 stations across the country. Through this radio program and other TV appearances Smoky Dawson gained a reputation:

In the 1940s and 50s country music continued to grow in popularity, with performances in town halls, show grounds and talent quests.

One of Australia 's greatest country music stars, Slim Dusty (1946 - 2003), began to write the first of the 1000 songs he would complete during his lifetime. Slim Dusty was born David Kirkpatrick, in Kempsey, NSW. By the age of 10 he was already composing country music songs and identifying himself as a country music artist. Dusty is Australia 's most successful and prolific performer, with more Gold and Platinum albums than any other Australian artist on record.

In 1957 Dusty recorded and released a song that would become Australia 's first international number one hit - The Pub with No Beer. This song used verse written by the outback poet Dan Sheahan in 1943, set to music by Gordon Parsons:

Then the swaggie comes in smothered in dust and flies
He throws down his roll and rubs the sweat from his eyes
But when he is told, he says what's this I hear
I've trudged fifty flamin' miles to a pub with no beer

Other successful songs from this period included I've Been Everywhere (1959), by Geoff Mack and Little Boy Lost (1960) by Johnny Ashcroft, based on the true account of a 4 year old that went (temporarily) missing in Guyra, NSW.

The Slim Dusty Show joined the Buddy Williams Show, the Rick and Thel Show and others on the outback circuit. By 1964 Dusty had established an annual round Australia Slim Dusty tour - a 30,000-mile, ten-month journey.

Across Australia there was enough interest for other country music festivals to become established. The Boyup Brook Country Music Festival, in Western Australia (WA) in 1979 and the National Country Music Muster in Queensland (QLD) in 1982.

The National Country Music Muster is an annual event staged in the Amamoor Creek State Forest Park, QLD. The Muster, a non-profit community-based festival, also raises funds to assist charities Australia-wide. Since 1982 over AUS $10 million has been raised from the large crowds that visit each year.

The Tamworth festival has grown from strength to strength and is now recognised internationally as one of the 10 best music festivals in the world. In 2007, it was estimated that approximately 100,000 visitors came to Tamworth for the festival.

From the 1990s, Australian country music entered mainstream popularity, with artists such as James Blundell topping the pop charts. Blundell's duet with James Reyne Way Out West was one of the biggest selling singles of 1992. In 2003 Kasey Chambers was awarded an ARIA for the Best Female Artist, over competition such as the Australian pop star Kylie Minogue.

Another Australian who has achieved success with country music overseas is Sherrie Austin. At the age of 14 Austin was invited to open for Johnny Cash's 1985 Australian tour, two years later she moved to the States to pursue songwriting and performing.

Despite having its origins in the USA, country music in Australia has given a modern form of expression to experiences of life in the bush, which might have previously been recited in verse or sung as bush songs. In recent decades, country music has also consolidated its position as a popular and populist tradition, with the attendance of hundreds of thousands of fans at festivals throughout Australia and a large number of top-selling albums and songs.

References used in compiling this story include:

Search over 3,500 Australian websites for information about:

^ Go to Top
about this site  contact us  copyright  disclaimer  faq  help  link to us  privacy  sitemap  submit a website  Department of Communications, Information Technology and the Arts