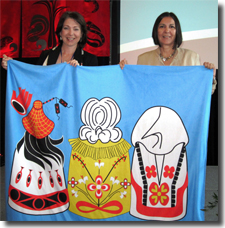 June 17, 2011 – Aboriginal Relations and Reconciliation Minister Mary Polak and Wendy Grant-John announce a new Minister's Advisory Council on Aboriginal Women that will provide advice to government through the Minister on how to improve the quality of life for Aboriginal women across British Columbia. Grant-John, a mother, grandmother, and former chief from the Musqueam Nation, will chair the new council.

END_OF_DOCUMENT_TOKEN_TO_BE_REPLACED

VANCOUVER - Aboriginal trades training in B.C. received a major boost after a significant funding and research announcement was made by Aboriginal Relations and Reconciliation Minister Mary Polak at an Industry Training Authority-sponsored National Aboriginal Day celebration at Klahowya Village in Stanley Park.

VICTORIA – Thirty-six First Nations aquaculture workers will now have the opportunity to receive training in shellfish technician, supervisory and management roles, providing them with the skills needed to access good jobs in their local communities to support their families.

VANCOUVER – More than 200 delegates representing the provinces, territories and First Nations, Métis and Inuit organizations gathered in downtown Vancouver from June 15 to 17 to attend the Collaboration to End Violence: National Aboriginal Women’s Forum.

VANCOUVER – Mary Polak, Minister of Aboriginal Relations and Reconciliation, announced a new Minister’s Advisory Council on Aboriginal Women that will provide advice to government and other organizations on how to improve the quality of life for Aboriginal women across British Columbia.