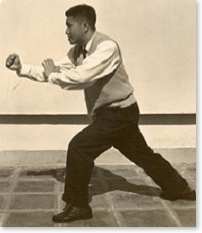 As Grandmaster Ip’s Disciple, I am dedicated to practicing, preserving and passing on the snake style of Yang family tai chi chuan. The snake style was held exclusively within the Yang family for five generations until Master Ip gave me permission to teach it openly.
The snake style develops a powerful, flexible body and superior martial arts skills. More importantly, it offers the potential of a lifestyle free of physical and emotional stress. Peace-of-mind, robust health and longevity are its ultimate rewards.
Please enjoy your visit to our web site. Perhaps one day you will want to follow the way of the snake.

Welcome to Ip Family Tai Chi Chuan - the Snake Style
Grandmaster Ip Tai Tak was taken as Master Yang’s male heir and adopted son (Disciple) in 1958. He was then taught the Yang Family’s Snake System and became Master Yang’s practice partner for the next 28 years

Master Ip was an innovator, adding exercises, drills and martial variations to the body of knowledge passed on to him by his Master. He researched many different martial systems and worked with his Master to develop a more complete system of Zhan Zhong. Master Yang also gave Master Ip permission to personalize the Yang Family Long Boxing and weapons forms to suit Master Ip’s martial interests and beliefs.


Before his death, Master Ip gave me permission to teach his Snake Style openly and encouraged me to pass on this teaching throughout the world. This has become my mission as his Disciple.

In honor of his legacy, and to distinguish this system from all other Yang teaching methodologies, I am proud to announce the formation of Ip Family Tai Chi Chuan (from the Snake Style of the Yang Family).