In 1950, a young Ip Tai Tak, while taking a break from swimming at a public pool, noticed people doing tai chi in a nearby park. Shortly thereafter, he became a devoted student of Tung Ying Kit, a Disciple of the famous Master Yang Chen Fu. 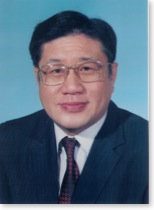 Four years later, now an assistant instructor for Master Tung, Master Ip went to a martial arts demonstration in the Wanchai district of Hong Kong. There he saw a demonstration of the broadsword by Yang Sau Chung, fourth generation head of the Yang family, who had recently immigrated to Hong Kong from Mainland China.
Ip Tai Tak was so overwhelmed by Master Yang's skill that he spent the next weeks of his life seeking out Master Yang in the New Territories of Hong Kong. He was accepted as Master Yang's student in 1954, and as First Disciple in 1958.
Master Yang died in 1985. Master Ip was consumed by his tai chi practice. He remained a student and researcher of his art for the rest of his life. Only after retiring from government service in Hong Kong did he accept a handful of students into his home for instruction. Although he kept a low profile in Hong Kong, his masterful push hands skills became legendary.
He formerly accepted two Disciples to pass on his transmission. John Ding, of London, England; and Robert Boyd, of South Hero, Vermont, USA.
Master Ip passed away on April 25, 2004.

Meet Mabel Ip
Master Ip's daughter, Mabel, teaches Tai Chi and English privately at her home in Hong Kong.
Mabel was a veteran television producer with the Canadian Broadcasting Corporation (CBC-TV). She worked and resided in Calgary, Canada for twenty years. In 1996, Mabel accepted a job offer and returned to her home town (Hong Kong) for the launch of NBC Asia. She also worked at Star-TV, Hong Kong Headquarters.

Mabel grew up watching her father practice Tai Chi and had visited Master Yang Sau Chung's home to witness her father's hard training with Master Yang. Mabel studied with her father during the last years of his life. She serves as a cross-cultural advisor and translator for the Bao Tak Fai Tai Chi Institute.
You can contact Mabel at: iptv@netvigator.com.