Executive Director Robert Boyd
Bob began his martial arts training at the age of 18 - signing up for karate lessons at the first martial arts school to open in Vermont in March of 1968.

Bob went on to study Okinawan Uechi-Ryu Karate for the next 15 years. In 1973 he visited Okinawa and trained with Master Uechi and other Okinawan masters. After two months of intensive training, Bob was promoted to third degree black belt and came back to Vermont to open his first school in Essex Junction, Vermont. 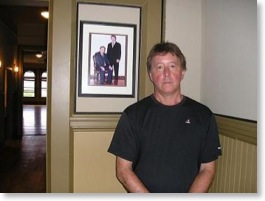 In 1974, Bob was invited to participate in a series of seminars for teachers of the Uechi Karate system. At the first of these seminars, he met John Conroy of Providence, Rhode Island. John would be Bob's mentor for the next 25 years.

John Conroy taught karate in the Providence area, but also began studying Tai Chi with Master Chu Gin Soon, the second Disciple of Yang Sau Chung of Hong Kong. Master Chu came to Boston in 1969 to teach authentic Yang Family Tai Chi. John became Master Chu's first non-Chinese student, and went on to become his first Disciple in 1988.
In 1983, John began teaching Bob as a private 'indoor' student. One year later, he encouraged Bob to teach Tai Chi one night a week at his Karate school in Vermont. By 1985, Bob had retired from Karate and was teaching Tai Chi at the Burlington Tai Chi Club.

John Conroy brought Bob to Hong Kong in 1999 and introduced him to Master Ip Tai Tak. Bob became a Disciple of Master Ip in March of 2001. It is a testament to the character of John Conroy that he urged his longtime friend and student to become a Disciple and follow Master Ip's teaching.

Local Class Schedule
Tai Chi is an ancient Chinese martial art that uses slow rthythmic movement to simulate and cultivate the body's natural energy. By moving from posture to posture in a continuous flow, muscles are stretched, the spine is flexed, joints are loosened, connective tissue is massaged and the blood is oxygenated.
Tai Chi is also a sophisticated self-defense system that uses subentry and sensitivity to neutralize and control brute force.

Tai Chi offers good health, peace of mind and renewed vigor. For the serious student, it can become the driving force behind personal health, physical fitness (including self-defense skills), and success in living a full and fruitful life. The Bao Tak Fai Tai Chi Institute offers expert instruction to match the interest of the practitioner from beginner to instructor level.

Beginning and intermediate classes are held on Saturday mornings and Wednesday evenings. Best viewing times are from 11am to noon on Saturday or 7pm to 8pm on Wednesday.