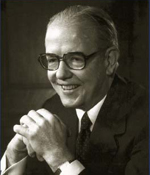 Ruebhausen was a distinguished partner of the law firm of Debevoise & Plimpton LLP for almost fifty years, and served as its presiding partner between 1972 and 1981. He served as president of the Bar Association of the City of New York, a key adviser to Nelson Rockefeller, general counsel to the Office of Scientific Research and Development during World War II, and chairman of the boards of the Russell Sage and Greenwall Foundations. In 1978, he was awarded the Law School's Citation of Merit. He passed away in 2004, fourteen years after the death of his wife Zelia, a 1937 graduate of Vassar College who served on the boards of the League of Women Voters, the International House of New York City, and the African American Institute. From 1972 to 1977, she was a member of the twelve-member commission charged with revising the Charter of New York City.

"Yale Law School could not survive without the generosity of its alumni, few of whom were more dedicated to their alma mater than Oscar M. Ruebhausen," said Yale Law School Dean Harold Hongju Koh. "He was the type of lawyer that our students and graduates hope to become. He was a social architect deeply committed to the very best values of the law and the legal profession."

"Through this generous gift," added Dean Koh, "the Ruebhausens sought to enhance the intellectual vitality, creativity, and analytic rigor of Yale Law School, while emphasizing the role of the legal profession as an advocate for the public interest. This gift will enable us to continue this proud tradition at Yale Law School, and at the same time help us support the School's close intellectual and social interactions between faculty, students, and visiting fellows."