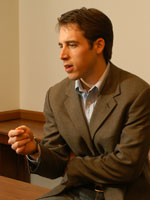 He worked on that paper with Professor Akhil Amar, author of America's Constitution: A Biography and an expert on the topic. And Hawley says that his engagement with Amar was both substantive and exciting. "Professor Amar was writing on the Twelfth Amendment at the time that I wrote this paper and has given a great deal of thought, of course, to the Constitution as a whole. So he has some very definite ideas, and my paper in some ways tried to take on a few of his ideas and a few of his contentions, and say, 'Maybe that's not the best way to interpret this.'"

In his final term, Hawley was working on his Supervised Analytic Writing paper, in which he hoped to compare church-state relations in the U.S. and England.

While he has retained his focus on constitutional law, Hawley says he also developed interests in other areas, such as legal history, land use, procedure, and statutory interpretation. After graduation, he planned to clerk for Judge Michael W. McConnell on the Court of Appeals for the Tenth Circuit. Hawley says that he expects all of what he learned in law school to help him on the Tenth Circuit. "A lot of what I've learned in constitutional law classes and elsewhere will be very relevant.... Statutory interpretation is really the bulk of what courts do, and the Tenth Circuit tends to see a lot of land use issues."

Outside the classroom, Hawley served as President of the Yale chapter of the Federalist Society and as an Articles Editor for the Yale Law Journal. He was also publishing a book about the social and political thought of Theodore Roosevelt. Hawley said he tried to get to as many of the events and talks organized by his fellow students as he could. "It's a constant feast," he says. "There's too much to take in. There's just not enough time to go to everything."

Hawley adds that a part of the feast was engaging with his classmates, so many of whom not only attended their classes but had a variety of interests and commitments that they acted on. Hawley says, "We have a great faculty and I have learned enormously from them. But, as no slight to the faculty, I really think I have learned as much or more from my fellow students. That's an experience I don't think you can get anywhere else, and that I wouldn't trade for the world."