In Quebec, coops and non-profits account for 8-10 percent of GDP 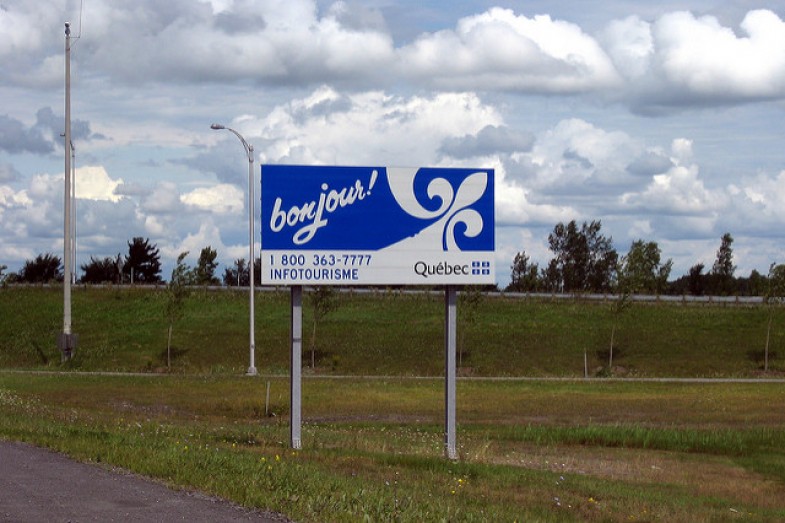 (By Wally Gobetz under a Creative Commons license)

“We always say the social economy is simply the formalization of the commons,” explains Nancy Neamtan, co-founder of a large network of social economy organizations.

Welcome to everyday life in Quebec—Canada’s 2nd largest province with 8.2 million people. Yet these scenes of economic activity are different in a notable way from similar ones occurring throughout North America.

Each enterprise involves a cooperative or non-profit organization—which together make up 8-10 percent of the province’s GDP.  More than 7000 of these “social economy” enterprises ring up $17 billion in annual sales and hold $40 billion in assets (Canadian dollars).  They account for about 215,000 jobs across Quebec.

“We always say the social economy is simply the formalization of the commons. It’s social ownership, the goal of which is a sustainable, democratic economy with a market—instead of a market economy,” explains Nancy Neamtan, co-founder of Chantier de l’Economie Sociale, a network of social economy organizations whose anniversary banquet is described above. “Our mission is building a broader vision of what the economy actually is.”

“When Chantier started out, a lot of people said it wouldn’t work. We had unions, women’s organizations, green groups, and many thought it was too diverse,” Neamtan says. “But it does work.” Evidence for her assertion is visible all around—Chantier’s office is tucked into a six story building that takes up most of a city block, all of which is filled with social economy organizations.

Not all of these social businesses are new—some of the credit unions, cooperatives and union pension funds go back a hundred years. “But they were largely invisible to many people until the name social economy became popular,” Neamtan adds.

Quebec’s social economy ranges from a video game creator’s cooperative to a social integration program for Haitian immigrants to a coop grocery in a remote town on the Gaspe peninsula to a network of 8000 home healthcare workers, half of whom were on welfare before being trained for the field.  Here are more examples showing the range of these enterprises:

Desjardins Group: The banker honored for his work at Chantier’s banquet was former president of the Desjardins credit union, founded in 1900 and today the province’s largest financial institution.

The Nitaskinam Cooperative: Also on hand at the banquet was Nitaskinam, an Inuit-run cooperative which designs clothing inspired by art of the Atikamekw people, which has doubled from three to six members in its first year. “The social economy is our traditional economic model and fits with our values,” explains co-founder Karine Awashish, who is also an economic development official of this tribal nation. “I see good opportunities for us to create new social economy jobs in forestry, health services, tourism, arts festivals and youth projects.”

UTILE Student Housing Cooperative: One of the youngest entrepreneurs at the banquet, Laurent Levesque, helped launch a student housing development organization with other activists involved in the headline-grabbing 2012 Quebec Student Strike, collaborating with Chantier de l’économie Trust.  “Students pay 70-80 percent more in rent on average,” he explained, “which creates an inflationary spiral” that hurts not just them, but their low-income neighbors.  With start-up capital from the Concordia Student Union and further funding from social economy partners like Desjardins and the province of Quebec, UTILE is set to break ground on apartments for 160 students.

Technopole Angus: It’s no coincidence that that the Desjardins credit union has a branch in the new Technopole Angus sustainable urban village, which brings opportunities to a working class neighborhood that was rocked when the Canadian Pacific Railway shuttered its machine shops in 1992.  A number of historic brick structures were repurposed, and new eco-friendly buildings constructed, with more planned for the project’s phase II.  The community will eventually include 500 affordable housing units, 450,000 square-feet of office space, 20 local shops, four public squares, a bike-pedestrian main street and a one-acre urban farm growing organic produce.

Recylage Vanier: A non-profit organization started 30 years ago by two out-of-work men who realized the recycling industry could benefit the disadvantaged as well as the earth, Recylage Vanier offers training for people struggling to find work because of low job skills, recent immigration, substance abuse, mental illness, disability, or other challenges.  Jobseekers arrive here for a 24-week program that emphasizes work readiness and life skills as well as on-the-job experience.  Most are long-term unemployed, who have been sent by the Quebec employment bureau and social service groups.

“They have to get along with a boss, get along with colleagues, master simple tasks and then take on new ones with more responsibility, all the way up to driving a forklift,” says Nicolas Reeves, one of Vanier’s managers.  For the final four weeks, they split their time between the recycling plant and job hunting with the help of staff counselors. About 85 percent of graduates find work, and 10 percent seek further education, according to Reeves. Recylage Vanier faces stiff competition from two private companies in the field, so clients who value the organization’s mission are important to their success—including the province of Quebec, which provides about half their business.

Cinema Beaubien: This is non-profit neighborhood moviehouse explicitly proclaims its mission to “defend the primacy of persons and labor over capital in the distribution of its surpluses and incomes.”  The cinema’s importance as a community gathering spot can be witnessed in the long lines at the ticket booth, where patrons merrily chat with one another rather than staring at their phones. Taxis wait across the streets to whisk moviegoers to their next destination, about half of which are from the Taxi Coop Montreal.  (In Quebec City, all taxi drivers belong to a cooperative.)

La Barberie Cooperative Microbrewery: Operating as a worker cooperative for the past 20 years explains the success of this brewery and brewpub, says general manager Jean-Francois Genest, who joined La Barberie three years ago after running his family’s bookstore and later converting another bookstore into a cooperative. “The coop is a good plan to keep a place going. Sharing the profits means you attract the best workers. For our part, we try to make their jobs as interesting as possible, offer more holidays and higher pay.” Emilie DuMais, who’s tended bar here for eight years, notes, “You have much more ambition working for yourself than working for someone else.”

Le Monastere des Augustines: A convent dating back to 1700s in the heart of Quebec City’s walled city has just opened as an elegantly renovated hotel, spa, museum and conference center. It is organized as a non-profit in accordance with the social mission of nuns still living there to promote holistic health and spiritual renewal. Besides tourists, spa patrons and participants in corporate meetings, guests also include activist groups holding retreats and health care workers seeking a reprieve from the stress of their jobs.

RISQ: In 1997 Chantier created RISQ (Reseau d’Investissement Social du Quebec), which has invested $25 million in technical aid and capital for social economy businesses, resulting in: 1786 new jobs, 5,119 jobs maintained and job training for 1527 marginalized workers across Quebec, according to their calculations.  RISQ financial analyst Nathalie Villemure, who worked for many years in private banking, notes that they see fewer defaults than commercial lenders. “These people have a cause bigger than themselves, so they work harder and we help them find solutions.”

Fiducie: In 2007 Chantier launched Fiducie, a $50 million “patient capital” (or slow money) fund that provides long term, non-guaranteed loans of $50,000-1.5 million to promising cooperatives and non-profits with less than 200 employees. “We don’t expect to see anything in repayment for 15 years,” says General Manager Jacques Charest. Thirty million of the investment came from union pension funds with the rest from the federal and provincial governments.

What We Can Learn from Quebec’s Social Economy

While Quebec possesses a distinct culture and history, the emergence of a strong social economy across the province provides practical lessons for other places.

•Recognize the Social Economy When You See It

Cooperatives and non-profit initiatives already exist throughout the US and most other countries, so the first step is seeing, naming and claiming the social economy as part of the commons we all share.

Neamtan points out that the American tradition of community organizing was a big influence on their early work, especially community development corporations (CDCs) that arose to tackle problems of disinvestment in urban neighborhoods. The Dudley Street Initiative, which transformed a low-income community in the Roxbury district of Boston, was a particular inspiration for her. The proliferation of cooperatives in the Basque and Catalonian regions of Spain provided another model for bottom-up economic development.

Social economy initiatives benefit from the longstanding sense of solidarity in Quebec, where French speakers were discriminated against and their local economy dominated by English-speaking Canadians, Americans and English.  A analogous situation can be found among racial and social minorities, and in rural and deindustrialized regions where economic power is wielded from outside.

•Tap the Power of Government

Government agencies have been a partners and funders in many projects through the years. Social economy initiatives often arose even when conservative politicians were slashing government programs to provide a more humane alternative to strictly market-oriented development. Legislation passed by the left-center Parti Quebecois in 1997 gave the social economy movement a big boost by offering local governments more leeway in supporting community and cooperative efforts to create jobs and promote entrepreneurship.

“The labor movement boosted the social economy by making the choice in the 1980s not to just negotiate contracts but to create jobs and support civic enterprises,” explains Neamtan, which led to the creation of the landmark Quebec Solidarity Fund, an $11-billion-dollar pension fund, of which 65 percent is invested in small- and medium-sized Quebec-owned businesses.

Historically, the Catholic church controlled many aspects of life in the province, and priests enthusiastically promoted cooperatives and non-profit institutions as models of the church’s social teaching. By the end of the 20th century when the church’s influence waned in the face of increasing secularization, social economy organizations found numerous opportunities to set up shop in closed churches and convents.  The church remains an ally, Neamtan notes, “especially now that Pope Francis talks all the time about the Solidarity Economy.” 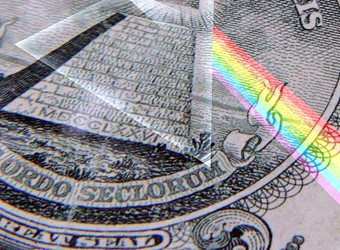 Enlarging Our Sense of "the Economy" 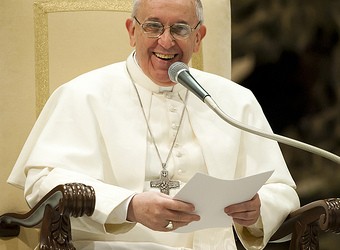 By the Catholic Church of England and Wales under a CC license.

“Every person ought to have the awareness that purchasing is always a moral--and not simply an economic--act.” 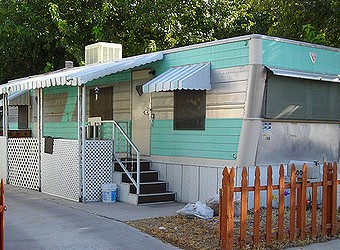 (Photo by Roadside Pictures under a Creative Commons license.)

What a Wealthy Heir Learned from Mobile Home residents

A remarkable lesson in social solidarity