350.org's Fossil Free campaign can help us re-establish our connection to community and the commons 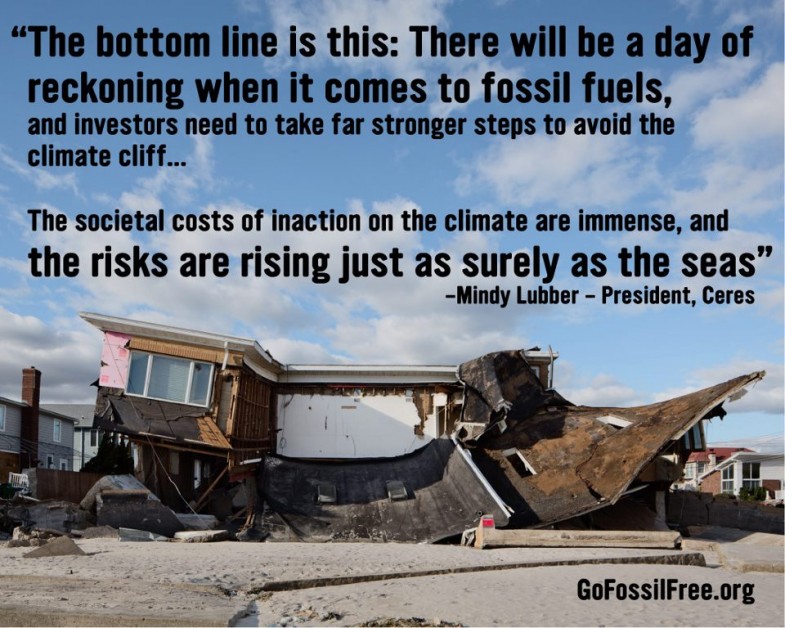 Through 350.org’s Fossil Free campaign, many students across the country are discovering that their tuition not only secures them a seat in class, but also supports an industry that is destroying the health of our planet—the fossil fuel industry. These students are morally outraged, and they are fueling a divestiture movement that is “spreading like wildfire,” according to InsideClimage News. Like so many of us, they believe that divestment can help us regain control of our assets and re-establish a lost sense of belonging within our communities.

Divestment is one key strategy for advancing the commons movement by helping people and communities gain some power in determining where their money goes and what impact it has on the world, as well as protecting one of the most critical commons: our atmosphere.

Our investments carry real power to either distance us from choices that can affect our lives in profound ways, or help us develop more meaningful connections to our community.

Surely the Fossil Free activists would agree: Where we invest our money matters more now than ever.

There’s a national movement underway, and it’s gaining momentum. Inspired in part by Bill McKibben’s Rolling Stone article and coordinated by the global grassroots organization 350.org, the Fossil Free campaign aims to convince “educational and religious institutions, city and state governments, and other institutions that serve the public good” to divest from fossil fuels. If it’s wrong to wreck the climate, the campaign argues, then it’s wrong to profit from that wreckage.

Phase one of the campaign began in November 2012, and now hundreds of college students from campuses across the country are demanding that their universities sell off endowment holdings in large fossil fuel companies—specifically these 200 energy companies, which hold the vast majority of the world’s proven coal, oil, and gas reserves.

“I have been frustrated by fragmentation and insularity within the environmental movement,” Chloe Maxmin wrote in a recent blog post for The Nation. “Now as a student leader of Divest Harvard, I have seen how divestment is engaging more students than any similar campaign in the past twenty years.”

350.org Founder Bill McKibben says phase two of the Fossil Free campaign is also making progress. In a recent public statement he announced that the City of Seattle plans to divest its pension-fund holdings—which, according to InsideClimate News, are largely invested in ExxonMobil and Chevron—and six conferences of the United Church of Christ “have joined to urge the national denomination to do the right thing.”

Organizing to stop the development of fossil fuel infrastructure such as tar sands pipelines, hydrofracking wells, and coal plants is necessary, but we can’t stop there. “We need to loosen the grip that coal, oil and gas companies have on our government and financial markets,” says Fossil Free, “so that we have a chance of living on a planet that looks something like the one we live on now.”

The leaders of the Fossil Free campaign are thinking long term. 350.org has done the math, now it’s time to take a closer look at our portfolios.

Curious to learn more about the Fossil Free campaign? You can find more information about divestment here, and don’t miss these resources from around the web: