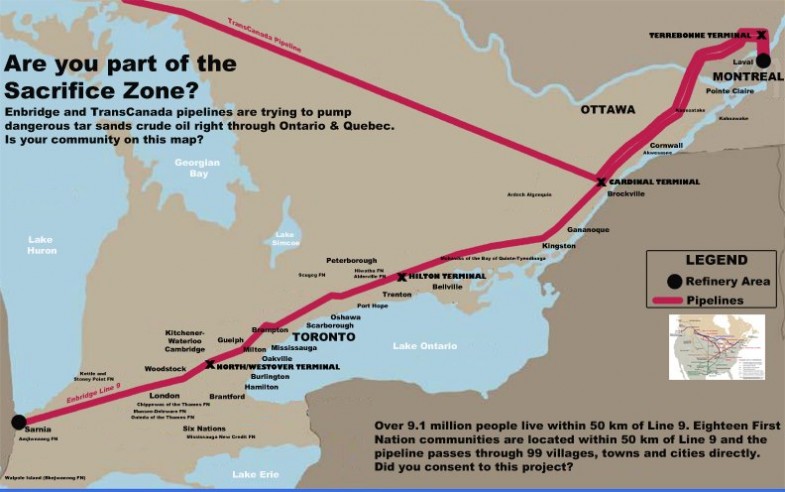 Tar sands oil, which is currently being transported east across the country, may become a bigger threat to our Great Lakes in the near future.

In the 2008 report How the Oil Sands Got to the Great Lakes Basin: Pipelines, Refineries and Emissions to Air and Water, journalist David Israelson reveals the network of pipelines and refinery expansions that would increase the amount of tar sands bitumen shipped to and processed in the Great Lakes Basin. The report flags that “as many as 17 major refinery expansions are now either being considered, planned, applied for, approved or developed in and around the Great Lakes.” Israelson warns, “This expansion promises to bring with it an exponential increase in pollution—discharges into waterways including the Great Lakes, destruction of wetlands, toxic air emissions, acid rain, and huge increases in greenhouse gas emissions.”

BP’s Whiting refinery on Lake Michigan has been one of the most controversial and notorious expansions. The $3.8 billion expansion—to be completed in 2013 —would increase tar sands processing from 30 per cent of feedstock to 80 or 90 per cent.

A recent decision by the National Energy Board permitted Enbridge to reverse the flow of Line 9—a pipeline that runs from Sarnia to Westover, Ontario—which would allow Enbridge to transport tar sands oil from Alberta to the Great Lakes. Enbridge has noted that it would maintain the flow at 152,000 barrels of bitumen per day, but that capacity could eventually expand to 250,000 barrels per day.

Suncor is currently processing 85,000 barrels per day of tar sands bitumen into gasoline, kerosene, and jet and diesel fuels at its Sarnia refinery. This and other refineries pose serious environmental risks to residents of Sarnia, the Aamjiwnaang First Nation and other communities around the Great Lakes, and it may only get worse.

For more than two years now, there have been discussions among local, provincial and national politicians about redirecting tar sands crude to Sarnia for processing. The SarniaLambton Economic Partnership released a lengthy brochure to attract refining companies that included promotions of local amenities, business opportunities and details about the services existing companies provide.

There are 62 oil, gas or chemical facilities within a 25-kilometre radius of the Aamjiwnaang First Nations community, who live on the shores of the St. Clair River south of Sarnia. The water and air pollution from these facilities are having shocking effects on the community. Twice as many girl babies as boy babies are being born in the Aamjiwnaang community. Canadian wildlife experts have also noted that frogs and other aquatic species are displaying unusual sexual attributes.

Ecojustice has launched a legal challenge, arguing that the Ontario Ministry of the Environment’s ongoing approval of pollution violates two community members’ “basic human rights under sections 7 and 15 of the Canadian Charter of Rights and Freedoms—their rights to life, liberty and security of the person, and the right to equality.”

During the Council of Canadians’ Great Lakes Need Great Friends tour, which took place in May, National Chairperson Maude Barlow, Regional Organizer Mark Calzavara, London chapter activists Gary Brown and Don McLeod and I spent the afternoon visiting a part of Sarnia that the typical tourist doesn’t see. Ron Plain, an activist from the Aamjiwnaang First Nation, led the five of us on a “toxic tour” of Sarnia. The massive growth of the petrochemical industry has led the area to be dubbed “Chemical Valley.”

The Suncor facilities are the backdrop to the community’s graveyard, where family members and friends are buried, many of whom who have died of cancer. An area ironically called “seniors’ island” highlights the strikingly low number of seniors in the community. Because the government has failed to properly warn about the danger of toxins, we saw signs posted by community members warning: “Keep Out! Talfourd Creek contains toxic substances known to cause serious health risks.”

Everyone has the right to the waters of the Great Lakes as well as a responsibility to protect them. We need to stop tar sands oil from coming east and further polluting the Great Lakes, one of the world’s most precious resources.

Emma Lui is a Water Campaigner for the “Council of Canadians”:http://www.canadians.org/.