Twelve Commons Dispatches for These Times

Drawing from our work with the commons, we offer the following ideas and observations that we believe can help us constructively and creatively make the most out of this movement moment 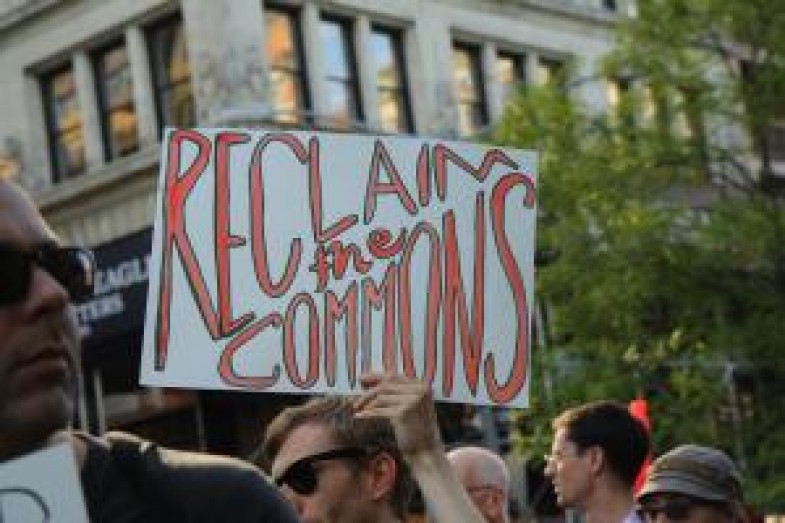 1. The commons and the creation of a commons-based society is a radical yet practical and necessary proposition for our times.

2. Commons exist all around us. We can learn from them. People everywhere for centuries have created both formal and informal systems to use shared resource and make collaborative decisions. Commons come in many forms—from communal fishing arrangements to libraries, and from the rules governing waterways to the partnerships that define open source software, cooperatives, musical sampling and community gardens. While some of these forms are new, they have their roots in long standing indigenous traditions and survival strategies.

4. Commons are central to the life and vitality of a community, offering a system of meaning and value that is not simply transactional or narrowly based on the market. Resources in a commons are part of the totality of a community—its economic survival, its history, its ecological health, its beauty, its identity, its resilience, the relationships among its people, its life blood.

5. The commons expresses an understanding that communities have a fundamental and equitable claim to our common inheritance of natural and created abundance, and play a critical role in the stewardship of those resources. A commons is what we share and how we share it.

6. The commons, then, begins with a claim. This claim is a collective one made by a community on the natural or social resources that are shared and belong to them all. It is a claim for equitable benefit whose history stretches back in time. Communal resource arrangements have always existed in indigenous communities around the planet. In Europe, peasants asserted hunting and gathering rights that predated the legal authority of kings and landowners and were recognized in social charters. This is a radical and liberating history.

7. The commons carry responsibility. The community entrusted with those resources must ensure their equitable and just use as well as their preservation for the future. Equity and stewardship are intertwined at the center of a commons with community members acting as the protectors, co-creators and beneficiaries.

8. The commons—as both an idea and practical arrangement—reminds us of the vital difference between petitioning for access and benefit or having real authority in regard to the use and stewardship of commons resources. Commons governance draws its legitimacy from a direct relationship between commoners and a commons resource, and a decision making structure that gives standing and power to the communities most directly affected.

10. We have all lived the commons in some manner, even if that word was never used. While the term “commons” comes from European history and the specific struggles of commoners to claim their rights, other cultures have similar and often more enduring traditions of communal ownership, interdependence. resource sharing and stewardship. Across these traditions and in our own memories there is great wisdom and practical experience to draw on as we forge the modern day commons.

11. The idea and language of the commons has been misused. Powerful colonizers and corporations and colonizers have used the language of the commons (as well as common good, common heritage, public interest and so on) to justify the appropriation of resources and dislocation of communities, particularly indigenous people. Resistance to this kind of co-optation and abuse is critical. We must actively work to link commons work to the struggles for equity, racial justice and human dignity.

12. We need a commons revival. Fostering, supporting and animating any kind of commons begins by asking a different set of questions that engage a broader set of people’s experiences and help a community break out of constrained thinking. The goal is to equip communities with the ability to participate in and manage the communities in which they live. This in turn depends on people being able to see and claim resources in new or renewed ways. Because so much works against this possibility in our present society, we must pursue intentional strategies to animate and bolster commons work.