Posted by: News Apr 4, 2015 in Indie Results Leave a comment

Fish Tank with ROH TV Champion Jay Lethal and ROH World Champion Jay Briscoe that turned into a brawl. KRD ran out and attacked. Sydal, Daniels and ACH made the save.

Adam Page def ACH
– match happened after Page cut a promo on ACH & trying to burn an ACH shirt
– post match Whitmer and Page beat down on ACH until Sydal makes the save.
– Whitmer stared down at Corino

War Machine vs Killer Elite Squad went to a no contest 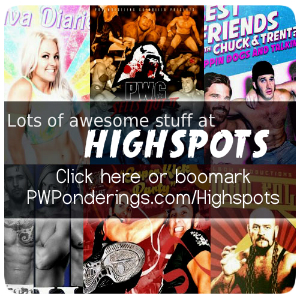 Copy this link to your Bookmarks/Favorites: http://PWPonderings.com/Highspots

Scroll To Top
'use strict';