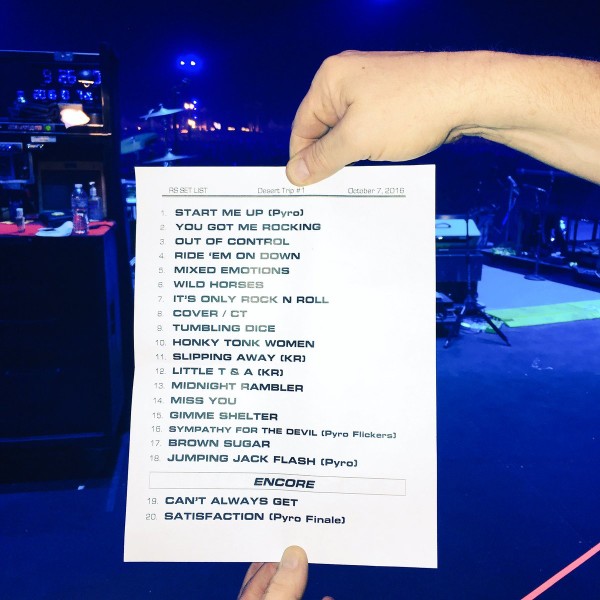 Last night the Rolling Stones played the Desert Trip festival, in Indio, California. With a unique line-up, the band play alongside their contemporaries, Bob Dylan, Paul McCartney, Neil Young, the Who and Roger Waters.

Following Bob Dylan’s opening set, the Rolling Stones treated fans to a twenty song set featuring some surprises. For the first time ever, the Stones covered the Beatles’ track ‘Come Together’.

After announcing their new album, Blue And Lonesome, on Thursday, the band played ‘Ride ‘Em On Down’, originally written and recorded in 1955 by Eddie Taylor.

Another surprise for fans, was the re-introduction of ‘Mixed Emotions’ to the setlist, which has not been played live by the Stones since 1990.

The Rolling Stones return to Desert Trip next Friday, October 14. From there, they will head to Vegas for two shows at the T Mobile Arena.

You Got Me Rocking

Ride ‘Em On Down (from the new album Blue & Lonesome)

Sympathy For The Devil

You Can’t Always Get What You Want

(I Can’t Get No) Satisfaction

New In The Store

Buy from:
US Rest of World

The Rolling Stones on iTunes
Just a click away…