I continue to be the Chief GNUisance of the GNU Project.
This is my long-term commitment and I plan to continue.
Support me against a campaign of hatred

Send comments/questions about the search engine to: rms at gnu dot org

RSS site feed for the most recent political notes and new material.

This is the personal web site of Richard Stallman.
The views expressed here are my personal views, not those of the Free Software Foundation or the GNU Project.
For the sake of separation, this site has always been hosted elsewhere and managed separately.

If you want to send me GPG-encrypted mail, do not trust key servers! Some of them have phony keys under my name and email address, made by someone else as a trick. See gpg.html for my real key.

Canadians: I suggest you seek election advice at a local chapter of a group that pushes to curb global heating and has the courage to say, "Canada should stop exporting fossil fuel." It will at least use the right goals to suggest who to vote for in your area.

This page is made by scraping Fridays for Future so you can get the information without running any Javascript code. I would be very glad if they made the information on their own site accessible from the Free World; then we could simply refer people to their site and do without the scraping etc.

I am looking for a few more volunteers to help install new political notes on the site. If you'd like to help me in this way, please write to rms at gnu period org.

Is your bank pressuring you to use biometric ID? If so, please write to rms at gnu dot org. It could be useful if you document what is happening.

Please join the Free Software Foundation to support its work for your freedom.

"They" is plural — for singular antecedents, use singular gender-neutral pronouns.

The largest part of the site is the political notes, and they are typically updated every day. 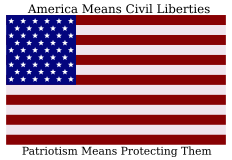 graphic by Susan Henson
Americans, you may wish to copy this icon to your own page, as a way of showing what patriotism means to you.

Listen to the recording of Guantanamero, a protest song written in Spanish. The recording is in Ogg Vorbis format. To install an Ogg Vorbis player, see the FSF's Ogg Players page.

There Ought to Be a Law

More items where there ought to be a law.

(You may need to scroll down for more text if there is blank space in this column.) 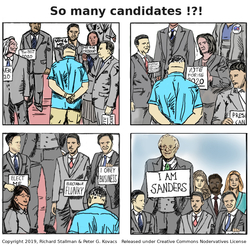 Copy this button (courtesy of R.Siddharth) to express your rejection of Facebook.


Why everyone has a reason to fear massive surveillance

Facebook's face recognition demonstrates a threat to everyone's privacy. I therefore ask people not to put photos of me on Facebook; you can do likewise.

Of course, Facebook is bad for many other reasons as well.


Countries to Stay Away From

I'd like to make a list of countries that do not require a national identity card, and have no plans to adopt one. If you live in or have confirmed knowledge of such a country, please send email to rms at gnu.org.

India has mostly finished imposing a national biometric ID number in a grand act of oppression.

Switzerland has national ID cards which are optional, but they or some other government ID card are needed for some purposes.

Iceland doesn't have ID cards as such, but they have ID numbers that citizens are forced to use frequently. For example, the national ID number is often required to rent a video or use a gym.

Denmark issues non-photo ID cards with a "person number", and many services use this card to identify people.

Wikipedia has a list of identity card policies by country.

Stay away from certain countries because of their bad immigration policies.

Avoid flight connections in these airports because of their treatment of passengers.

People often ask how I manage to continue devoting myself to progressive activism (such as the free software movement) for years without burning out. The best way I can answer is by recommending a book, The Lifelong Activist by Hillary Rettig.

I disagree with the book on one theoretical point in the last part of the book: we shouldn't think of political activism as being marketing and sales, because those terms refer to business, and politics is something much more important than mere business. However, this doesn't diminish the value of the book's practical advice about borrowing techniques from marketing and sales.

Disclosure: I am friends with the author.

I have reposted some of Rick Falkvinge's articles. As posted on his site, you can't see them in a browser without running some nonfree Javascript code which is apparently non-free. These versions show the same text, without the obstacle.

These are my political articles that are not related to the GNU operating system or free software. For GNU-related articles, see the GNU philosophy directory. You can also order copies of my book, Free Software, Free Society, 3rd edition', signed or not signed.

"Those who profess to favor freedom, yet depreciate agitation, are men who want crops without plowing up the ground. They want rain without thunder and lightning. They want the ocean without the awful roar of its many waters. This struggle may be a moral one; or it may be a physical one; or it may be both moral and physical; but it must be a struggle. Power concedes nothing without a demand. It never did and it never will."
Frederick Douglass, American Abolitionist, Letter to an associate, 1849

Here are notes about various issues I care about, usually with links to more information. The current notes are here. For all previous notes, see this page.


See this page for information on efforts to maintain links in the political notes.

Political notes about the 2001 G8 summit in Genoa, Italy are being archived on their own page.

Richard Stallman's bio and publicity photos, and other things of interest to the press, have been moved to a separate page.

Photos about my travels

A song parody, Colors of the Lisp, by Jefferson Carpenter.

Earth under attack from planet Koch.

On doxing, and how to spell it.

Here I am wearing my "power tie".

Wine snobs get their comeuppance.

Here I am struggling to open a bottle of water.

My application to an join Marian Henley's ex-boyfriends list.

My funny poetry and song parodies.

My Puns in Portuguese

--Saint IGNUcius-- The Church of Emacs will soon be officially listed by at least one person as his religion for census purposes.

Stallman Does Dallas: "I have to warn you that Texans have been known to have an adverse reaction to my personality…"

I found a funny song about the Mickey Mouse Copyright Act (officially the Sonny Bono Copyright Act) which extended copyright retroactively by 20 years on works made as early as the 1920s.

If you are a geek and read Spanish, you will love Raulito el Friki, who said "Hello, world!" immediately after he was born. Here's an archive of this now-defunct comic strip.

Sleeping with Stallman at MIT.

The huns and the writs.

Made for You (December 2012) (local copy) Esperanto translation

The Right to Read

My book of essays about the philosophy of Software Freedom, is available from the GNU Press.

Am I Doctor Stallman?

My radio program of Music from Georgia, originally broadcast on WUOG in Athens, Georgia on Oct 13, 2014.

A proposal for gender neutrality in Spanish, suitable for both speech and writing.

Origin of the POSIX name.

On Hacking: In June 2000, while visiting Korea, I did a fun hack that clearly illustrates the original and true meaning of the word "hacker".

Predicting the attack on Pearl Harbor

Please send comments on these web pages to rms at gnu period org.