Cecil has published several compilations of columns. If the sustained IV drip of weekly columns doesn't do enough to satisfy your need for knowledge, belly up to the intellectual overdose of these babies.

We should like to emphasize up front that there are THREE books out, not two as many erroneously believe. We tell you this in case you want to jump up from the keyboard and get the third without further delay.

OK, back to business. At some point, as a service to our readers, we hope to be able to allow the Teeming Millions to buy Straight Dope books, Straight Dope coffee mugs, and other exciting Straight Dope merchandise on the web. Alas, this glorious day has not yet arrived. Right now you have to go down to the bookstore and buy our stuff in person or order it on-line through America Online. If you've been waffling about firing up that dusty AOL trial disk, the ability to send money directly to us from the comfort from your own home, along with all the other Straight Dope features on America Online, should tip the balance. We hope you do it because otherwise we're not going to make a dime, and we NEED those dimes to continue our holy work.

Also, let's face it, there's a lot in it for you. In this uncertain world Straight Dope books offer the one guaranteed route to coolness. You're sitting on the bus, you're looking around, and you're thinking: these people think they're hip. But I know the real lyrics to "Louie Louie." Not to mention the secrets of Mr. Gerbil. And you will smile a little smile.

Besides, you'll never have to worry about holiday gifts again. It is getting to be that time of year, you know. Many of our fellow citizens will be so frazzled. Not you. You will go to the bookstore and say, "Yo! Gimme a dozen of those Straight Dope books, and make it snappy!" And the bookstore clerk will look at you. And you will both smile little smiles. 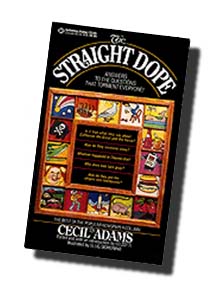 The Straight Dope, by Cecil Adams. Edited and with an introduction by Ed Zotti. Illustrated by Slug Signorino. Published by Chicago Review Press 1984. 301 pages plus index. ISBN 0-914091-54-9

Does the Vatican really have the world's largest pornography collection? What are the nine Eskimo words for snow? Why do men have nipples? What does the 'H' stand for in Jesus H. Christ? Why do pigeons bob their heads? Why does lint collect in your navel? If all one billion Chinese got up on chairs and jumped off at the same time, would the earth be thrown out of its orbit? 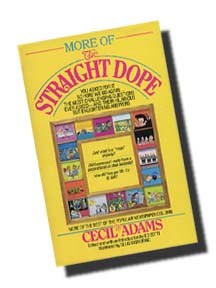 More of the Straight Dope, by Cecil Adams. Edited and with an introduction by Ed Zotti. Illustrated by Slug Signorino. Published by Ballantine Books 1988. 482 pages plus index. ISBN 0-345-35145-2

How did they get Mr. Ed to talk? Did brontosauri really have a second brain in their behinds? What is a mojo, anyway? Is it true Thanksgiving was invented by the editor of Harper's Bazaar? Why do your fingers and toes wrinkle in the bathtub? Is it true turkeys are so dumb they will look up at the sky when it rains and drown? 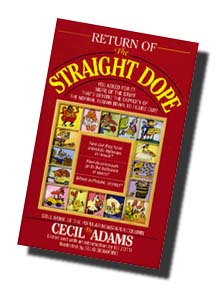 Return of the Straight Dope, by Cecil Adams. Edited and with an introduction by Ed Zotti. Illustrated by Slug Signorino. Published by Ballantine Books 1994. 418 pages plus index. ISBN 0-345-38111-4

How can they have interstate highways in Hawaii? How do astronauts go to the bathroom in space? Is there a place called Podunk? Can people really hear radio broadcasts through their teeth? What does Queen Elizabeth carry in that purse? Who decided we have to put up yellow ribbons every time there's a war? What was Barney Rubble's job? So how DO porcupines mate? 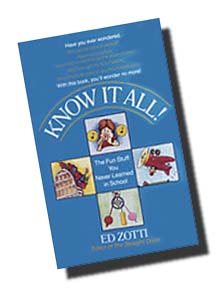 Know It All: The Fun Stuff You Never Learned in School, by Ed Zotti. Illustrated by Randy Verougstraete. Published by Ballantine Books 1993. 211 pages plus index. ISBN 0-345-36232-2

Ed Zotti is of course Cecil's feeble but well-meaning assistant. Know It All is a kid's version of the Straight Dope. It covers many of the questions found in Cecil's books but is written in terms even Ed can understand. Also, frankly, this is the PG version, so you can give it to Aunt Minnie without worrying that she's going to report you to the police.

We will now pause in case you need to do any last minute shopping.

Ah, you're back. OK, last thing. In an effort to provide a public service to the Net (and to hopefully cut down on the number of times questions in the books get posted and reposted to alt.fan.cecil-adams), we will be making scanned indexes of the books available so you can refresh your memory on what was covered where.

Note on the Indices: The indices have been scanned in from the books themselves. The state of OCR technology being what it is, many characters get garbled in the process. I have corrected the text by spell-checking it, but it is impossible to verify the listed page numbers without going through each line of text, which would be quite a chore. So, don't bet the farm on the accuracy of the page numbers in the indices.

Index of The Straight Dope

Index of More of the Straight Dope

Index of Return of the Straight Dope