PAISLEY, United Kingdom (AFP) - At the age of just 20, Ms Mhairi Black has become Britain's youngest member of Parliament since 1667, in a victory which symbolises an expected nationalist landslide in Scotland.

Ms Black still has to complete her final exams at Glasgow University but will now be putting her politics degree into practice as the pro-independence Scottish National Party (SNP) MP for Paisley and Renfrewshire South.

The no-nonsense blonde, who pronounces her first name as "Mary", won a majority of over 5,000 in Thursday's election to topple Mr Douglas Alexander, the Labour party's 47-year-old foreign affairs spokesman and campaign chief.

As the result was announced, a roar of approval went up from her supporters at the count centre, but Ms Black spoke in a steady voice as she vowed to improve life for ordinary Scots. "We will work to put an end to the austerity cuts that are hurting people in communities both north and south of the border," she said.

Ms Black grew up in a family that supported Labour but like many in Scotland, has turned her back on the centre-left party that she says has become too distant from its supporters and left-wing roots.

Exit polls suggest that the SNP is set to make massive gains, taking all bar one of Scotland's 59 seats, most of them from Labour. 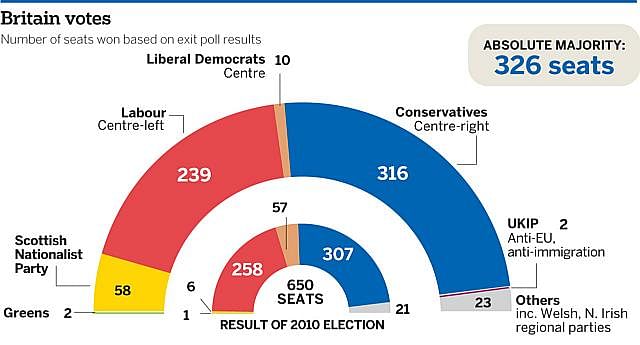 Ms Black says her hometown has been in decline for decades, with one in five people in Paisley now living in poverty and one in three families forced to use food banks.

She campaigned for Scottish independence in last September's referendum. The vote was lost, but she told AFP a few weeks later: "It doesn't mean the dream has died."

"The vote result was absolutely heartbreaking, gut-wrenching. But less than a week later I was raring to go. Everyone is pumped up, saying, 'What's next?'"

What's next has turned out to be the House of Commons, where Ms Black has promised to stand up for her constituents in a way she says that her Labour predecessor never did.

She has called Mr Alexander a "career politician", and said during the campaign: "I'm coming across door after door of people who are tired of having an MP who's never here."

In her run for Parliament, Ms Black talked up her leftist credentials and her roots, including full-throated support for local football team Partick Thistle.

Her biography on the SNP's website says Ms Black campaigned against the war in Iraq and worked for the charity Oxfam - but said the referendum was a turning point for her.

She has been criticised for an abrupt style and threatened to "put the nut in" (head butt) Labour representatives after the referendum.

She immediately said she regretted her words and put them down to excessive passion.

To those who criticise her lack of experience, she retorts that she is old enough to pay taxes or fight in a war.

"I'm not the one who should be nervous - it's all of them down there (in London) who have to answer for what they've done. They're the ones who have to be accountable," she said.

Join ST's Telegram channel and get the latest breaking news delivered to you.

Terms & conditions apply
Frequently asked questions
Back to the top