Brooks Hall at the University of Virginia:

One of the most imposing, yet controversial, buildings on the grounds of the University of Virginia is the three-story Victorian/Gothic structure known as Brooks Hall. Standing prominently on University Avenue, just east of the Rotunda, the building is a forceful part of the visual landscape which surrounds the original core of Jefferson's Academical Village. It is a forceful part of the historic landscape as well, testifying silently to many interesting themes in late nineteenth-century history which have only barely been explored to date. As George Shackelford wrote in this journal in 1982, the Victorian era at the University of Virginia is an often neglected part of the University's history.(2) In this paper I hope to provide a context in which one Victorian event, the design and construction of Brooks Hall, can be better understood. Brooks Hall opened in 1877 as the "Lewis Brooks Hall of Natural Science," and it was among the most impressive and innovative museums of natural history in the nation in its day. 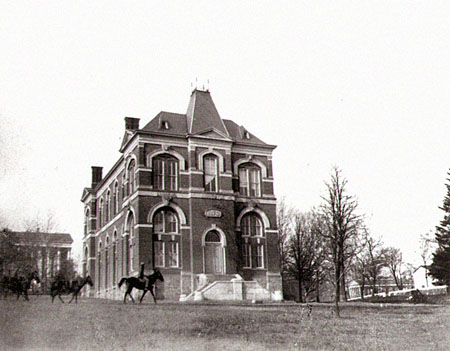 The importance of this museum and building is underscored when one considers that when Brooks Hall opened in Charlottesville, the National Museum of Natural History in Washington, D.C., the American Museum of Natural History in New York, and the Field Museum of Natural History in Chicago were all still years from completion. In short, the building and the museum were an important addition to the University, both intellectually and architecturally. Nevertheless, history has not been kind to the building. Although at first warmly received by the University and the community alike, from the early twentieth century on Brooks Hall has been controversial due to its perceived lack of architectural and historical "fit" with the neighboring neo-classical Academical Village. Brooks Hall ceased functioning as a museum by the 1940s, and antagonism toward the building peaked in 1977 when the Board of Visitors passed a resolution calling for its demolition, stating that wthe location of Brooks Hall next to the Rotunda does detract from the appearance of the Rotunda as a focal point of the Univer-sity."3 Objections from the niversity and the state preservation community prevented the demoliti on, and the building still stands as the current home of the Anthropology and Art departments.

Most people know the building today simply as the one with the carved animal heads on the walls, or as the one with the names on the walls (the names of prominent natural historians are written in stone on the building's facade). Many older residents and visitors to Charlottesville recall it as the building with the elephant in it," as it did in fact house a reconstructed life-size mammoth in its main gallery for seventy years. Brooks Hall is also the subject of one of the most common bits of fanciful folk history concerning the University that passes from generation to generation among students and visitors to the Grounds. That folk tale suggests that the building's presence is the result of a mix-up with a design that was intended for a northern university (most often Yale), where it is suggested that a neo-classical structure designed for Virginia can be found. There is no truth to this story, but folklore often serves to offer a rationale for that which seems mysterious and otherwise unexplainable. Brooks Hall remains to many just such an enigma.

As an occupant of an office in Brooks Hall, I became particularly intrigued by the mystery of the building. Like many people today, I questioned why this building is here in this seemingly intrusive architectural style. In addition, I became curious about some specific questions, such as who was Lewis Brooks, and what was the context in which he donated money to the University for this building? Finally, I was haunted by the names written in stone around the perimeter of the building, some of which were familiar to all, others now fairly obscure. Researching the answers to these questions has resolved the mystery of Brooks Hall and has provided a context in which the historic value of the building to the University and the region can be understood. The story that the building tells on its facade everyday is anything but hidden, but it is one perhaps that requires translation in the late twentieth century.