In France, Prisons Filled With Muslims 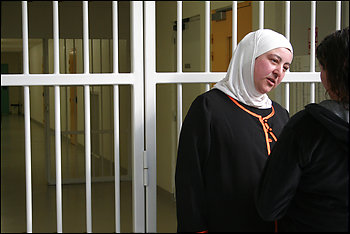 Samia El Alaoui Talibi, who with her husband ministers to Muslims at a prison in northern France, talks to an inmate. Activists blame France's social policies for the disproportionate number of Muslims in its prison system. (By Molly Moore -- The Washington Post)
Buy Photo
By Molly Moore
Washington Post Foreign Service
Tuesday, April 29, 2008

SEQUEDIN, France -- Samia El Alaoui Talibi walks her beat in a cream-colored head scarf and an ink-black robe with sunset-orange piping, an outfit she picked up at a yard sale.

After passing a bulletproof window, El Alaoui Talibi trudges through half a dozen heavy, locked doors to reach the Muslim faithful to whom she ministers in the women's cellblock of the Lille-Sequedin Detention Center in far northern France.

It took her years to earn this access, said El Alaoui Talibi, one of only four Muslim holy women allowed to work in French prisons. "Everyone has the same prejudices and negative image of Muslims and Islam," said Moroccan-born El Alaoui Talibi, 47, the mother of seven children. "When some guards see you, they see an Arab; they see you the same as if you were a prisoner."

This prison is majority Muslim -- as is virtually every house of incarceration in France. About 60 to 70 percent of all inmates in the country's prison system are Muslim, according to Muslim leaders, sociologists and researchers, though Muslims make up only about 12 percent of the country's population.

On a continent where immigrants and the children of immigrants are disproportionately represented in almost every prison system, the French figures are the most marked, according to researchers, criminologists and Muslim leaders.

"The high percentage of Muslims in prisons is a direct consequence of the failure of the integration of minorities in France," said Moussa Khedimellah, a sociologist who has spent several years conducting research on Muslims in the French penal system.

Sociologists and Muslim leaders say the French prison system reflects the deep social and ethnic divides roiling France and its European neighbors as immigrants and a new generation of their children alter the demographic and cultural landscape of the continent.

French prison officials blame the high numbers on the poverty of people who have moved here from North African and other Islamic countries in recent decades. "Many immigrants arrive in France in difficult financial situations, which make delinquency more frequent," said Jeanne Sautière, director of integration and religious groups for the French prison system. "The most important thing is to say there is no correlation between Islam and delinquency."

But Muslim leaders, sociologists and human rights activists argue that more than in most other European countries, government social policies in France have served to isolate Muslims in impoverished suburbs that have high unemployment, inferior schools and substandard housing. This has helped create a generation of French-born children with little hope of social advancement and even less respect for French authority.

"The question of discrimination and justice is one of the key political questions of our society, and still, it is not given much importance," said Sebastian Roche, who has studied judicial discrimination as research director for the French National Center for Scientific Research. "We can't blame a state if its companies discriminate; however, we can blame the state if its justice system and its police discriminate."

As a matter of policy, the French government does not collect data on race, religion or ethnicity on its citizens in any capacity, making it difficult to obtain precise figures on the makeup of prison populations. But demographers, sociologists and Muslim leaders have compiled generally accepted estimates showing Muslim inmate populations nationwide averaging between 60 and 70 percent.

• 10 Global Issues Obama Won't Talk About But Should - By Elizabeth Dickinson
• NastyLeaks - By Robert M. Danin
• The Audacity of What? - By Joshua E. Keating

Multimedia reports on the struggle for equality around the globe.

Ways you can get us