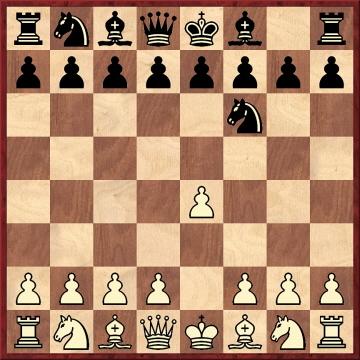 Michael McDowell (Newtownards, Northern Ireland) suggests that The World of Chess by A. Saidy and N. Lessing (New York, 1974) has a large number of errors. On page 174 we learn that Alekhine ‘introduced the defense which bears his name (1 P-K4 N-KB3), but, oddly enough, never played it again’. Of course, this is untrue, although it is accurate to say that Alekhine became rather disillusioned with the defence in later years. What is particularly interesting is how such an historical blunder can be made in the first place.

An endnote on page 259 of Chess Explorations stated:

‘For example, Alekhine played Alekhine’s Defence against Nimzowitsch at Semmering, 1926, Dresden, 1926 and New York, 1927, losing the first game and drawing the other two.’

‘The howler about Alekhine’s solitary use of the defence bearing his name antedates Saidy and Lessing. It goes back at least as far as R.N. Coles’ Dynamic Chess (London, 1956) – his introduction to A. Steiner v Alekhine, Budapest, 1921.’

On page 259 of Chess Explorations we added:


Hugh Myers (Davenport, IA, USA) points out that on page 140 of Paul Keres Chess Master Class by I. Neishtadt (Oxford, 1983) it is stated that Alekhine’s Defence ‘had been employed earlier by the Moscow player M. Klyatsky’. Is this, he asks, the Mikhail G. Klyatskin, 1897-1926, in Gaige’s Catalog? Mr Myers informs us that 1 e4 Nf6 received some publicity from its use in tournament odds games by Pearson in 1862, but that Russians should have known about it for a long time (it was in A. Petroff’s Shakhmatnaya igra, 1824). Petroff no doubt picked it up from Allgaier; both gave 2 e5 Ne4 although in 1824 Petroff did mention 2...Nd5 3 c4 with the idea of 4 d4. Which was the earliest Allgaier edition to give what was subsequently ‘Alekhine’s Defence’?

‘The Russian version of the Keres book gives Klyatskin, a study composer who liked 1 e4 Nf6. See page 165 of the first volume of Tartakower’s Best Games for a linking of Klyatskin and Alekhine as the names for this defence.’

‘That doesn’t quite answer the question because Vienna, 1819 was the fourth edition of Allgaier ... The first two editions were 1795/1796 and 1802. I would like to know what those editions say about “Alekhine’s Defence”, as compared to the 1819 edition.’

Rob Verhoeven tells us that the 1819 fourth edition of Allgaier was the first in which ‘Alekhine’s Defence’ was mentioned.

We now note that pages 42-43 of the January 1898 BCM published the following game:

(Notes from The Standard, reproduced in the BCM) 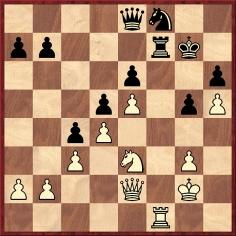 Within a few minutes of coming across the above game we were able to construct a detailed picture of John Edmund Hall (1853-1941) simply by following up the references in Chess Personalia. Without Gaige’s book, this would have been impossible.


Another game by the same player has been discovered by Alan Smith and published by him on pages 19-20 of the GMCCA Bulletin (Manchester), Autumn 1999: 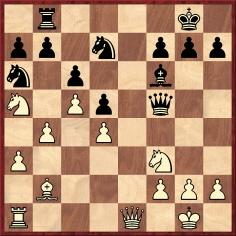 The original source is given as the Bradford Observer Budget, 8 April 1893.


Here is the brief death notice of Edward Hymes from page 156 of the June 1938 Chess Review:

‘Mr Hymes was one of America’s finest players in the ’90s and the turn of the century. He distinguished himself in many important team matches, and was noted for his original opening style. For example, he frequently played the defense now named after Alekhine!’

This prompts us to raise the question of when the term ‘Alekhine’s Defence’ was first employed. The great master’s earliest tournament games with 1 e4 Nf6 were at Budapest, 1921 against Sämisch (10 September) and E. Steiner (15 September); these were his only two games in the tournament where the opportunity for that opening arose. The former game was a 24-move draw, but Alekhine annotated his win over Steiner on pages 138-142 of the 2/1922 Kagans Neueste Schachnachrichten. The heading merely named the opening as ‘Irregular’.

Subsequently annotating the game on pages 213-215 of the May 1922 BCM (where the heading was ‘Irregular Opening’), Sir George Thomas wrote:

‘This novel defence was introduced by Alekhine at the Budapest tournament, where he adopted it several times; and since then it has been further tested by other players (in addition to Alekhine) at The Hague and elsewhere. So far, it seems to have stood the test of practice quite well; though there is doubtless much still to be discovered in regard to it. It has been named, tentatively, Alekhine’s Defence; and is clearly a novelty of considerable importance, opening up, as it does, a new field for investigation.’ [The spelling Aljechin has been ‘modernized’ above. Sir George’s reference to ‘several times’ was an error.]

May 1922 was also the date on the cover of the first monograph on the opening, published in Berne: Die Aljechin-Verteidigung by Hans Fahrni. In the first paragraph of the introduction, in which he explained that he was dedicating the booklet (28 pages) to Wilhelm Bonacker, Fahrni wrote that he had decided to call the opening ‘Alekhine’s Defence’. For reference, his exact words were: 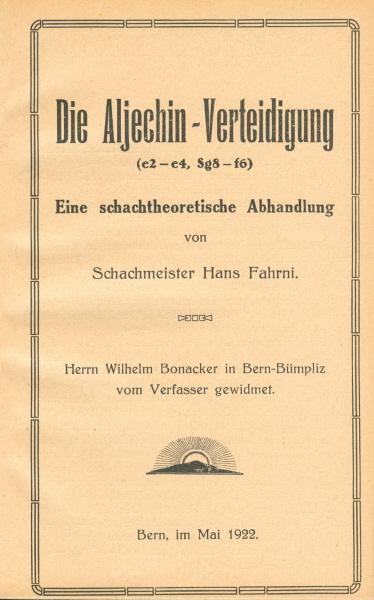 The earliest instance that we have found of Alekhine playing 1...Nf6 in reply to 1 e4 is in a consultation game against A. Donegan, E. Müller and O. Zimmermann (Zurich, 27 August 1921), as published on pages 165-167 of the November 1921 Schweizerische Schachzeitung: 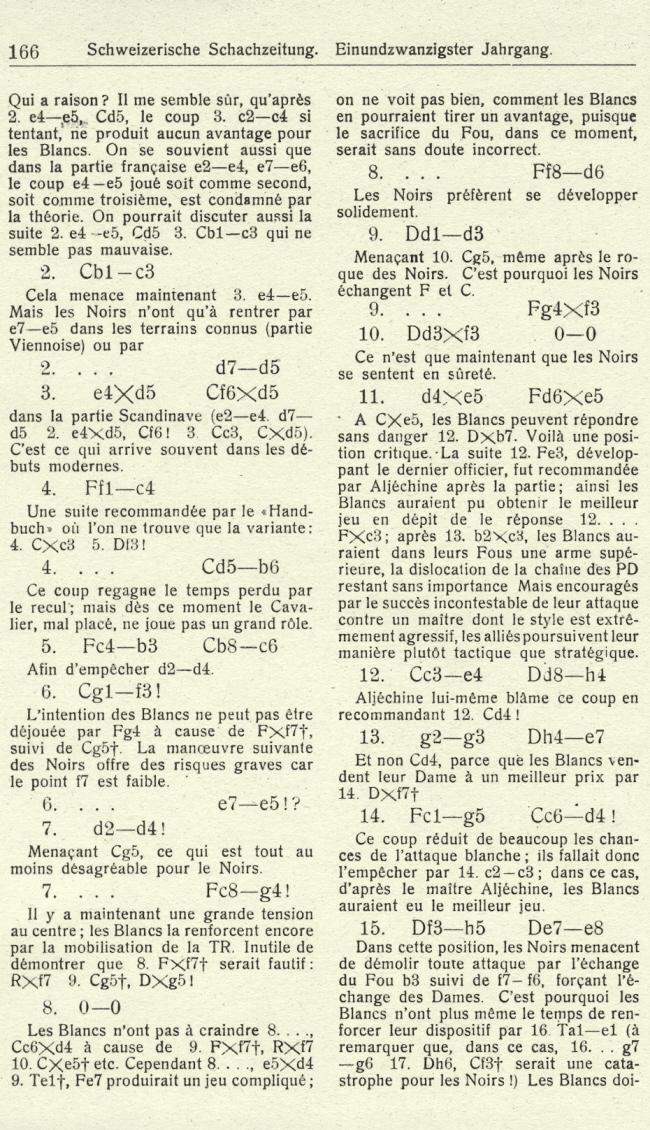 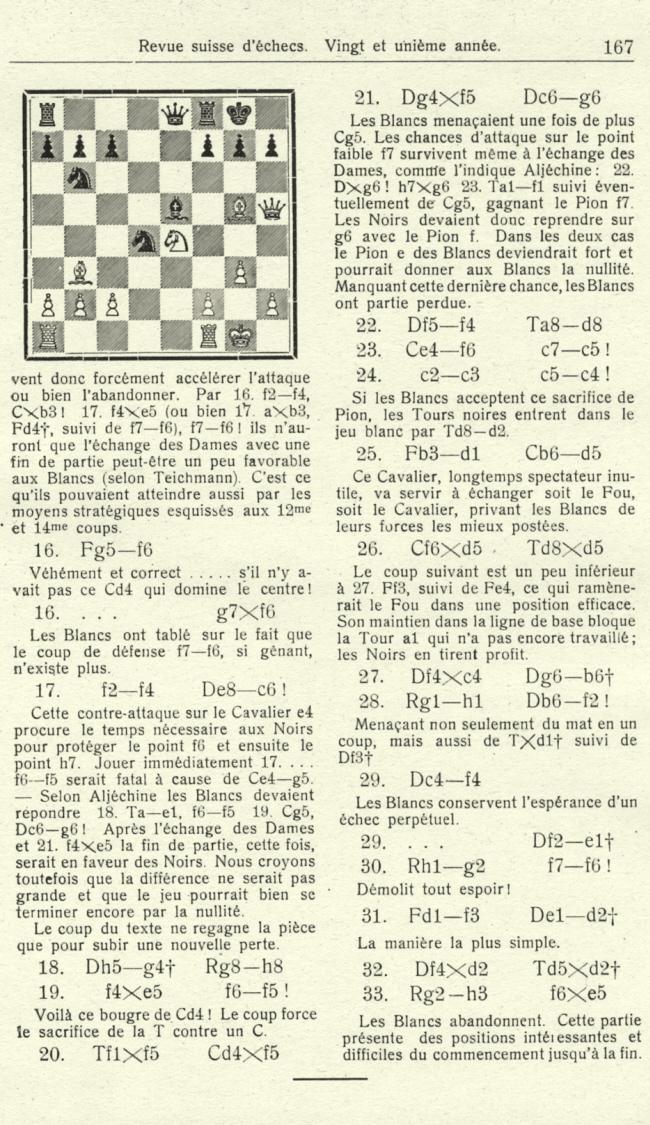 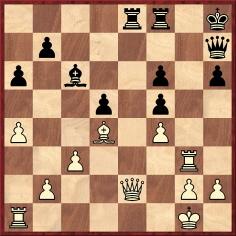 To the Chess Notes main page.

To the Archives for other feature articles.