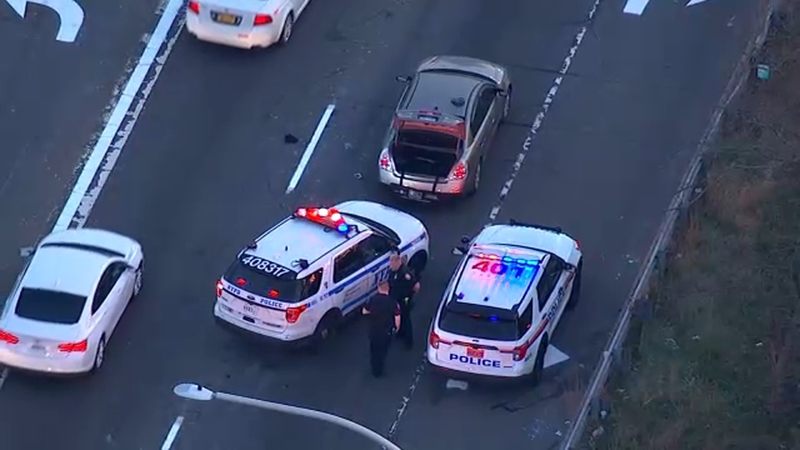 4 charged after body found in car trunk, including victim's boyfriend

INWOOD, Long Island (WABC) -- Five people have now been arrested after police made the gruesome discovery of a woman's body in the trunk of a car during a traffic stop, including the victim's boyfriend, though only four are charged in connection with her death.

A federal task force in Queens observed several males place a large object in the trunk of a sedan just before 2 a.m. Tuesday.

The agents followed the car onto the Nassau Expressway and pulled it over just east of JFK Airport. They immediately noticed a strong smell coming from the trunk.

That's where they discovered the body of 31-year-old Nasarth Claure, wrapped in a blanket. She had apparently suffered several stab wounds, believed to be caused by a machete.

Rigeo Yohairo, 20, and 21-year-old Jose Sarmiento are charged with murder and criminal possession of a weapon, while 26-year-old Rodolfo Lopez is charged with concealment of a human corpse and tampering with physical evidence.

The fifth person, the woman's boyfriend, was charged with previously attacking her - but not in her death.

Anander Henriquez, 28, is charged with strangulation assault in connection with an attack earlier this month.

Police say the victim had previously gotten an order of protection against Henriquez last November.

At least two of the suspects, including Henriquez, are reputed MS-13 gang member, but the killing is likely linked to a domestic dispute he had with the victim.

He also had a prior arrest for punching and hitting Claure with a metal rod behind a Chase bank in Far Rockaway, Queens, on January 17.

The four men were already being investigated for their alleged MS-13 affiliations, but the killing does not appear specifically gang related.

The investigation is continuing, and more arrests are possible.

Several police agencies are assisting and there are heavily armed officers blocking off the area.