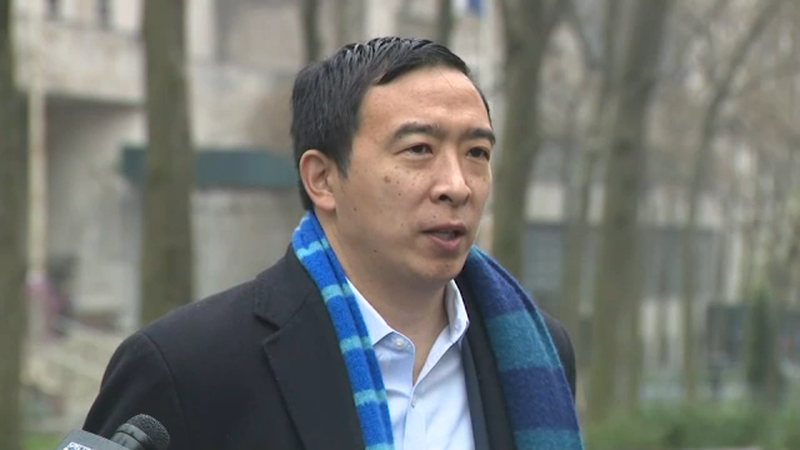 NEW YORK (WABC) -- As the race for the 110th mayor of New York City heats up, there is new criticism coming to light of frontrunner Andrew Yang.

A video hit Twitter Thursday morning that shows an unidentified man use the B-word to describe women and Yang laughs in response.

"You don't use that word and absolutely you do not get to engage in that behavior, it is not funny, we do not laugh, we do not turn our backs and walk away," candidate Maya Wiley said.

"We couldn't believe our eyes or ears. When Andrew Yang was asked by supporters about violently assaulting women, he responded by laughing. But this isn't a laughing matter, and it isn't just "locker room talk." Language like this perpetuates real violence against women. And laughing at it is the latest in a long list of troubling evidence about Yang's character that follows countless reports of toxic masculinity, misogyny, and bro-culture that have defined his past campaigns and companies. To put it plainly - this is disqualifying for someone who is seeking to be mayor of New York. When too many political leaders have betrayed our trust, abused their power, and sexually harassed and assaulted women, we need public officials who will protect women instead of laugh at us. We need leaders with the backbone to stand up to misogyny when it is happening in real time. Andrew Yang has failed the test - and New York women - time and time again. We deserve better."

"We need a mayor who's going to stand up and say no, heck no," Wiley said.

On the campaign trail, Yang has come across as an affable, nice guy. His campaign released said, "The video simply reflects a quick awkward moment... when Yang was trying to be nice to someone on the subway he didn't know."

WATCH: 1-on-1 with Andrew Yang: Where he stands on NYC's issues
EMBED More News Videos

Andrew Yang is speaking out on where he stands on some of the biggest issues that New York City is facing amid the COVID pandemic.

Yang tried to explain on Thursday.

"I think most New Yorkers know that I try to be friendly to people, and in this case someone wanted a video and I thought I'd be friendly... he said something that was plainly inappropriate that I didn't find funny at all and so I walked away," Yang said.

It's far too early to see if this small video clip will have a lasting impact in the campaign.