The League’s Typelog is a place where people and ideas come together. We collect different ideas and type projects, not only to inspire people, but to spark collaborations among type-enthusiasts everywhere.

If you’d like to contribute to The League and the open-source type movement, feel free to join us and share your ideas, type-related projects, and typefaces, by submitting a post to this collaborative type blog. 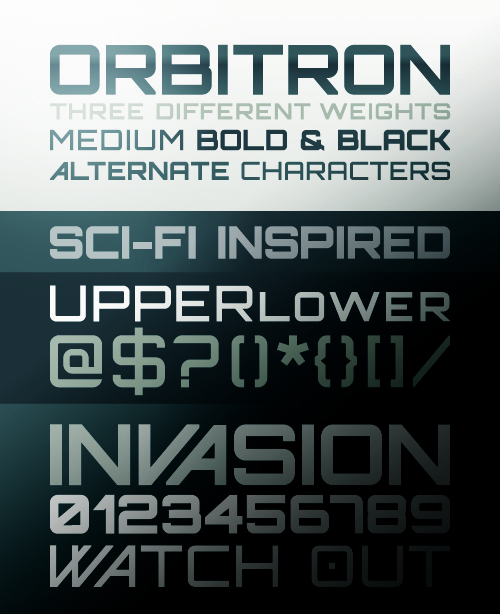 Orbitron is a typeface I’ve been working for the past few months. It’s a geometric sans serif display typeface, potentially an alternative to Eurostile or Bank Gothic. It features 3 weights: Medium, Bold, and Black. It also features some alternate characters including the A, V, W and O seen above. Assuming it gets your stamp of approval, I’d love for it to become a part of The League’s library of open source fonts.

CAST YOUR VOTE FOR THIS FONT

Since we’re trying to make the font submission process to The League more open, we’d like to open the floor and hear what you all think about the font. For the next 7 days, you can help us decide whether or not we should add Orbitron to The League’s font collection by casting a vote. You’re also welcome to post comments and other feedback along with your votes. After the 7 day period, we’ll announce what the outcome is.
To vote, simply leave an answer to the question below in this format: VOTE: YES or VOTE: NO

So what’s your vote for Orbitron?

We went window shopping for some type

For a while now, we’ve been thinking about commissioning a type designer/foundry to create a typeface for The League, which we can then release as an open-source font, and people can use freely. Nothing’s been finalized yet, but it seems that we’re finally getting the ball rolling, slowly.

WHAT SORT OF TYPEFACE?

One of the things you may realize about most of The League’s typefaces, is that a lot of them are great display texts, but only a few are well suited for small text and longer paragraphs.

So in the spirit of broadening The League’s type collection, we want to comission a typeface that would work particularly well for small text, but also looks good on display. Something timeless and usable in different places. We know we want to have a whole family (with multiple weights and styles). However, we haven’t yet decided exactly what sort of typeface we want to make (serif / sans serif / slab serif / oldstyle). So to help us focus on a direction we want to go into, we went searching for some inspiration. This is what we collected. 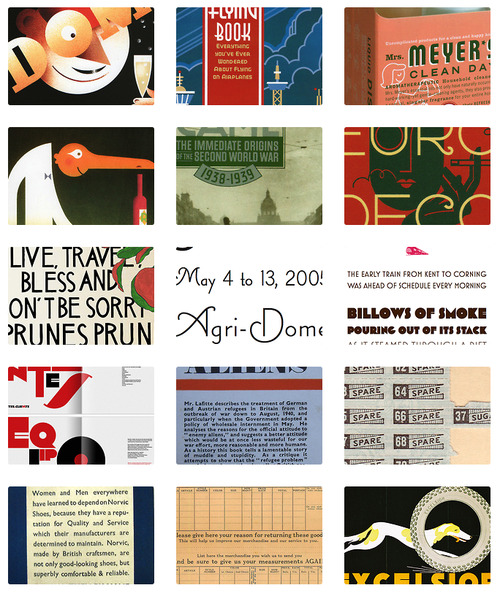 As you can see, we’re huge fans of vintage typefaces. We found some cool typography in these old posters, vintage bottles, and packaging, as well as some contemporary works too. You can browse through them if you like.

WHAT DO YOU GUYS THINK?

This is pretty funny. Just one question though, is that last one a middle finger? Hmm… yup, pretty sure that it is. Even more awesome!

An academic project from Matt McInerney, graphic designer and co-host of the awesome podcast series called Read Between the Leading.

He took the re-designed Scrabble logo and re-re-designed it. He felt that the newer, more polished logo lacks the character and personality of the original logo. So he went ahead and add back in some of the missing personality on his own take of the logo. I have to say, it looks pretty darn good!

Here are what the actual Scrabble logos look like: 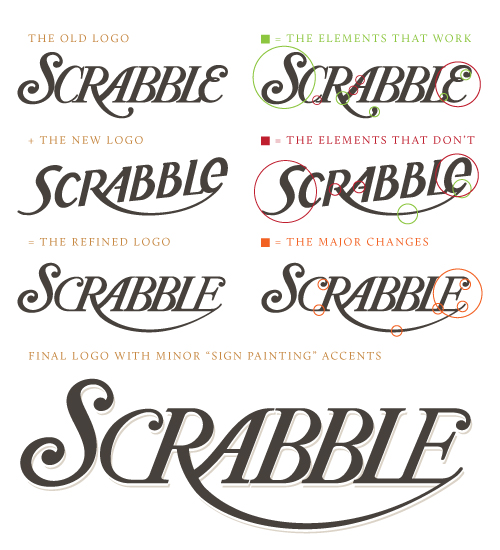 Why do I think this version works best?

I feel that a lot of companies have been redesigning their logos to make it fresher or more contemporary, you might notice the new Jack in the Box logo, for example.

I think sometimes what companies need to keep in mind when redesigning their brand is to consider what the old one means to their consumers. I know some companies already do this, Sneakers candy bar introduce a new version of their branding, little by little, through their packaging, they do it slowly so the consumer won’t get shocked or confused.

I think why Matt’s version of the logo works better is because it’s like taking the old logo that we’re all familiar with, and adding small new elements to it to make it look better (typography-wise, like fixing the CR and LE ligatures, and the nice swash for the R), but without changing the whole look and feel.

While the actual new logo seems like they’re just replacing the old logo with a new font, while still not resolving the typographic problems that the old one has (I think the connection between the LE on the original and the actual new logo is especially awkward). So kudos to Matt’s version of the logo for actually addressing those type-issues. And that’s why I like it :-D

This is just one part of a larger academic project in which I’m taking the Scrabble packaging (the board, the tiles, the box) and re-imagining & redesigning it. One of my first steps in the process was redesigning the wordmark. In case you weren’t aware, Scrabble rebranded in March 2008, ditched the iconic logo that I’m sure we all remember as kids, and moved towards a slicker, more contemporary looking wordmark. There are a few elements of the wordmark that I think are good, but for the most part, I don’t like it. I think it abandons too much of the original wordmark’s character and I think dropping the ‘S’ especially is a mistake.

So I tried identifying exactly what I like about the old and the new, pointing it out, and redesigning from there. I wanted to revive some heritage and clean up some problem areas. Above you can see some of the process and the result.

I’ll post pictures of more process and final results soon. Also a quick note: this isn’t an official change, this is my own take on the logo for academic purposes. Feel free to reblog it, but I think that’s an important note to include with it.

A Letter A Day

A Letter A Day. A neat little project by Jaime Van Wart, a personal project she’s engaged in, to “increase production and generation of formal ideas and to ultimately create fully resolved original typefaces by gathering feedback and criticism from the design community.”

Definitely check her out, and give her some feedback! Some of those sketches can really turn into some neat typefaces!

House fonts are fun, but I’ll never know when I’ll get a chance to use them.

Create a font from your own handwriting!

With fontcapture.com you can create a font from your very own handwriting.

There’s no software to download and install, all you need is a printer and a scanner. Simply fill in the font template, scan and upload it to our website, and download your completed font. The fonts you create using fontcapture.com can be used on both Windows and Mac computers.

Look! We even made our own… she’s adorable isn’t she?

A big book about pie… what’s not to like?

“A big book about pie in all its glorious forms. The book explores various different aspects of pie such as what constitues being a pie, who invented the pie, the rise and fall of pie.”

Reviving an Old Gothic: making an open font out of a classic

WHAT IS A REVIVAL TYPEFACE?

A revival typeface, simply put is a remake of an original typeface, usually older ones that are designed a long time ago. We’ve all seen different revivals for a classic font, take Garamond for example, there are hundreds of different Garamonds out there, they’re each a little bit different and has their own unique qualities, as summarized by this article, which explains in detail how different type foundries decided to take the original typeface and create their own version of it.

We decided that The League too, should create its own version of a classic typeface, and we want a version thats free, not only in terms of price, but also in terms of freedom.

We chose Alternate Gothic No.1 because we love the typeface. Its a classic, it can be futuristic or antique, but it’s simple and no-nonsense. And after doing a bit of research, we decided that Alternate Gothic is a safe typeface to revive. Which means that we won’t be stepping on anyone’s toes, by releasing our own version of it.

Alternate Gothic was originally designed by Morris Fuller Benton for the American Type Founders Company (ATF) in 1903. The company went bankrupt in 1993. And since the original typeface was created before 1923, the typeface is in the public domain.

What is the Public Domain exactly? In short, it is a collection of works or intellectual properties which are not owened by anyone, making it a public property, and available for anyone to use for any purpose. The Bible or national anthems are examples of such works.

There are different ways that an intelectual property can enter the public domain. One way is the one described earlier, if the work was published before the 20th century copyright laws existed (1923) or if it has expired its natural term of copyright period which is 70 years after the author’s death.

It’s imporatant to review the ethical guidelines when remaking a font. Especially one that is not an open font. Here are some questions taken from TypeRight Ethics Guide, to ask before reviving a typeface: Has the latest copyright owner of the typeface been dead for more than 75 years? Is the copy right still current? And be sure to create your revival from the original artwork, and not from an existing digital typeface.

For the creation of League Gothic, we used scans we found of the original Alterate Gothic No.1 (ATF). From those scans we traced each character that was available to us: uppercase A to Z , lowercase a to z, numbers, as well as key punctuations. For the rest of the glyphs, such as special characters like accents and symbols, we took the liberty to create our own designs that would match the rest of the typeface.

GETTING STARTED & FINDING THE RIGHT RESOURCES

There are a few places you can go to find more information about the open-source type movement. The Open Font Library is a great resource for learning more in depth about the subject. It covers a lot of the bases, everything from open fonts, where there’s a list of different open fonts you can find on the web, high quality scans of typefaces that can be digitized and turned into open fonts. There is also a section about font licensing, and a comparison between different kinds of licensing as they relate to type, from Public Domain to the Open Font License.

Ellen Lupton’s Free Manifesto, is another great resource for an overview of the conversations surrounding the open source and the copyleft movements.

This is the starting point. Figuring out what to make. Next comes the fun part, figuring out how to make a revival font.

We’re proud to announce that after months of hard work, we are releasing our very own font! League Gothic is a revival of an old classic, and one of our favorite typefaces, Alternate Gothic No.1. We decided to make our own version, and contribute it to the Open Source Type Movement.

We’d like to welcome Mr. Barry Schwartz and his awesome new typeface Sorts Mill Goudy to The League! This classic serif typeface is a revival of another one of Mr. Schwartz’s earlier typefaces called Goudy Bookletter.

News from The League of Moveable Type!

The Typelog is presented by The League of Moveable Type
Design & production Copyright 2009 by We Are A Good Company, LLC.