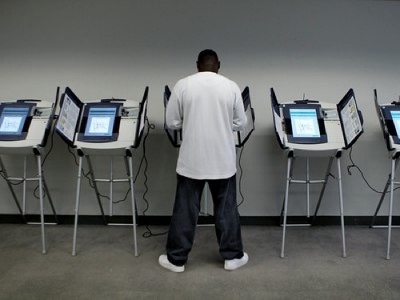 In 2011, Color Of Change led a winning strategy to target a dangerously influential, secretive right-wing policy promoter, forcing more than 100 of its corporate sponsors to withdraw support.

What if you found out you were funding efforts to suppress the Black vote every time you bought groceries? What if you realized you were helping pass laws that threaten Black communities every time you went to the pharmacy, gas station or bought something online? How outraged would you be?

The American Legislative Exchange Council (ALEC) is a national right-wing policy group that effectively allows corporations to buy state legislation. Funded and guided by the largest and most prominent corporations in America, ALEC is a dangerously effective, behind-the-scenes player in passing dozens of laws that threaten Black people’s livelihood and well-being. They have conceived, written, promoted and—through their network of corporate-influenced state legislators—helped spread discriminatory voter ID laws in states across the country, which disproportionately block Black voters, immigrants, older people and other groups from voting. They worked with the NRA to spread the so-called “stand your ground” laws that emboldened racist vigilantes to shoot at innocent people—the same law that shielded George Zimmerman from being brought to justice after he murdered Trayvon Martin. Laws developed and promoted by ALEC, on behalf of their corporate and right-wing sponsors, prevent minimum wage enforcement, roll back rights for working people, help prison companies lock up more and more Black people for profit, and enable corporations to poison our communities through environmental deregulation.

For way too many years, ALEC had been creating, promoting and helping to pass these laws in state after state across the country, and almost no one knew that household names like Coca-Cola and AT&T were behind it. Yet today, their reach and influence is a whole lot less.

In 2011, Color Of Change hatched a winning strategy to target ALEC, and force its corporate funders to make a choice: either stop funding ALEC, or become widely known as a company dismantling the gains of the civil rights movement, and putting Black people, families and communities in danger.

We partnered with our allies at the Center for Media and Democracy, who were leading a groundbreaking investigation to expose ALEC’s corporate funders and their influence on the group’s policies and scale. Armed with their research and a focused strategy, and powered by the voices of our members and the members of allied groups like CREDO Action, PCCC and other partners, we used both coordinated private outreach and public pressure to hold corporations accountable for funding ALEC’s agenda.

More than 100,000 Color Of Change members signed a petition to send a powerful message to these companies: you can’t take Black people’s money by day and try to take away our votes—or fund policies that take away our lives—by night. At the same time, we talked directly with companies funding ALEC to make sure they heard our members’ voices and knew we were prepared to forge a powerful association between their brand and ALEC’s most harmful policies.

When corporations refused to pull their funding, thousands of Color Of Change members flooded their phone lines with calls. We also supported rallies at shareholder meetings and in front of the corporate headquarters of some of the most prominent companies funding ALEC. We told the story of our members’ activism in major media, while fighting off attacks against the campaign by the right-wing media, which erupted as soon as we started to gain ground.

In the end, we won, and successfully defined core ALEC policies as being outside the political mainstream. More than 100 corporations and nearly 400 state legislators left ALEC, and the group suffered a $1.2 million budget shortfall by the end of 2013. To control the damage, ALEC disbanded its public safety and elections task force, which was responsible for both the voter ID and “stand your ground” laws. Our campaign dramatically reduced the power of an organization hostile to Black America, and strengthened the power of Black consumers and communities to demand accountability from corporate America.

ALEC doesn’t only harm Black people—it’s a critical part of the right wing infrastructure that helps corporations write laws that hurt everyone but corporate CEOs. By challenging ALEC on racial justice issues, we were able to significantly reduce their power, protecting Black people and everyone else from the harm caused by their policies. And our campaign set the stage for other groups to pressure ALEC’s corporate funders on issues like climate change denial, successfully pushing tech companies like Google and Facebook to stop funding the group.

You can flip through a short, illustrated story about our campaign and its success here: www.colorofchange.org/alecontherun