In this tutorial, you'll build and publish a Cloudflare Workers function that serves assets from a storage platform (in this example, Google Cloud Storage) to your users. This approach, called "white-labelling", often takes the form of complex DNS configuration – thanks to Cloudflare Workers, and Cloudflare's CDN, we can build a powerful (and fast) solution to this problem in just a few lines of code.

This tutorial makes use of Wrangler, our command-line tool for generating, building, and publishing projects on the Cloudflare Workers platform. If you haven't used Wrangler, we recommend checking out the "Installing the CLI" part of our Quick Start guide, which will get you set up with Wrangler, and familiar with the basic commands.

One more thing before you start the tutorial: if you just want to jump straight to the code, we've made the final version of the codebase available on GitHub. You can take that code, customize it, and deploy it for use in your own projects. Happy coding!

To publish your project to Cloudflare Workers, you'll need a few things:

If you don't have those things quite yet, don't worry. We'll walk through each of them and make sure we're ready to go, before you start creating your application.

This tutorial makes use of sample images to illustrate serving data through your Cloudflare Workers function. If you have an existing set of images you'd like to use, you can upload those to your Google Cloud Storage bucket and use them – if you don't have an existing set of images, we've provided a sample set of profile pictures via UIFaces.co, formatted in numeric order (1.jpg, 2.jpg, … 199.jpg).

To follow along with this tutorial, using the data set we've provided, download the sample image collection here, and upload the zipped folder "faces" to root of your bucket. The directory structure should look like this:

Cloudflare's command-line tool for managing Worker projects, Wrangler, has great support for templates – pre-built collections of code that make it easy to get started writing Workers. We'll make use of the default JavaScript template to start building your project.

In the command line, generate your Workers project, and pass the project name serve-cdn-assets:

By default, Wrangler will use our worker-template. Wrangler templates are just Git repositories, so if you want to create your own templates, or use one from our Template Gallery, there's a ton of options to help you get started.

Cloudflare's worker-template includes support for building and deploying JavaScript-based projects. Inside of your new serve-cdn-assets directory, index.js represents the entry-point to your Cloudflare Workers application.

All Cloudflare Workers applications start by listening for fetch events, which are fired when a client makes a request to a Workers route. When that request occurs, you can construct responses and return them to the user. This tutorial will walk you through understanding how the request/response pattern works, and how we can use it to build fully-featured applications.

In your default index.js file, we can see that request/response pattern in action. The handleRequest constructs a new Response with the body text "Hello worker", as well as an explicit status code of 200.

When a fetch event comes into the worker, the script uses event.respondWith to return that new response back to the client. This means that your Cloudflare Workers script will serve new responses directly from Cloudflare's edge network: instead of continuing to the origin, where a standard server would accept requests, and return responses, Cloudflare Workers allows you to respond quickly and efficiently by constructing responses directly on the edge.

Any project you publish to Cloudflare Workers can make use of modern JS tooling like ES modules, NPM packages, and async/await functions to put together your application. In addition, simple serverless functions aren't the only thing you can publish on Cloudflare Workers: you can build full applications, or serverless functions using the same tooling and process as what we'll be building today.

The Cloudflare Workers project built in this tutorial will be a serverless function that runs on a wildcard route and receives requests. When the serverless function receives an incoming request, it should parse the URL, find what asset is being requested, and serve it from the configured Cloud Storage bucket. Because the asset will go through your Workers function, and through Cloudflare's network, you can also make use of both Cloudflare's default caching behavior, as well as your own custom logic, to ensure that as much data can be cached at Cloudflare's globally distributed data centers – the result is an easy-to-understand and highly performant CDN configuration, with the ability to customize it to your application's specific needs.

Currently, the Workers function receives requests, and returns a simple response with the text "Hello worker!". Begin configuring the function by adding an additional check – requests coming in to the function should only be GET requests. If it receives other requests, like POSTs or DELETEs, it should return an error response, with a status code of 405. Using event.request.method, the resulting code is below:

Given that the incoming request to the function is a GET, it should be clear that the bulk of our implementation will happen inside of that conditional, replacing the "Hello worker!" response. Create a separate function, serveAsset, which will house the majority of the implementation for the remainder of the tutorial:

Routing to your assets

Looking back at the original definition of this project, at the beginning of the "Build" section, the serveAsset function should parse the URL, find what asset is being requested, and serve it from the configured Cloud Storage bucket. To do this, the event.request.url field should be parsed using the URL library, and set to url. Given an instance of the URL class, url, there are a number of useful properties that can be used to query the incoming request. serveAsset should check the pathname, which contains the part of the URL after the host: for instance, given the URL https://assets.mysite.com/faces/1.jpg, the pathname will be /faces/1.jpg:

With that path available, the function can simply request the corresponding path from our Cloud Storage bucket. Given a constant BUCKET_NAME (we'll set it in this tutorial to "my-bucket"), set a BUCKET_URL constant, append url.pathname to the end of it, and fetch it to get your function's response:

At this point in the tutorial, deploying this script would give you a fully-functional project you could use to retrieve assets from your Cloud Storage bucket. Instead of wrapping up the tutorial here, let's continue to explore how configuring your CDN is really powerful with Workers, by making use of the Cache API.

To cache responses in a Workers function, the Cache API provides cache.match, to check for the presence of a cached asset, and cache.put, to cache a response for a given request. Given those two functions, the general flow will look like this:

The Cache-Control header is a common way that HTML responses indicate how they should be cached. The Workers implementation respects the Cache-Control header (as well as many others), in indicating how assets should be cached on Cloudflare's CDN. In building a custom asset serving solution, and enabling caching, you should set a custom Cache-Control header (in this example, we'll set it to public, and a max-age value of 14400 seconds, or four hours). When the asset is retrieved from cloud storage, the serveAsset function should construct a new instance of Response, copying much of the HTML response data from the cloud storage response, but overwriting the response headers. By doing this, you'll define your own custom caching information, and passing it to the Workers Cache API.

When you add something to the cache, it's important to note that an HTML response is designed to only be processed once in your code, according to the Service Worker spec that Cloudflare Workers implements. To get around this, we'll clone the asset response, using response.clone(), and pass that cloned response to the Cache API, and return the original response back from the function. The final code looks like this:

Before building and publishing your Workers script, there's one more thing to be added. Currently, if an asset is requested that doesn't exist, or if your bucket policy doesn't include public access to an asset, serveAsset will pass back the corresponding error page directly to the client. Instead of doing this, the returned response should be checked in handleRequest: if the status code is higher than 399 (where 200-level status codes indicate "success", and 399-level status codes indicate "redirection"), we can return a truncated response with just the status and statusText from response:

And with that, you're finished writing the code for this tutorial! The final version of your script should like this:

To make this script available for use, you'll need to build and publish it to Cloudflare using Wrangler. To do this, we'll first build the code, and then publish it:

After deploying your project, open up your browser to test retrieving your assets! For instance, if your Workers project is deployed to the route myassets.com, going to the URL myassets.com/faces/1.jpg should show an uploaded asset. In addition, you can inspect the request in your browser to confirm that it's being cached. Cloudflare's CDN will send a cf-cache-status header, with HIT or MISS, to indicate whether the content was a "cache hit" or not: 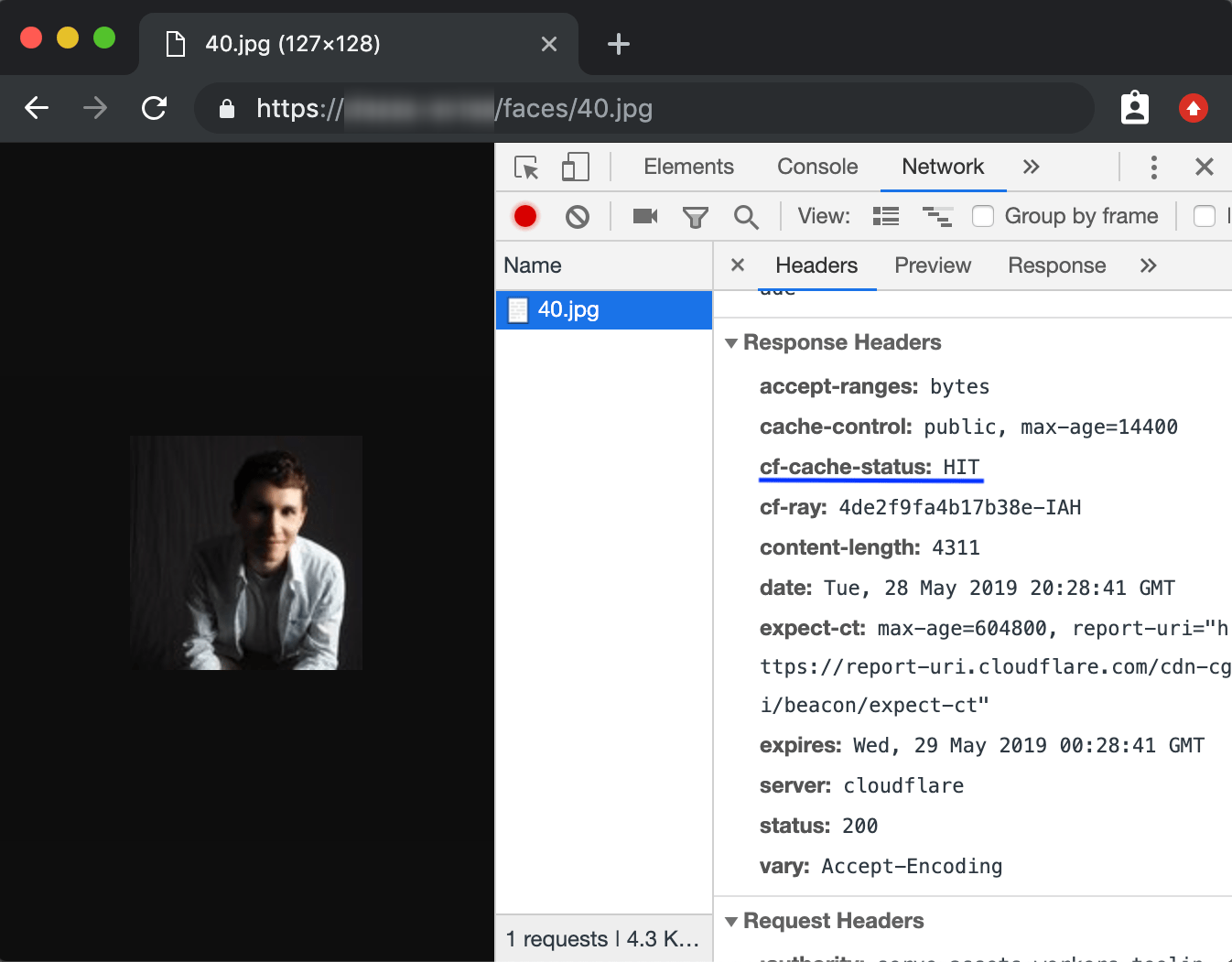 In this tutorial, you built and published a serverless function to Cloudflare Workers for serving assets from cloud storage. If you'd like to see the full source code for this application, visit the repo on GitHub.

If you want to get started building your own projects, check out the quick-start templates we've provided in our Template Gallery.