The Electoral College is the constitutionally-specified process that the United States uses to elects its President and Vice President. As this brief electoral college history shows, while it roughly tracks the total of votes citizens have cast in a presidential election (popular vote), results can be different.

Each state is allocated as many electors as it has members in the U.S. House of Representatives and the U.S. Senate. With the addition of three electoral votes for the District of Columbia in 1961, the college currently has 538 members. Each elector gets one vote each for President and Vice President. Prior to 1804, each elector cast two votes.

Electoral college history has often been surrounded by controversy, particularly in the 21st century. In two elections out of five in this century the College specified presidential election winners to be candidates who did not receive a popular vote majority. This has happened three other times in American history.

The history of the electoral college provides insights into why it came about and how it has evolved.

The delegates to the 1787 constitutional convention represented colonies of widely disparate populations. each desiring to maximize its power in the selection of the executive branch heads. Also, few of the delegates favored a representative or direct democracy.

These two policy currents merged into the creation of a compromise plan that apportioned the power to determine who heads the executive branch by population but with a disproportional advantage to the smaller states through an electoral college. The college was originally envisioned as independent and presumably empowered to choose winners on merit. Few delegates trusted that citizens had the wisdom to make the “right” selections by themselves but had enough competence to select electors who would make wise judgements.

Initially, state legislatures chose the electors in the majority of states, as the constructional convention delegates had envisioned. As the franchise was extended to more male citizens, a strong trend emerged to have the voters elect the electors and by the last two decades of the 19th century, the practice became universal.

On the first Monday after the second Wednesday in December after the November general election that includes a presidential election, the electors meet in their respective state capitals and cast their votes for President and Vice President separately.

The collective state votes are transmitted to Congress and each state’s electoral votes are counted in a joint session of Congress on the 6th of January of the year following the meeting of the electors.

The House selected Jefferson in 1800, under pre-12th amendment rules and determined a winner again in 1824 when it selected John Quincy Adams. Adams lost the popular vote which was the first ever counted.

Currently, 48 of the 50 states use a winner-take-all process that awards all a state’s electoral votes to the plurality winner of the actual ballots cast by the people. As an example, if ticket A gets 49 percent of the votes and ticket B gets 50 percent of the votes and all other tickets get 1 percent, ticket B gets all of that state’s electoral votes in the separate ballots for President and Vice President.

The Electoral College has generated a lot of controversy for several reasons. First, it can and has frustrated the will of the voters. In 1876, 1888, 2000, and 2016, the Electoral College selected winners who received fewer votes than their opponents in the general election. This led to the presidencies of Rutherford Hayes, Benjamin Harris, George W. Bush and Donald Trump, respectively. 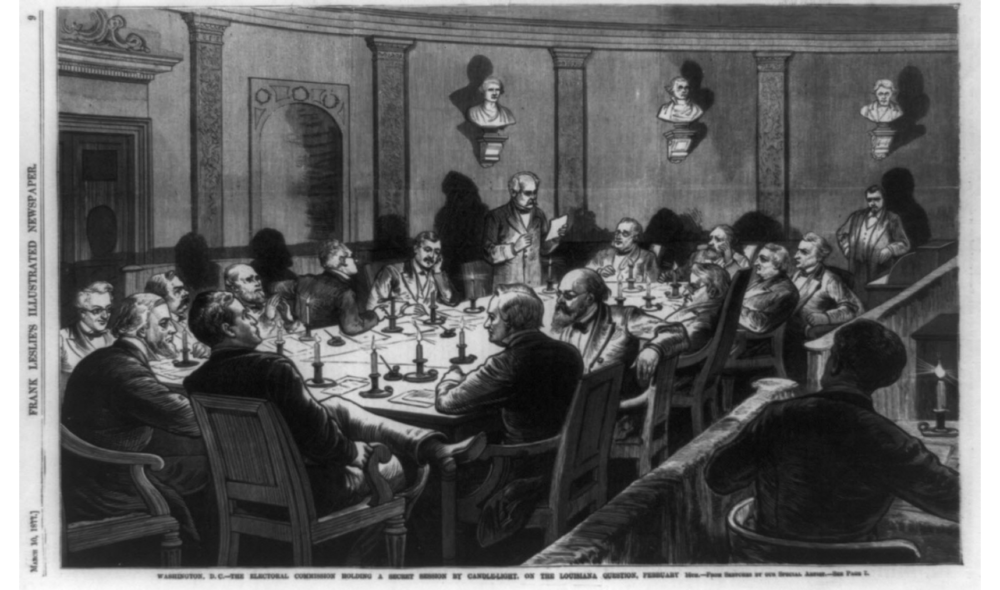 The Electoral Commission comprised of House Members, Senators, and Supreme Court Justices investigated the disputed results after the 1876 presidential election.

Advocates of American democracy also oppose the Electoral College because it over-represents states with small populations due to the allocation of two electors to each state regardless of size. This makes it possible to win by amassing an Electoral College majority that emanates from a group of states who collectively represent less than a majority of the U.S. population.

Doing the math based on the current Electoral College makeup and 2018 population statistics, an average of 736,011 people get one electoral vote in the three most populous states (California, Texas and Florida) and an average of only 211.534 people get one electoral vote in the three states with the smallest population (Alaska, Vermont and Wyoming). This is a ratio of over 3 to 1, based on the size and makeup of the Electoral College for 2020, in place since 2012. Thus, citizens’ Presidential voting power is not equally distributed but depends on which state they reside in.

Supporters of the Electoral College defend it because it gives small states a voice, but critics say that people should be represented in a democracy, not political jurisdictions.

The Electoral College is unpopular with a majority of U.S. citizens. A 2018 scientific opinion poll conducted by the Public Religion Research Institute indicated that 65% of Americans prefer direct election of the Chief Executive and Vice President to the Electoral College. Other polls concur.

Critics of the Electoral College have advocated many ways to fix its problems in recent history, ranging from modest reforms to outright abolition. Despite persistent public disapproval of the college, its defenders have prevailed in the face of lively Congressional and public debates.

The most sweeping of proposed reforms attack the problem at the federal level by simply abolishing the Electoral College and electing the President and Vice President by direct vote of the people. Doing this requires a constitutional amendment which has proven to be a high hurdle since all Congressional proposals to enact such an amendment have failed to date and many of the states with small populations would not ratify it.

Short of abolition, it is possible to ameliorate many of the problems of the Electoral College by attacking them on a state level. One proposed reform is to allocate the electoral votes for each state proportionally, as Nebraska and Maine already do. If ticket A gets 60% of the vote in a given state, that state would give 60% of its electoral votes to that ticket and 40% to the other ticket(s). Accomplishing it would require individual state mandates.

Proponents suggest it would solve the non-democratic aspect of Presidential elections, although the smaller states would still have magnified influence due to the makeup of the College. Opponents say the present system works well and that in a republic like ours, democratic reforms are inappropriate. Prospects for all of the remaining 48 states mandating such proportionality are dim.

A similar reform proposal that has originated in the states is the National Popular Vote Interstate Compact. It is an existing agreement among some U.S. states and the District of Columbia to award all of each state’s electoral votes to the presidential candidate who wins the national popular vote.

Proponents say this would solve the potential problem with a non-democratic vote, ensuring the winner of the vote by the people would be elected. It would go into effect when sufficient states with enough population ratify it to guarantee a majoritarian outcome. As of September 2018, it has been adopted by eleven states and the District of Columbia ((CA, CT, DC, HI, IL, MA, MD, NJ, NY, RI, VT, WA). who have 172 collective votes, which is 63.7% of the electoral votes needed to give the compact legal force. Of all the reforms proposed, has the best prospects for success, although its implementation is far from certain.

Video: A Brief History of the Electoral College

From the History Channel:

Latest Map In Your Inbox