From Wikipedia, the free encyclopedia
Jump to: navigation, search

The usage share of web browsers is the proportion, often expressed as a percentage, of visitors to a group of web sites that use a particular web browser.

Measuring browser usage in the number of requests (page hits) made by each user agent can be misleading.

Not all requests are generated by a user, as a user agent can make requests at regular time intervals without user input. In this case, the user's activity might be overestimated. Some examples:

It is also possible to underestimate the usage share by using the number of requests, for example:

Websites often include code to detect browser version to adjust the page design sent according to the user agent string received. This may mean that less-popular browsers are not sent complex content (even though they might be able to deal with it correctly) or, in extreme cases, refused all content.[10] Thus, various browsers have a feature to cloak or spoof their identification to force certain server-side content.

Net Applications, in their NetMarketShare report, uses unique visitors to measure web usage.[12] The effect is that users visiting a site ten times will only be counted once by these sources, while they are counted ten times by statistics companies that measure page hits.

Net Applications uses country-level weighting as well.[13] The goal of weighting countries based on their usage is to mitigate selection area based sampling bias. This bias is caused by the differences in the percentage of tracked hits in the sample, and the percentage of global usage tracked by third party sources. This difference is caused by the heavier levels of market usage.[14]

Statistics from the United States government's Digital Analytics Program (DAP) clearly do not represent world-wide usage patterns, although at least one expert considers it the most reliable US data source.[15] DAP uses raw data from a unified Google Analytics account.

According to StatCounter, as of January 2016[update], Chrome is the most popular browser on phones (or phones plus tablets).[16] For tablet only browsing, Safari on iPad has 58.8% share,[17] followed by Chrome, which inherited its engine and web standard support; Safari is not available for Android. When counting across all platforms, Chrome is the most popular, and if only desktop platforms are counted, it has more than half of that market.[18] No desktop browser has had a clear majority for a more than a decade, since Internet Explorer lost it, with Netscape once holding the lead before that. Other statistics/analysts show similar numbers.

The following tables summarize the usage share of all browsers for the indicated months. All Apple Inc.'s platforms use the Safari browser, including macOS and iOS systems with the WebKit engine. Therefore, for the "all browsers" stats, Safari's percentage is counting all these users.[19]

In the tables below "Android" stands for older "Android browser" that was built in, while Chrome is often the default browser on newer Android mobile devices (other browsers can also be used, and conversely a version of Chrome is available for Apple platforms).

Crossover to smartphones having majority share[edit]

According to StatCounter web use statistics (a proxy for all use), in the week from 7–13 November 2016, "mobile" (meaning smartphones) alone (without tablets) overtook desktop for the first time and by the end of the year smartphones were majority. Since 27 October, the desktop hasn't shown a majority, even on weekdays.

Previously according to StatCounter press release, the world has turned into a desktop-minority;[26] as of October 2016[update], there was about 49% of desktop usage for that month. The two biggest continents, Asia and Africa, have been a mobile-majority for a while. A few countries in Europe and South America have also followed this trend of being mobile-majority.

StatCounter statistics are directly derived from hits (not unique visitors) from 3 million sites using StatCounter totaling more than 15 billion hits per month.[28] No weightings are used.

This site counts the last 15,000 page views from each of approximately 80,000 websites. This limits the influence of sites with more than 15,000 monthly visitors on the usage statistics. W3Counter is not affiliated with the World Wide Web Consortium (W3C).

Wikimedia traffic analysis reports are based on server logs of about 4 billion page requests per month, based on the user agent information that accompanied the requests.[29] These server logs cover requests to all the Wikimedia Foundation projects, including Wikipedia, Wikimedia Commons, Wiktionary, Wikibooks, Wikiquote, Wikisource, Wikinews, Wikiversity and others.[30]

AT Internet Institute was formerly known as XiTi.

TheCounter.com identifies sixteen versions of six browsers (Internet Explorer, Firefox, Safari, Opera, Netscape, and Konqueror). Other browsers are categorised as either "Netscape compatible" (including Google Chrome, which may also be categorized as "Safari" because of its "Webkit" subtag) or "unknown". Internet Explorer 8 is identified as Internet Explorer 7. Monthly data includes all hits from 2008-02-01 until the end of the month concerned. More than the exact browser type, this data identifies the underlying rendering engine used by various browsers, and the table below aggregates them in the same column.

Reports from before year 2000[edit] 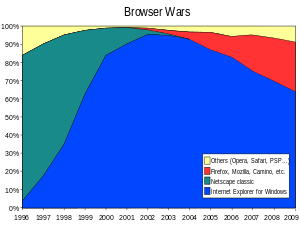 Market share for several browsers between 1995 and 2010, illustrating the First Browser War (NN vs IE). Firefox was originally named "Phoenix", a name which implied that it would rise like a Phoenix after Netscape was killed off by Microsoft.