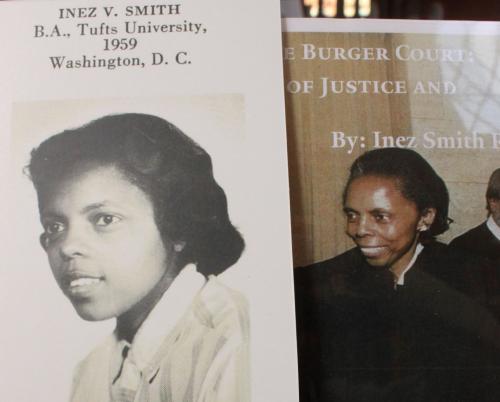 Currently on display in the Lillian Goldman Law Library’s Reading Room is our second installation in our series, “A Celebration of Women at Yale Law School,” showcasing the life and career of the Honorable Inez Smith Reid ’62.

Born in New Orleans and raised in segregated Washington, D.C., Smith Reid received a B.A. from Tufts University in 1959 and an LL.B. from Yale Law School in 1962, where she and her twin brother (the Honorable George Bundy Smith) were the only African American students in their class. Due to limited career opportunities, Smith Reid pursued an M.A. in political science from UCLA, awarded in 1963, and a Ph.D. from Columbia in 1968.

Judge Smith Reid enjoyed an illustrious career spanning many decades holding a plethora of teaching appointments and legal positions. In 1979, President Jimmy Carter appointed her as the inaugural Inspector General of the Environmental Protection Agency. In 1995, Judge Smith Reid was nominated by President Bill Clinton as an associate judge on the D.C. Court of Appeals – the highest court for the District of Columbia.

The Honorable Inez Smith Reid retired from the D.C. Court of Appeals on December 12, 2017, after serving six years as senior judge. To this day, she continues to mentor law students.

The exhibit was curated by Shana Jackson and Jordan Jefferson, and will be on display through April 2019.