The New York Times has a pretty prominent article today called Blogs Wane as the Young Drift to Sites Like Twitter. The title was probably written by an editor, not the author, because as soon as the article gets past the two token teenagers who tumble and Facebook instead of blogging, the stats show all the major blogging services growing — even Blogger whose global “unique visitors rose 9 percent, to 323 million,” meaning it grew about 6 Foursquares last year alone. (In the same timeframe WordPress.com grew about 80 million uniques according to Quantcast.)

Blogging has legs — it’s been growing now for more than a decade, but it’s not a “new thing” anymore. Underneath the data in the article there’s an interesting super-trend that the Times misses: people of all ages are becoming more and more comfortable publishing online. If you’re reading this blog you probably know the thrill of posting and getting feedback is addictive, and once you have a taste of that it’s hard to go back. You rode a bike before you drove a car, and both opened up your horizons in a way you hadn’t imagined before. That’s why blogging just won’t quit no matter how many times it’s declared dead.

Blogging (with WordPress) is the natural evolution of the lighter publishing methods — at some point you’ll have more to say than fits in 140 characters, is too important to put in Facebook’s generic chrome, or you’ve matured to the point you want more flexibility and control around your words and ideas. (As The Daily What did in their recent switch from Tumblr to WordPress.) You don’t stop using the lighter method, you just complement it — different mediums afford different messages.

Scott Berkun writes a delightful essay on How is WordPress.com made?.   ∞

Adam Gopnik writes How the Internet Gets Inside Us. “[This complaint] is identical to Baudelaire’s perception about modern Paris in 1855, or Walter Benjamin’s about Berlin in 1930, or Marshall McLuhan’s in the face of three-channel television (and Canadian television, at that) in 1965.” Hat tip: John Battelle’s Signal.   ∞

WordCamp Indonesia proudly presents the first WordPress Board Game. I gotta try this.   ∞

Over on ThemeShaper I share Premium Themes on WP.com, the backstory, which also links to all of the coverage from our announcement today.   ∞

Update from Cairo: March of a Million.   ∞

Scoble muses on “Why I was wrong about Quora as a blogging service”.   ∞

Z-Type is a game that helps you practice typing. Fantastic to play when you’re switching to Dvorak. Hat tip: Lloyd.   ∞

I was on the Steppin’ Off the Edge podcast the other day and mentioned I don’t have a Wikiquotes page. Well, now I do. If I’ve ever said something you enjoyed or inspired you, drop it on that page.   ∞

Some good news today, TripIt is joining up with Concur. I’m excited about this because I travel all the time and I’m curious to see the TripIt approach and team working in the space with a larger team and more resources.

Today is a fun day — 2011-1-11 (not 1:11 PM anymore, I’m a slow writer) and I’m turning 27. This is the time of the year I always look back, and from last year’s resolutions I actually did pretty well. I was able to simplify a number of areas of my life, including reducing the number of computers running in my place. I bought my first apartment and remodeled it. I slowed down my eating by chewing more, a vignette that made Tim’s new Four Hour Body book. Redesigned this site. I didn’t bike at all, but walked a ton. I started exercising with a kettlebell over the summer and was pretty consistent about it until last month, with some noticeable improvements in strength and energy. Got all the old photo galleries imported going all the way to 2002.

I petered out on Farscape, and didn’t display my photography anywhere in print, so a wash there. I spent a week in the woods with Beau at Tracker camp. I joined the board of the non-profit Grist, and was able to expand charitable donations to cover more organizations than previously, including Charity: Water, FSF, Apache, Archive.org, Samasource, EFF, and GAFFTA. I had a tweet go viral and end up on Time and CBS (I still need to blog about that), and a blog post about shipping go viral and get over a hundred thousand visitors. (With an interesting traffic pattern too — lots of Twitter and Facebook like you would expect, but 92% of the traffic from the long tail or blogs like Daring Fireball.)

Speaking of launches, was lucky to hit all the big ones I had planned in the beginning of the year in that abbreviation-coded list: VaultPress, new Akismet, mobile WordPress apps for every platform, Ma.tt themes, Audrey Capital, WordPress Foundation. Also hired 28 new Automatticians, added 7.2 million blogs to WP.com, and had 38 million downloads from WordPress.org.

This year, along lines of simplifying, I have six main goals:

According to TripIt, which I love and use constantly, I was on the road 227 days out of the year, traveling 122,066 miles across 59 cities and 17 countries.

27 is a really awkward age — I’m not young anymore but still before the looming 30. It’s inbetween. That said, I think 2011 is going to be a year where a lot of things come together and a lot of the foundations laid down in 2010 (and when I was 26) come to fruition.

Rich Brooks on Fast Company asks What’s the Best Blog Platform?. That’s an easy one to answer. There’s still some disagreement over “What’s the best CMS?” but we’re trying to make that one easy to answer, too.   ∞

The interview I did with Robert Scoble at Big Omaha is now up. Here’s the embed:

Open Source Fact and Fiction: Open Source CMS Dominate the Market, Who Are The Leaders?   ∞ 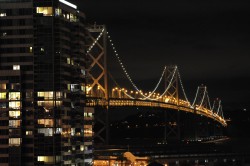 Nighttime pictures of the Bay Bridge and a few attempted shots of the full lunar eclipse on the winter solstice.

Today has been a very exciting day. First off, About.me has been acquired by Aol, as good friend Tony Conrad writes about on his blog. A great deal on both sides, I think Aol got a steal and a great team here. Second, one of Audrey’s earliest investments Wakemate has finally shipped their first version, which I’ve been using the past two nights and has been great. (I’m averaging 60 so far.) Reserve your Wakemate here.   ∞

40% of the tasks in Mechanical Turk are getting people to spam. Amazon should take a hard stance against these, as soon as possible.   ∞

The first data set they analyzed was on the economic productivity of American cities, and it quickly became clear that their working hypothesis — like elephants, cities become more efficient as they get bigger — was profoundly incomplete. According to the data, whenever a city doubles in size, every measure of economic activity, from construction spending to the amount of bank deposits, increases by approximately 15 percent per capita.

A Physicist Turns the City Into an Equation on NYTimes.com. A fascinating article about some constants between cities, and a bit at the end about how laws are different for corporations.   ∞

I’ve been really enjoying the new features in Akismet: