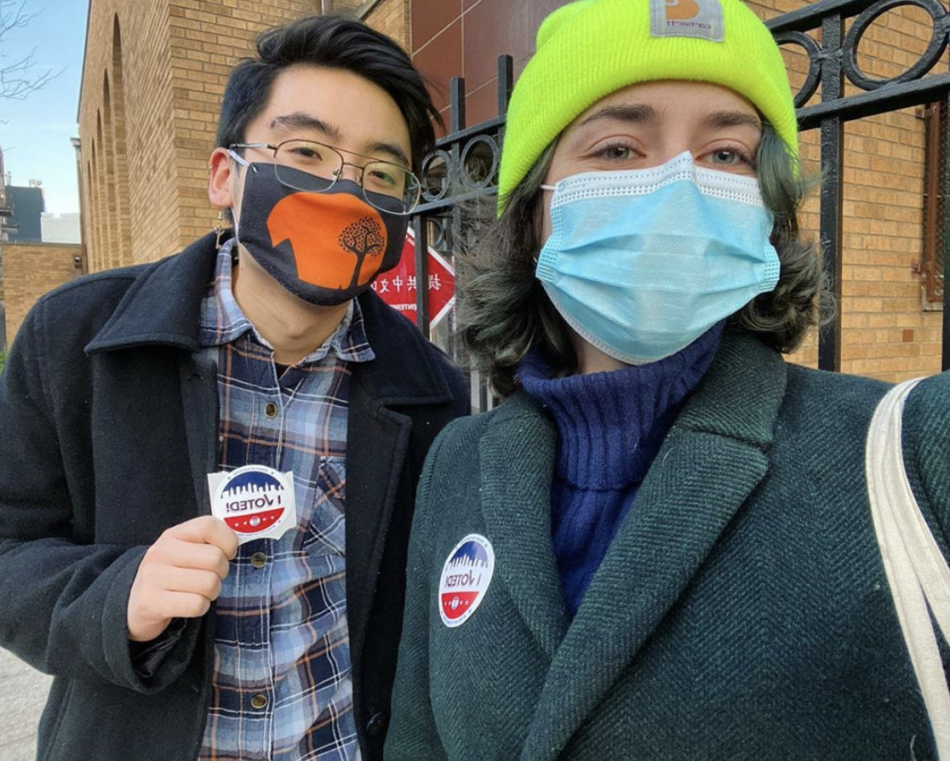 Sylvie Nelsonand her roommate woke up at 5:45am to be early at the polls in Williamsburg, Brooklyn

Sylvie Nelson is an NYU student who dropped everything to fly from Colorado to New York just to vote in the 2020 Presidential Election.

A political activist in the community, Nelson encourages young people to vote, specifically in this election, saying that their votes do matter.

“I voted because I am a queer Jewish woman, three minorities that are right now being oppressed,” she said. “With Black Lives Matter and the Supreme Court and Amy Coney Barrett, it’s important now more than ever.”

Nelson hasn’t gotten her hopes up that Joe Biden will win after the initial shock she experienced when Hillary Clinton lost in 2016.

“I remember in my community going to school the day after the results and everyone just sitting and crying, ‘cause where I was raised, I knew maybe two people who voted for Trump,” she said. “Everyone thought Hillary was gonna win.”

When Trump won, she said his presidency has proved to be much worse than what she expected.

“When it happened, it was apocalyptic almost, she said. “However bad we thought the administration could be, it’s been worse.”

While Nelson doesn’t agree with most of Biden’s policies, she supports him because he is being rallied behind by people that she does support.

“AOC is on his task team to try to come to a compromise, so that’s a start in getting back to a country that we can all feel safe in and that’s actually accepting of all people and all religions,” she said.

She said she feels personally affected by the rhetoric Trump encourages as a Jewish woman. So it was worth the trek  back to her Brooklyn home although she was taking online classes out west.

But Nelson’s biggest fear is that she will have to keep feeling unsafe in this version of America; that we will have to keep living with the coronavirus and that historical Supreme Court decisions, such as Roe V. Wade, will be overturned if Trump wins.

“I think ultimately my hope is that Joe Biden wins,” she said. “I don’t know if this is gonna happen.”

But she also hopes for a peaceful transfer of power and Biden to be able to start working on reversing what she said is the damage that Trump has done.

“We can start to work on a vaccine and work towards climate change and all these things that Trump has put into place and work on overturning them,” she said.