River Knight says he lives at One Central Park, but it’s real name is The Trump International Hotel and Tower.

“I feel decently awful about it,” Knight, a 19-year-old NYU student, said. “I have a little bit of comfort knowing that the residential part of the tower he doesn’t own anymore. It is definitely icky. Something that made me wonder if coming back to New York was worth it at all.” 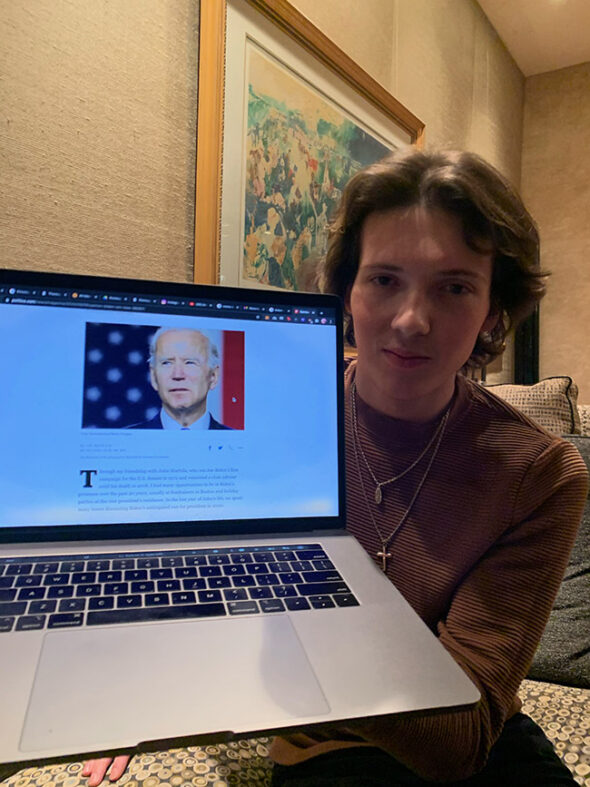 Knight, who lives in an apartment owned by his grandmother, casted his vote for Joe Biden which he mailed to Salt Lake City, Utah, his hometown.

“I read somewhere that if you sent it after October 20 who knew whether or not it was gonna make it,” said Knight. “I just got confirmation this past Friday that it was counted.”

Utah is historically a red voting state, but Utah Senator Mitt Romney has recently confirmed that he himself had not voted for Trump.

“I think there’s a chance that Utah could go not fully blue but purple or pink,” Knight said. There is a semblance of a chance that Trump will not get the majority of our electors and that’s because Romney didn’t vote for Trump and the Mormons like Romney,” said Knight.

Knight hailed from a suburb just outside of Salt Lake City Utah, approximately 9400 blocks south from the Mormon Temple. All of Salt Lake’s streets are labelled by their distance from the temple. Whether or not Utah votes semi-blue, Knight believes Biden will win the election.

“I think Joe Biden will win. God, knock on wood though,” said Knight. “Trump is an evil, lying, disgusting human being. Biden has run his political campaign on the side of decency, and will be on the right side of history in a way Trump could never be.”

This is the first election Knight will be voting in along with many others, with predictions of the highest youth voter turnout since 1984, according to the Harvard Gazette. He is a registered independent and so did not vote in the primary elections this year.

“I’m voting for Biden cause I don’t think he’s evil. I think he’s rational and would be more of a ‘man of the people,’” said Knight. “And everyone my age I know is voting. Not all of them are voting for Biden, but a good amount are.”

Knight plans to watch the election inside of his apartment in the Trump International. He said he believes civil unrest will come in the weeks after the election, not the night of. Some news sources predict that because of mail-in voting, the election will not be over on election day, and that the results may take several days.