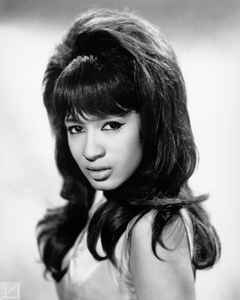 Real Name:
Veronica Yvette Bennett
Profile:
Ronnie Spector was born as Veronica Yvette Bennett 12 August 1943 in Manhattan, New York City, USA. In 1957 she formed the girl group The Ronettes with her elder sister Estelle Bennett and cousin Nedra Talley. Bennett fronted the group while record producer Phil Spector produced the majority of their recording output. The two were married in 1968 and separated in 1972, though she continued using Spector as a stage name for herself. In 1982, Spector married her manager Jonathan Greenfield. They lived in Danbury, Connecticut with their two sons, Austin Drew and Jason Charles. Spector died from cancer on January 12, 2022, at the age of 78

Bennett was sometimes referred to as the original "bad girl of rock and roll". In 2007, she was inducted into the Rock and Roll Hall of Fame as a member of the Ronettes.
Sites:
ronniespector.com, MySpace, Wikipedia, imdb.com
Aliases:
Veronica Bennett
Variations:
Viewing All | Ronnie Spector
R. Spector, ロニー・スベクター, Ronnie, Veronica
[a293153]

Rest... In... Peace... by crimsonmetal74
Artists performing under a pseudonym, stage name or nickname (a name other than their real or birth name) by Sacstracks
Female-Fronted S/S by Donut_Duck
Top 120 Favourite Live Acts of All Time by BAHAMABOY
females singers 80'S by paul62300fr
“VH1’s Top 100 Women Of Rock ‘n’ Roll” by crimsonmetal74
View More Lists →