“I haven’t the slightest idea,” said the Hatter. 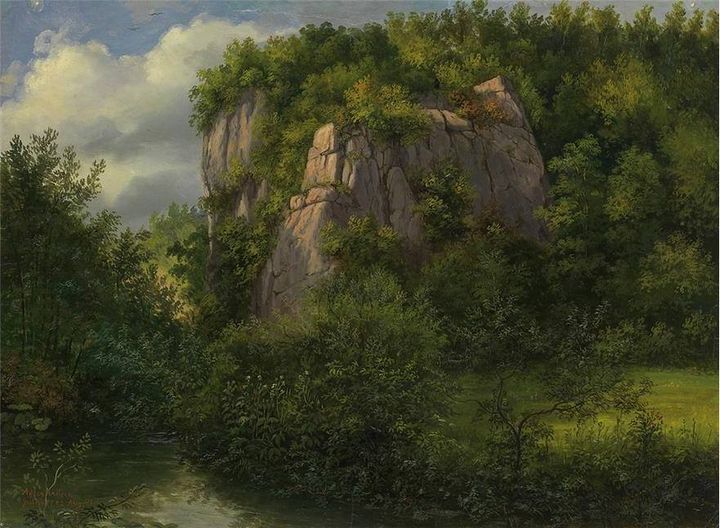 In the 16th century, with the rise of humanism and the rediscovery of classical culture, scholars in Germany began to translate their surnames into Latin or Greek. As one scholar (Eckhard Bernstein) puts it:

The need to set themselves off from the profanum vulgus showed itself most clearly in the Latinization, and to a lesser degree Grecization, of proper names for it signified an initiation into an exclusive European community of scholars. And just as a novice often adopted a different name upon entering a monastery to mark the importance of his or her decision, so the humanists assumed a new name to celebrate their entrance into the lay order. ["Group Identity Formation in the German Renaissance Humanists: The function of Latin"]

Thus Luther's friend and collaborator Philipp Schwartzerdt (which he interpreted as meaning "black-earth") Greeked his name to Melanchthon. Georg Bauer ("farmer"), the naturalist, became Georgius Agricola; the pencil-making family that had been Schmidt ("smith") became Faber; and the map-maker Gerhard Kremer ("shopkeeper") signed his maps Mercator.

An intellectual named Neumann (just what it sounds like in English, "new man") turned the name to Greek as Neander. It stuck, and his grandson was Joachim Neander, who, after an idle youth, found religion and discovered a talent for hymn-writing.

He was the "sweet singer" of the Reformed church, and while working as rector of the Latin school at Düsseldorf in the 1670s he was inspired by the lovely, steep, rocky valley of the little river Düssel east of the city. Some of his hymns were said to have been composed in one of the limestone caves along the valley (shown in the painting).

Church music doesn't make much of a show on the pop charts nowadays, but once upon a time hymns were cherished things of beauty, and the best were embraced across the map of Protestant sects. Neander's were among them.

After his early death in 1680 and the rise of his fame and life story, the locals began to give his name to the river gorge — Neanderthal, with German tal or thal, meaning "valley," a cognate of English dale.

Regrettably for natural beauty and Neander's memory, the limestone in the valley was commercially valuable, and in the 19th century miners hacked away at it, penetrating and destroying the caves and the scenery.

In August 1856 a landowner in the valley found bones and bone fragments in the pile of detritus after Italian workers had dug out one of the old caves for the limestone. He thought they were remains of cave-bears and gave them to a local teacher and fossil collector, but someone soon recognized them as human remains, and unlike anything then living.

The rest of the story is well-known. By the 1860s the new man identified by the fossils was named Neanderthal. Eventually he took his place in the extended human family — modern man's nearest dead cousin, adapted to life in Europe and western Asia during the depths of the last great Ice Age, extinct from about 40,000 years ago.

Like us, a tool-maker and fire-user, a skilled hunter and maker of clothes and objects that must have had symbolic or ornamental purpose. Perhaps he sang. That they interbred with modern humans was long debated and denied, but DNA analysis settled the question in 2013: They did.

That German word tal or thal also is, via another valley on the far side of the German map, the source of our dollar, the name of the monetary unit or standard of value in the U.S. and Canada.

It came to English in the 1550s as daler, and it was then the name of a large, silver coin of varying value in the German states. The word itself is from Low German daler, from German taler (1530s, later thaler), an abbreviation of Joachimstaler, literally "(gulden) of the valley of Joachim."

That was the name of a coin minted by 1519 from the silver from a mine opened in 1516 near Sankt Joachimsthal, a town in the Erzgebirge Mountains in northwest Bohemia. (The German given name is from Old Testament Hebrew, but seems not to have been used by the English; it is, however, cognate with Spanish Joaquín.) The English spelling had been modified to dollar by 1600.

The thaler was from 17c. the more-or-less standardized coin of northern Germany (as opposed to the southern gulden). It also served as a currency unit in Denmark and Sweden (and later was a unit of the German monetary union of 1857-73 equal to three marks).

English colonists in America used the word dollar from 1580s in reference to the Spanish peso or "piece of eight," also a large silver coin of about the same fineness as the thaler. Due to extensive trade with the Spanish Indies and the proximity of Spanish colonies along the Gulf Coast, the Spanish dollar probably was the coin most familiar to the American colonists and the closest thing to a standard in all of them.

When the Revolution came, the dollar had the added advantage of not being British. It was used in the revolutionary government's records of public debt and expenditures, and the Continental Congress in 1786 adopted dollar as a unit when it set up the modern U.S. currency system, which was based on the suggestion of Gouverneur Morris (1782) as modified by Thomas Jefferson.