Mike McCarley serves as President, Golf for NBC Sports Group, and has been at the helm of Golf Channel since February 2011. He oversees all of NBC Sports Group’s golf-related businesses and content, including Golf Channel, broadcast golf coverage on NBC, Golf Channel Digital, GolfNow, and the company’s portfolio of golf lifestyle brands.

Providing more live tournament golf coverage than all other U.S. television networks combined, NBC Sports Group's Golf Channel in 2016 matched its highest-rated year ever for the third consecutive year, according to data released by The Nielsen Company. Since McCarley’s tenure began as president in 2011 when the network became part of the NBC Sports Group, Golf Channel has scored its six best years ever and has increased ratings +60% and viewership +53% over that span through 2016 and the network has grown to become the No. 1 most-affluent ad-supported television network in both total day and primetime for three consecutive years.

Golf Channel is home to the PGA TOUR, The R&A, LPGA Tour, European Tour, Web.com Tour, PGA TOUR Champions, IOC/Olympics, NCAA National Championships, as well as other worldwide tours. Golf Channel’s and NBC’s slate of marquee men’s events include, The Open, The Players, Olympics, FedExCup Playoffs, Ryder Cup & Presidents Cup. Beginning in 2016, NBC Sports Group became the home for four of the five women’s and senior major championships, in addition to previously being the home of the Solheim Cup and International Crown.

Under McCarley’s leadership, Golf Channel has expanded its high-quality programming slate and increased viewership across all dayparts. Additionally, McCarley played a key role in NBC Sports Group’s television rights negotiations with the PGA TOUR, resulting in NBC extending its partnership and expanded Golf Channel opportunities through 2021; the PGA of America, which included signing the longest partnership in professional sports with NBC Sports gaining the rights to the Ryder Cup through 2030; and the R&A, with NBC Sports assuming the rights to The Open, The Senior Open, and the Women’s British Open, among other events. The partnership with the R&A marks Golf Channel’s first-time ever airing live coverage of a men’s major championship with their critically acclaimed coverage of The Open in 2016.

Prior to his current role overseeing golf for the NBC Sports Group, McCarley served as Senior Vice President, Communications, Marketing and Promotions, NBC Sports & Olympics since August 2008. He created the award-winning “Sunday Night is Football Night” campaign and was the architect of NBC Sports’ highly successful “Big Event Strategy,” which marshals all NBCUniversal assets to make the audiences for the biggest events in sports even bigger.

McCarley, an Emmy Award-winner, helped set two Guinness World Records and has won multiple ProMax Awards for Olympic and NFL campaigns. He joined NBC in February 2000 as the Communications Director for NBC’s Olympic division; was promoted to Director, Marketing and Communications in 2003; was promoted to Vice President in 2004; and in 2006 added oversight of all NBC Sports Advertising and Promotions. Prior to NBC, McCarley worked with USA Triathlon in association with the U.S. Olympic Committee, the Dallas Mavericks and the University of Arizona.

A native of Memphis, Tenn., and graduate of the University of Arizona, McCarley resides in the Orlando area with his wife and four children. 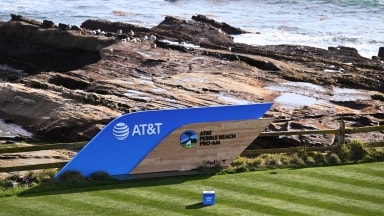 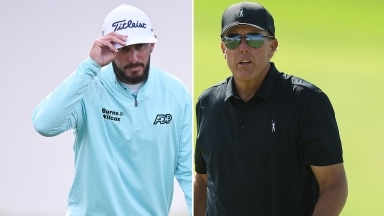 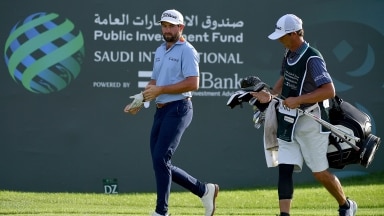 Young one back; Phil, Bryson MC at Saudi Intn'l