Skip to main content
More
MusicRadar is supported by its audience. When you purchase through links on our site, we may earn an affiliate commission. Learn more
(Image credit: Daniel Knighton / Getty)

Listening to the two latest high-profile releases that feature the bass playing of Ricky Phillips, one thing becomes immediately apparent: together, they represent a testament to his versatility.

Whether he’s blazing trails through the 70s-inspired prog rock concept album that is Styx’s 2017 release The Mission, or laying down thunderous grooves on the equally retro, guitar-driven riff rock of Ronnie Montrose’s 10X10, Phillips is clearly comfortable navigating both musical realms. And while his tone may change between the two projects, the style is clearly, and uniquely, all his own.

As a matter of fact, before he even cut a note, or wrote a part, for The Mission, Styx lead singer and guitarist Tommy Shaw pulled him aside. Phillips recalls, “He said to me on multiple occasions, ‘I want Ricky Phillips on this record. I don’t want you to hold back. I want to hear the guy I hear warming up before we go on stage every night. I want to hear that Ricky Phillips all over this record’. The handcuffs were off. I had free rein to do what Chris Squire was probably able to do.”

On The Mission, the Austin, Texas-resident bassist channels the influences of his youth, such as Squire, through the lens of his own vast experiences and translates them into dynamic performances that help shape the character of each song.

“Paul McCartney, at a certain point, would sit with his producer George Martin and the bass would be the last thing on the record. He would play percussively, rhythmically, melodically – whatever was necessary to complete the song and make it more interesting,” explains Phillips.

“Instead of playing the root, he played against it. As a kid, I learned a lot from that, and it has been hiding in there just waiting to jump out. Tommy wrote such killer music, with so much room for me to create melodies underneath the guitars. It was a blast.”

Phillips first gained fame in 1978, when he joined British rock group the Babys and performed on the now-classic Union Jacks record that year. In 1987, he and Babys lead singer John Waite formed Bad English with Journey members Neal Schon (guitar) and Jonathan Cain (keyboards). Together they achieved major worldwide success with the number one hit single, When I See You Smile, from their eponymous debut album.

He joined Styx in 2003 after a stint touring and recording with Montrose. The untimely death of the Bay Area guitarist in 2012 left the project they were working on, 10X10, in limbo for several years, but Phillips, along with Kiss drummer Eric Singer, his co-conspirator on the posthumous project, decided to honour the guitar great’s legacy by completing the record that they started in 2003. 10X10 features 10 songs with guest appearances by 10 different lead singers (hence the title), including Eric Martin (Mr. Big), Glenn Hughes (Deep Purple) and Sammy Hagar, among many others.

Several guest guitarists, including Joe Bonamassa, Brad Whitford (Aerosmith) and Steve Lukather (Toto), were brought in to complete guitar solos on the record after Montrose died. The Mission is Styx’s first full-length studio effort of original material to feature Phillips on bass. Because 10X10 had such a long gestation period, the recording of the records overlapped. For both, Phillips relied heavily on his beloved 1968 Fender Telecaster basses.

“I recorded the Babys’ Union Jacks record with a 1968 Tele,” he recalls. “And when I pulled that out with Ronnie and plugged it into my Ampeg SVT, and just let it rip, he said, ‘That’s it! Put all of those other basses away.’ He loved that tone with his stuff’. There are a few songs on the Montrose album that are full-bore, prime examples, where you can really hear the veracity of Phillips’ tone. One of them would be The Kingdom’s Come Undone, which he opens with a jangly tone. “I’m playing with a pick to get a really edgy tone: it’s reckless,” he admits.

Similarly, for The Mission, Phillips says that Tommy Shaw didn’t want him to play any of his active five-string basses, which is what he mostly uses on tour.

“He wanted me to play all of my vintage gear,” he says. “So, I brought an arsenal of '50s and '60s basses to Nashville, where we recorded at Blackbird Studios with longtime collaborator Will Evankovich, and that’s all I used. I forgot how hard it is to play some of those instruments. The instruments of today have nice smooth, slick necks, whereas on some of those older instruments, you have to work for. I think ‘Locomotive’ is one of those songs where I was kind of fighting for it a bit.”

Tone is in the fingers

“My hands are small, and I have small fingers, so I’ve always had to struggle,” he admits. “But it’s okay, because it’s probably part of my style: me going after it. I have to pull certain things out, whether I play with my fingers or a pick, to make tones happen a certain way. I’ve used felt picks, just to get a sound, or the edge of the pick to scrape. I’ve even grown my fingernails so I can pluck and get different tones. It’s all part of the process.”

As for the actual tracking of his bass parts, Phillips reveals that the two albums couldn’t have been more opposite. Montrose, he says, was heavy-handed in tracking.

“Ronnie didn’t want to do second takes, unless we had to,” he says. “Everything you hear is one or two takes. We knew the songs and we rehearsed some ideas and parts, but there are a few things that were created in the studio, and only ever really played once.”

Phillips says there were a few times when he second- guessed his performance on a track, but with Montrose, there were no do-overs.

“There were a couple of times when I thought, ‘Oh man, I should’ve played something else,’ but Ronnie would say, ‘Nope, that’s it. We’re moving on. That’s what you did this time and the magic is there with the three of us. We’re done’. I love that. The vibe of laying the track down, breathing at the same time and ebbing and flowing while the drummer is, it’s huge magic. Ronnie used to say that if there’s a power trio at the basis of any record, the record will be great.”

One of the highlights of The Mission is Phillips’ tone, particularly on tunes like opening number Overture. It seems as though he took a page right out of the Chris Squire playbook.

“I think that, without ever intending to emulate any of my heroes, it just comes out: it’s part of my palette. There are a bunch of colours splashed in there and when you’re in the studio and the red light goes on and you hit record, whatever comes out, even if they’re pre-written parts, you still augment and change it in the moment. John Waite used to call it ‘walking the beast’. I just let the beast go and lead me!” 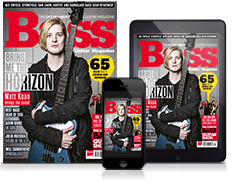 We're the UK's only print publication devoted to bass guitar.
Subscribe for star interviews, essential gear reviews and killer tuition!
More Info
The best of MusicRadar in your inbox

Thank you for signing up to Musicradar. You will receive a verification email shortly.

There was a problem. Please refresh the page and try again.