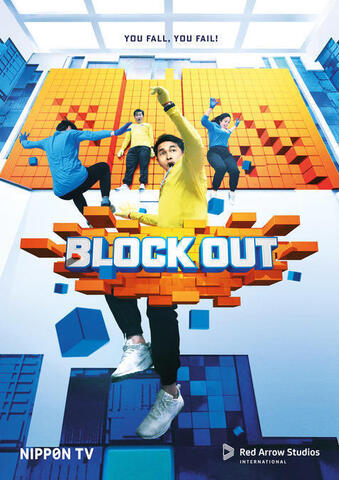 Based on “Block Out” developed and distributed by NIPPON TV in association with Red Arrow Studios.

The entertaining new physical gameshow that challenges contestants to stay on the wall – or have a great fall!

In this fun and hilarious format, two teams of four players - each with their backs literally against a wall - battle it out in a variety of physical games, combining trivia, strategy, and chance.

The teams' identical walls comprise more than 100 giant blocks. Across several nail-biting games, wrong answers and bad judgments see blocks push out in a variety of combinations and speeds, forcing contestants into crazy positions to try and avoid being knocked into the pit below. The team who keeps the most players on the ledge for the longest, wins the game.

The final sees both teams stand on their ledges above the pit. However, the leading team's ledge is bigger. Incorrect answers make the entire wall creep forward, pushing contestants to the edge - and over it. As soon as one team has disappeared, the other is declared the winner and takes the big cash prize!