This article is part of a regular series of conversations with the Review’s contributors; read past ones here and sign up for our email newsletter to get them delivered to your inbox each week.

“There are moments in The Tragedy of Macbeth when Shakespeare and the Coens feel in perfect alignment,” writes James Shapiro in “Shakespeare Noir,” his review of Joel Coen’s new film from our January 13 issue. The essay examines the history of filmed adaptations of Macbeth, and how each responded to the play and to its own time, from Orson Welles’s antifascist take—made as the House Un-American Activities Committee persecuted Communists real and imagined—to Roman Polanski’s bloody, barbaric 1971 interpretation, made not long after his wife was murdered by the Manson family. Coen’s Macbeth, Shapiro finds, takes the tropes of film noir and a rich black-and-white style to “signal that between Malcolm’s coronation and Fleance’s—and long after—there will be more violence, more horrors, more pointless and destructive conflict.”

Shapiro, a professor of English at Columbia University, is the author of six books (and four essays in the Review) about William Shakespeare, has edited a Shakespeare anthology for the Library of America and produced a documentary about Shakespeare for the BBC, and has been, for about a decade, the Shakespeare scholar in residence at New York’s Public Theater. But his commitment to the playwright was decidedly not love at first sight.

“I hated it,” Shapiro said over e-mail this week of his first encounter with Shakespeare, when he was made to read Romeo and Juliet in ninth grade at his school in Midwood, Brooklyn. “I didn’t even get the dirty bits my classmates laughed at. I swore I would never study Shakespeare again unless forced to do so. And I never did take a Shakespeare course in college (or in graduate school either).”

Shapiro may have been unmoved, but Shakespeare’s prayers soon took their effect: “I fell in love with his plays seeing them performed, starting in the 1970s.” In his early twenties, Shapiro, along with his brother, took advantage of Freddie Laker’s Skytrain, a cheap, no-frills airplane route between New York and London, in order to backpack across Europe:

In London we sought out the cheapest entertainment—plays, at a student discount of fifty pence. It was like a drug. I went back, by myself, every August, after quitting yet another numbing summer job once I had saved up enough for another flight. I’d sleep in youth hostels or church basements, seeing twenty Shakespeare plays in twenty days, and then travel to Stratford-upon-Avon and the Edinburgh Festival when I had exhausted what was showing in London.

After six or seven years I must have seen over 120 productions of his plays; most of them are still tattooed inside my skull. These turned out to be golden years in the theater, before Hollywood or Netflix wooed away so many talented artists, marred only by the failure to give actors and directors of color a chance.

Shapiro took from this experience two lessons. First, “Seeing Shakespeare while young is crucial,” but mere words require matter from the heart: “Having students act out scenes, rather than numbingly working through the plays line-by-line as I was forced to do in ninth grade, is the best way to get young people to love them,” he said. “And not just the very young; I have my Columbia undergraduates act out key moments in the plays in every class.” And second, the play’s the thing:

The truth is that I prefer a bad staged version to a great one on film. Or even a filmed version of a stage production. There have been several of these released during the current epidemic, with theaters so often closed, but despite their excellent production values and often terrific acting, they don’t hold my interest. It has to be live. But I prefer any of these to rereading a play alone in a room.

The energy of live performance notwithstanding, Shapiro nevertheless admires many of the cinematic adaptations of Shakespeare:

I love Franco Zeffirelli’s Romeo and Juliet, especially John McEnery’s unforgettable Mercutio. I became a fencer after seeing him and Michael York, as Tybalt, go at it. Many years later I ran into York and asked him about the scene, and he told me that it was incredibly dangerous—that Zeffirelli took few precautions when filming the swordfight.

For some reason, and I couldn’t tell you why, Shakespeare on film is usually better in another language. Joel Coen’s Macbeth is an exception. Kurosawa’s Throne of Blood and Ran, in Japanese, are both wonderful, as are Vishal Bhardwaj’s versions in Hindi of Macbeth (Maqbool) and his brilliant Hamlet (Haider), set in Kashmir.

I asked Shapiro when he’d become a fan of the Coen brothers, and his answer was that, much like his love for Shakespeare, “I was late to the game. Fargo, in 1996, was my first Coen brothers’ film, and is still my favorite.” As he argued in his review of Joel Coen’s Macbeth, the Coen sensibility in Fargo is very Shakespearean: “Great characters, brilliant plotting, scenes of terrifying violence juxtaposed with those of mundane life, a whole world perfectly brought to life.”

He also singled out a scene from Inside Llewyn Davis, the brothers’ 2013 tale about a folk musician, Llewyn Davis (played by Oscar Isaac), who struggles to achieve success or stability in the music business. In Shapiro’s telling, Davis, after finally getting an audition with a club owner in Chicago (“played by F. Murray Abraham, one of my favorite Shakespeare actors, the best Shylock I have ever seen”), “plays ‘The Death of Queen Jane’ beautifully, hauntingly, pouring himself into it. The song, which can break your heart, comes to an end. After a few seconds of silence, Grossman tells him: ‘I don’t see a lot of money here.’ The scene is perfectly rendered. And crushing. And every creative person’s worst nightmare.”

Fortunately, productions of Shakespeare’s plays—and the creative people responsible for them—seem set to continue to make money and capture the public’s attention. Indeed, a 2017 Public Theater staging of Julius Caesar in Central Park drew controversy for transposing Caesar (and his assassination) to a modern, Trumpian setting. In Shapiro’s most recent book, Shakespeare in a Divided America (2020), he examines how each new arrangement of the plays reflects or interacts with its time and place, culminating in the contretemps over that production. I asked if we were doomed to keep reliving the conflicts and tragedies that keep Shakespeare so relevant, or whether the plays themselves offer some way out of that fate. “I sometimes imagine a future in which Shakespeare’s plays have lost their edge, no longer speak to us,” he told me:

That won’t be in my lifetime. He wrote at a time when so many of the things we bitterly fight over—especially modern notions of national and racial and gendered identity—were more or less invented. We read and stage his plays—far more often than those of his remarkable contemporaries—because they are built upon these constructs, explore their fault lines. We haven’t worked through any of these issues very well, which is one of the reasons why we keep turning to his plays. It’s not pessimism as you describe, or fatedness, but our lived reality.

And finally, I asked the Shakespearean scholar which plays he recommends this season:

One of the upcoming productions I’m most excited to see is The Merchant of Venice, at Theatre for a New Audience [and, later in the season, at the Shakespeare Theatre Company in Washington D.C.], directed by Arin Arbus, and starring John Douglas Thompson as Shylock. If I’m not mistaken, it will be the first time that a Black actor has played Shylock professionally in New York City. Ira Aldridge starred in the role two hundred years ago, but as a Black actor had to leave America to play the part, in Britain and on the continent. I’m also incredibly excited about the pair of productions that will be staged at the Delacorte in Central Park this summer. Information on what they will be is currently embargoed, or I’d happily share it. All I can say is: get in line early.

Best of The New York Review, plus books, events, and other items of interest

James Shapiro is the Larry Miller Professor of English at Columbia. His most recent books are The Year of Lear: Shakespeare in 1606 and Shakespeare in a Divided America.  (January 2022)

Daniel Drake is the production editor of The New York Review of Books.

Halfway to the Right

Regina U. Gramer, reply by David A. Bell

“Many of my closest friends are poets, and it seems like a pretty serious affliction.” 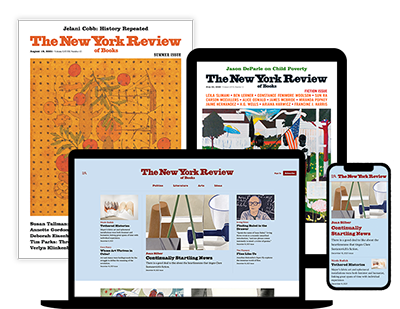 Get immediate access to the current issue and over 20,000 articles from the archives, plus the NYR App.