Get the free mobile apps

Get the latest news from us on our apps.

Welcome to the United Nations

While Ghana is an “oasis of peace and tranquility” in West Africa and is moving increasingly towards consolidating democracy, its progress remains “fragile,” concludes a comprehensive African review of the country. The analysis, released publicly in mid-2006, was the first one completed under the African Peer Review Mechanism (APRM), a scheme through which African states voluntarily assess each other’s political and economic management, or “governance.” 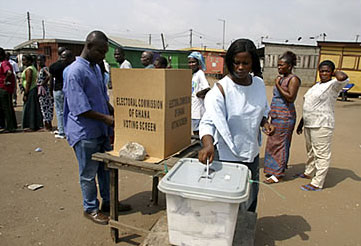 Ghana is consolidating its democracy, with three national elections since 1992 and a smooth transition between presidents and parties.

The mechanism is an outgrowth of the New Partnership for Africa’s Development (NEPAD), adopted by African leaders in 2001 as the continent’s development framework. The APRM is open to all members of the African Union (AU) and so far about half (25) have joined.

Ghana, which nearly half a century ago became the first colony in sub-Saharan Africa to gain its independence, promptly welcomed the opportunity to also become the first to undergo the innovative review process. The APRM, says Mr. Kojo Assan, Ghana’s NEPAD director, reflects a “moral contract to ensure that African leaders and their people adhere to the tenets of NEPAD,” which include good governance, peace, economic and social development and closer cooperation among African countries.

According to Mr. Abdoulie Janneh, executive secretary of the UN Economic Commission for Africa, completion of this first review has been significant not only for Ghana, but for the continent as a whole. “The peer review of Ghana is an important milestone for the improvement of governance in African countries,” he said in January in Khartoum, Sudan, where Ghanaian President John Kufuor underwent four hours of questioning by other African heads of state as part of the process.

Ghana’s review, seen as the first indicator of the seriousness and credibility of the APRM process, provoked interest far beyond the country’s own borders. Many asked: How forthright and critical would the review be? How would the government respond?

The meeting in Khartoum, held on the sidelines of an AU summit, was the culmination of a process that began in March 2003, when Ghana formally acceded to the APRM. A year later the government appointed a national governing council to organize a “self-assessment” in which Ghanaians from all walks of life would identify issues they considered important. None of the seven members was in government, coming instead from academia, the legal profession, business and other sectors.

Despite the council’s formal independence, civil society groups were initially skeptical and demanded more input into its consultations, reports Mr. Steven Gruzd, a researcher at the South African Institute of International Affairs. In response to such pressure, he finds, “government ceded considerable space to civil society, and a more transparent and credible review resulted.” 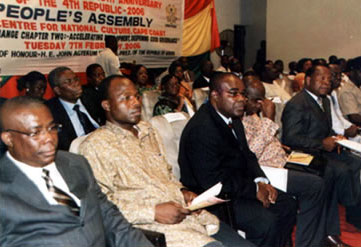 A February 2006 meeting of Ghana’s People’s Assembly, in which citizens directly question the president.

Much of the practical work in gathering public views about the strengths and weaknesses of Ghana’s system was conducted by four reputable and independent local research institutes, including the Centre for Democratic Development (CDD), which focused specifically on democratic political governance. The three others looked at economic management, corporate governance and socio-economic development. They conducted opinion surveys and produced reports totaling 1,200 pages. These studies, along with the results of other consultations, fed into the governing council’s self-assessment report.

A member of the APRM’s panel of eminent persons, Mr. Chris Stals, former governor of South Africa’s Reserve Bank, then led a 16-member mission to Ghana for further discussions. The members, from 12 different African countries, toured all 10 regions of Ghana and spoke with members of the government, opposition parties, Parliament, civil society, the media, academics and professional bodies. The team then produced the final Country Review Report of the Republic of Ghana.*

The report notes that the peer review, as the “crown jewel” of NEPAD, is a demonstration of the new commitment by African leaders to improve the way in which they operate and interact with their citizens. The APRM’s notion of governance is a broad one, encompassing management of virtually all sectors of society — from the top echelons of political power to business, the media, civil society and local communities.

The report praises Ghana for holding three successful elections since the restoration of multiparty democracy in 1992, including a peaceful transition between parties and presidents in 2000. The country also boasts a number of institutions that are “unique” in Africa and help “demystify” the process of government. These include a People’s Assembly, first instituted in 2001, in which Ghanaians are able to directly question the president.

But the report also highlights shortcomings. It criticizes the large size of the cabinet — consisting of 88 full or deputy ministers at the time of the report — and the fact that many of the ministers are sitting members of Parliament, which is seen as undermining the separation of powers between the executive and legislature. The independence of the judiciary is also restricted, and the executive has at times interfered in court cases. For most Ghanaians, who cannot afford legal representation, the court system is simply inaccessible.

Numerous local conflicts exist, often over land tenure differences and disputes over succession to chiefly titles, while the system of decentralized government “is not working as it should.” The police and other uniformed services continue to carry out abuses, including extrajudicial killings. Few women are in key decision-making positions and only 19 of the 200 members of Parliament are women.

According to a household survey conducted by the CDD, three-quarters of Ghanaians regarded corruption as a serious problem, with 80 per cent feeling it had worsened over previous years. The APRM report urges that sufficient resources be allocated to Ghana’s various anti-corruption watchdog bodies so they can better curb the malady.

The report notes that although Ghana was one of the first African countries to implement sweeping economic reforms in the 1980s and succeed in restoring economic growth, the economy remains vulnerable to external shocks, most notably through its dependence on exports of cocoa, which has seen a drastic fall in its world price in recent years.

Ghana’s economic management exhibits a “heavy reliance on external resources” for financing development projects, the report adds. This has impelled the authorities to accept macroeconomic guidance from the International Monetary Fund and World Bank, while often ignoring policy advice from local research institutes, businesses and other sectors. “Some of the political elites are simply insensitive to feelings at grassroots level.” Partly as a result, “certain social priorities are subordinated,” and “to many, the role of the state is being redefined without adequate consultation with relevant national stakeholders.”

The chapter on corporate governance observes that many Ghanaian businesses operate with few ethics and little transparency; awareness of corporate responsibility is low. Child labour remains widespread and the government needs to be more proactive to ensure that environmental standards are met by mining, logging, construction, fishing and other businesses.

Ghana’s human development ranking has “improved remarkably” between 1975 and 2004, the review observes, but key areas of social development still lag significantly. Only about 16 per cent of Ghanaians living in rural areas have access to electricity or pipeborne water. Many schools have been built, raising overall enrolment rates, but without enough new teachers, the quality of education has declined. More than 54 per cent of females of 15 years or above have never been to school or are illiterate. Ghana has lost nearly a third of its health personnel to emigration abroad.

The report pointedly notes wide regional disparities, with the three northern regions and parts of coastal Ghana having high poverty levels and “lagging far behind the rest of the country” in access to basic services such as water, electricity, health care, roads, nutrition and education.

When President Kufuor responded to questions and comments from other African heads of state at the January 2006 meeting in Khartoum, he heartily welcomed both the APRM report and the criticisms of his peers.

But in the government’s first official response to the APRM report in June 2005, it took issue with some of the report’s observations and suggestions, such as the recommendation to permit partisan politics in the elected District Assemblies. Placing a cap on the number of ministries fell outside the constitution, the government maintained. In Khartoum, however, President Kufuor seemed to soften his stance, noting that a referendum could be organized to amend the constitution, if changes are needed. Then at the end of April 2006 he carried out a major cabinet overhaul, which included reducing the number of ministers from 88 to 70.

Other initiatives include one to establish an institute to help increase the capacities of local governments, and one to repeal the libel law to make it easier for the news media to expose instances of corruption. Reinforcing the APRM review’s criticisms of the amount of poverty in Ghana’s northern regions, members of Parliament, civil society groups and others held a two-day meeting in the northern town of Tamale in July to demand “affirmative action” to redress the north’s historical disadvantages.

To further strengthen governance in Ghana, the government also drafted a detailed and comprehensive Programme of Action to address the shortcomings highlighted by the review. Initially, the government estimated the total cost of these new measures at US$2.8 bn, but by the time of the Khartoum meeting the estimate had risen to $5 bn. President Kufuor hoped that donors and investors would be more forthcoming now that Ghana has undergone its peer review. The completion of the APRM, he said, “demonstrates our commitment to democracy and good governance as prerequisites for development.”

* Available on various Ghanaian websites, as well as on the official NEPAD site: <www.nepad.org/2005/files/aprm/APRMGhanareport.pdf>

Also in this issue

More from this author 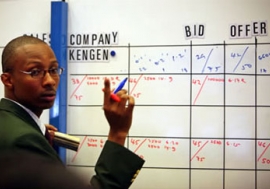 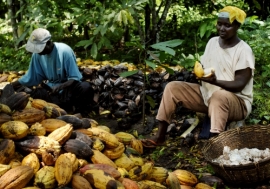 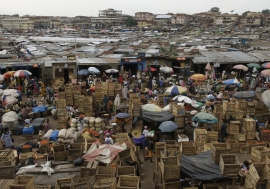 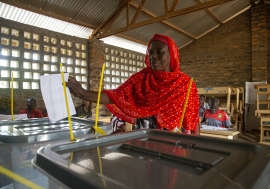 Elections in Africa go on amid COVID-19 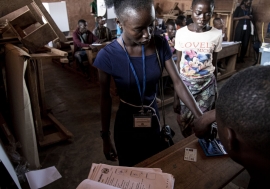 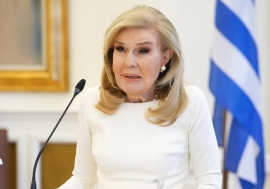 “It is worth fighting for even one child’s life”